The following documents were produced by the U.S. Army Special Operations Command (USASOC) Assessing Revolutionary and Insurgent Strategies (ARIS) studies program which features research conducted by the National Security Analysis Department of The Johns Hopkins University Applied Physics Laboratory.  The research follows along the tradition of the “Special Operations Research Office (SORO) of American University in the 1950s and 1960s.”  Along with these casebooks and studies, individual histories of revolutionary and counterrevolutionary activities in Greece, Guatemala, Algeria and Cube are also available from their website.

The Assessing Revolutionary and Insurgent Strategies (ARIS) series consists of a set of case studies and research conducted for the US Army Special Operations Command by the National Security Analysis Department of The Johns Hopkins University Applied Physics Laboratory.

The purpose of the ARIS series is to produce a collection of academically rigorous yet operationally relevant research materials to develop and illustrate a common understanding of insurgency and revolution. This research, intended to form a bedrock body of knowledge for members of the Special Forces, will allow users to distill vast amounts of material from a wide array of campaigns and extract relevant lessons, thereby enabling the development of future doctrine, professional education, and training.

From its inception, ARIS has been focused on exploring historical and current revolutions and insurgencies for the purpose of identifying emerging trends in operational designs and patterns. ARIS encompasses research and studies on the general characteristics of revolutionary movements and insurgencies and examines unique adaptations by specific organizations or groups to overcome various environmental and contextual challenges.

The ARIS series follows in the tradition of research conducted by the Special Operations Research Office (SORO) of American University in the 1950s and 1960s, by adding new research to that body of work and in several instances releasing updated editions of original SORO studies.

Among the most prominent theorists in nonviolent revolution is Dr. Gene Sharp, whose compilation of nonviolent resistance tactics is included in Table 10-1. Operationalizing those who condemned violence from Gandhi to Thoreau, Sharp’s key theme is that political power is not derived from the intrinsic qualities of those in positions of authority. Rather, the power of any state is derived from the consent of the governed, and thus they possess the moral and political authority to take it back. Essentially, leaders lack power without the consent of the governed, and because the state may hold the monopoly on the use of force, nonviolent methods are the ideal means for the people to impose their will on the state. The arsenal of the passive resister contains a number of weapons of nonviolence. One reason these weapons may be effective is that the government forces may not know how to cope with nonviolence. Police and soldiers are trained to fight force with force but are usually “neither trained nor psychologically prepared to fight passive resistance.”

Actions of passive resistance may range from small isolated challenges to specific laws to complete disregard of governmental authority, but the techniques of nonviolent resistance have be classified into three general types: attention-getting devices, noncooperation, and civil disobedience. 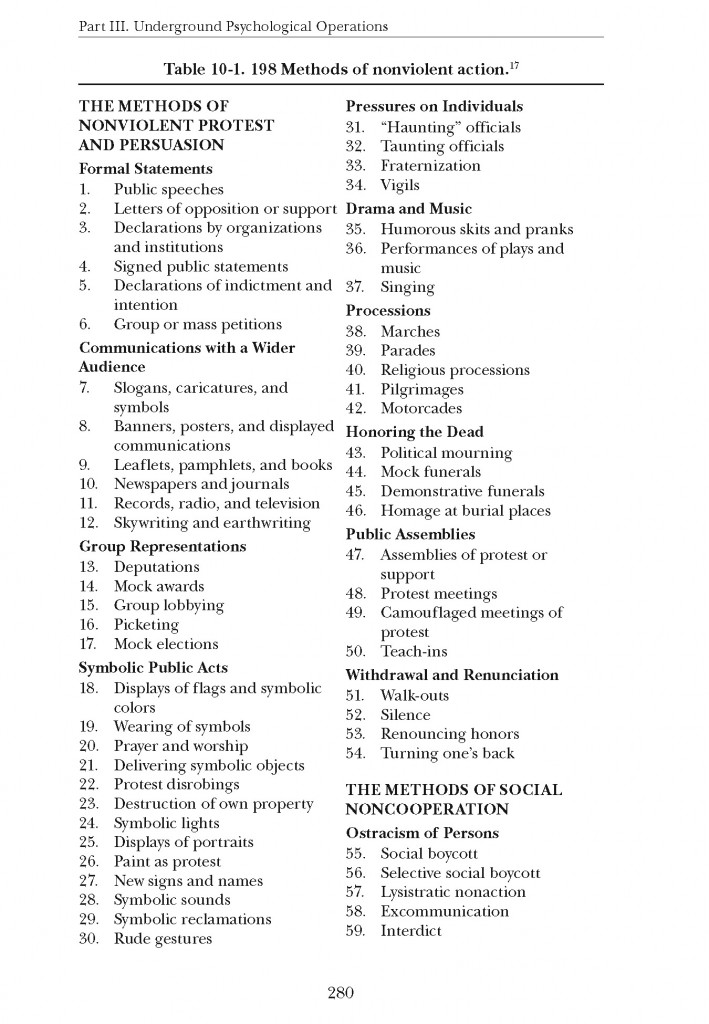 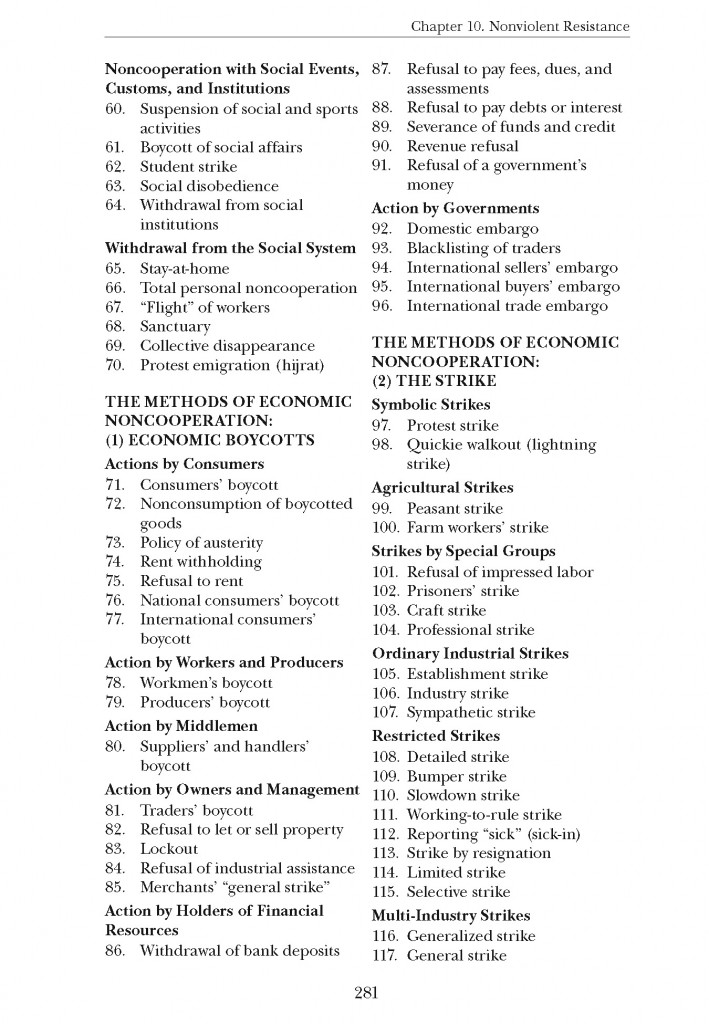 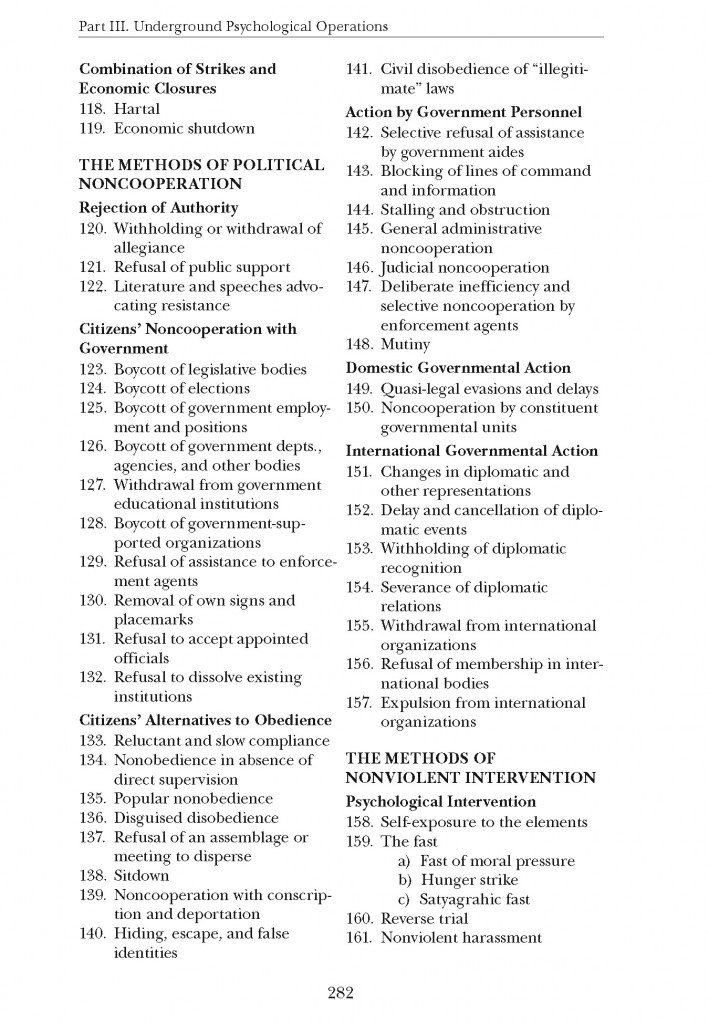 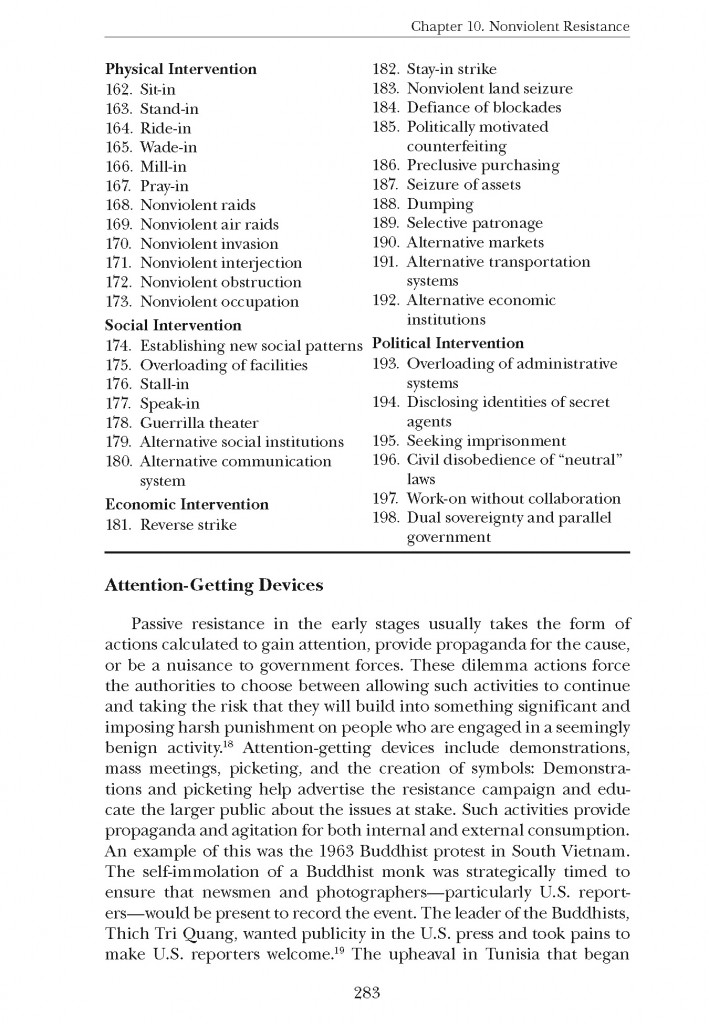 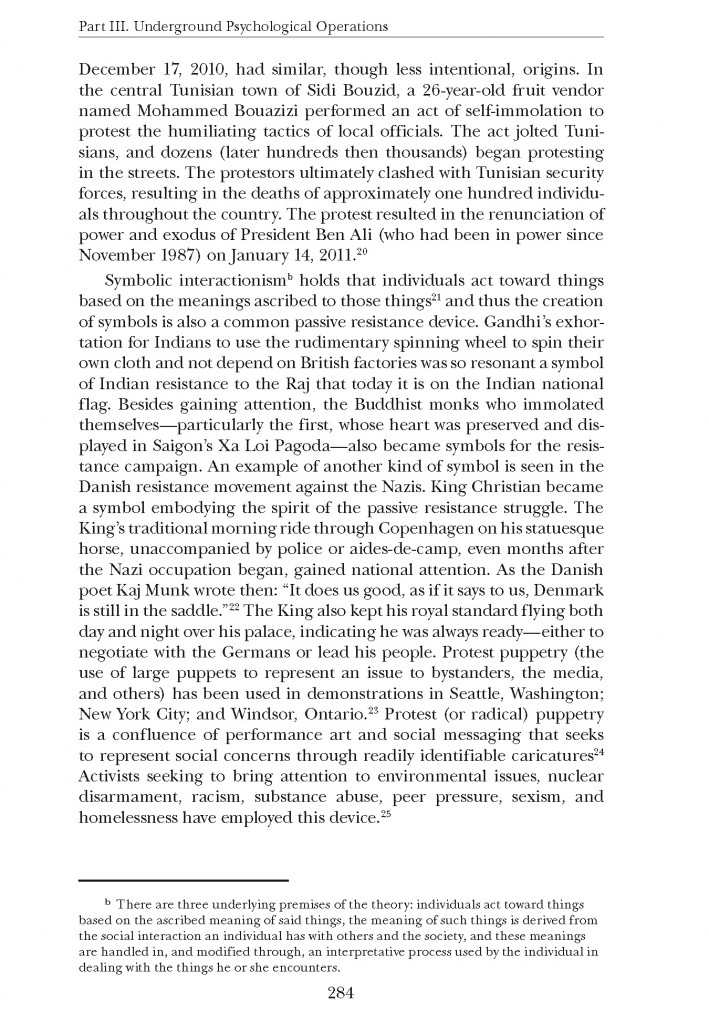