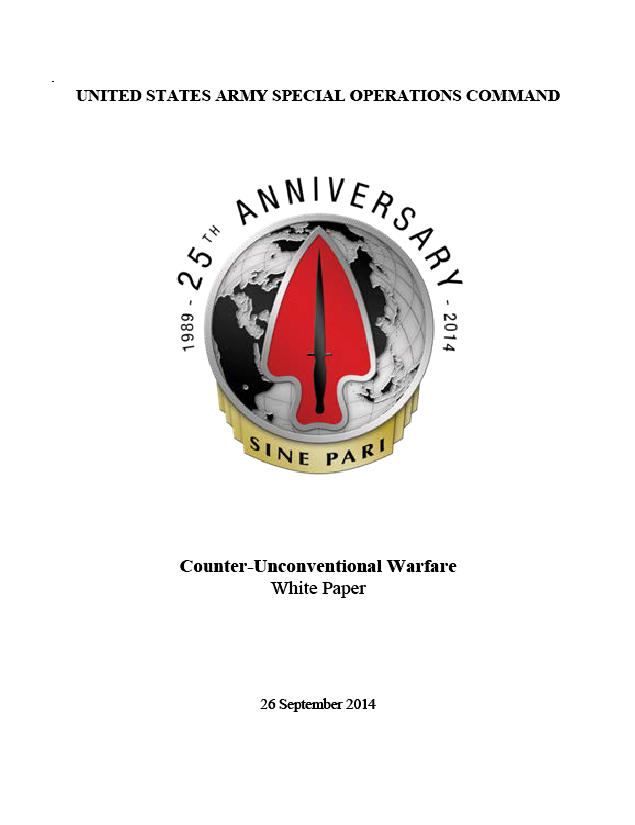 Hybrid Warfare involves a state or state-like actor’s use of all available diplomatic, informational, military, and economic means to destabilize an adversary. Whole-of-government by nature, Hybrid Warfare as seen in the Russian and Iranian cases places a particular premium on unconventional warfare (UW). As such, a response capitalizing on America’s own irregular and unconventional warfare skills, as part of a whole-of-government and multinational strategy, can best counter actions of emergent adversaries to destabilize global security. Counter-Unconventional Warfare (C-UW) should thus prove central to U.S./NATO security policy and practice over the next several decades.

The Geopolitical Context: From Resurgent UW to Counter-UW

C-UW is a relatively new term coined by veterans of global special operations, who have combined a keen grasp of emerging challenges to international security with lessons learned from our struggle against violent extremism from rising states and non-state actors. C-UW begins with an understanding of unconventional warfare (UW) itself, defined in Joint doctrine as “activities conducted to enable a resistance movement or insurgency to coerce, disrupt, or overthrow a government or occupying power by operating through or with an underground, auxiliary, and guerrilla force in a denied area.” Central to Irregular Warfare (IW), UW involves external parties aiding indigenous actors against governments. Such aid can involve training, organizing, recruiting, operational advising, coordinated diplomatic support, and even use of kinetic action and logistical support to increase the advantage of indigenous insurgents or rebels.

Over the past decade, both states and non-state actors in Iraq, Syria, Afghanistan, Georgia, and other areas have conducted this kind of UW to coerce, disrupt, and overthrow established governments. Novel forms of UW persist even to the present moment. Among non-state actors, Sunni Jihadi extremists claiming a boundless “Islamic State” now seek to overthrow national governments, local administrations, and social-political structures in a wide swathe from eastern Syria to northwestern Iraq, replacing them with a Muslim Caliphate across the region.

Among state actors and on the very frontiers of NATO, Russia’s actions in Ukraine embrace UW fully. Russia currently employs special operations forces, intelligence agents, political provocateurs, and media representatives, as well as transnational criminal elements in eastern and southern Ukraine. Funded by the Kremlin and operating with differing degrees of deniability or even acknowledgement, the Russian government uses “little green men” for classic UW objectives. These objectives include causing chaos and disrupting civil order, while seeking to provoke excessive responses by the state’s security organs—thus delegitimizing the Kiev government. Additionally, Russian elements have organized pro-Russian separatists, filling out their ranks with advisors and fighters. Russia’s UW has also included funding, arming, tactical coordination, and fire support for separatist operations. While enabling a frequency of tactical success against Ukrainian forces putting the latter at a distinct strategic disadvantage, insurgency aided by Russian UW has gained local supporters, while intimidating dissenters into acquiescing to a separation from the government in Kiev.

Russian UW is thus the central, most game-changing component of a Hybrid Warfare effort involving conventional forces, economic intimidation of regional countries, influence operations, force-posturing all along NATO borders, and diplomatic intervention. Sponsorship of separatist insurgency in Ukraine accords well with current Russian military doctrine and strategy, which embrace “asymmetrical actions… [including] special-operations forces and internal opposition to create a permanently operating front through the entire territory of the enemy state.”

While the “Islamic State” crisis demonstrates just how cascadingly disruptive non-state UW can be, the brazen audacity of UW within Russian Hybrid Warfare has produced urgent concern among America’s NATO and non-NATO partners that Russia may apply similar approaches to other regional countries in the region with dissenting Russophile populations, such as the Baltic States, Moldova, and Georgia (Refer to Appendix B for more details on Russian doctrine).

Together, examples of state- and non-state-sponsored UW over the past decade have highlighted the requirement for C-UW expertise to meet the challenges of insurgency, Hybrid Warfare, and the shocks to international security these produce. Among the concept’s chief advocates, retired Special Forces COL David Maxwell describes counter-unconventional warfare as “operations and activities conducted by the U.S. Government and supported by SOF [special operations forces] against an adversarial state or non-state sponsor of unconventional warfare.” These SOF-supported government initiatives can “decrease the sponsor’s capacity to employ unconventional warfare to achieve strategic aims.” As C-UW campaigns are likely “protracted and psychological-centric in nature” they should “comprehensively employ political, economic, military, and psychological pressure” in order to degrade both the will and capability of an adversary to sponsor unconventional warfare. The chief advantage of C-UW is thus its focus on decreasing an adversary’s ability and will to persist in Hybrid Warfare or to support elements of a resistance or insurgency.

Develop Strategies and Policies. We have seen that the future operating environment will feature state competition for regional and global influence, frequently in the form of ideological battles in the human domain. Russia, China, and Iran currently conduct political warfare activities to further their individual goals. By contrast, the U.S. has “gotten out of the habit of waging political warfare since the end of the Cold War” focusing instead on “public diplomacy aimed at ‘telling America’s story.’” C-UW should thus be scoped as a strategy enabling the U.S. to influence local struggles in a positive direction, and policies should be developed assigning political warfare as a core mission of government agencies responsible for C-UW doctrines and capabilities. Several synergistic initiatives serve this goal:

1) Establish Political Warfare Strategies. George Kennan’s definition of political warfare emphasizes both overt and covert activities “short of war.” There are many such activities applicable to countering adversary strategies. The following comprises a sampling:

Related to this Directive, the Council on Foreign Relations recommends the current counterterrorism apparatus as a useful example of what might serve for political warfare. It suggests the following key points at the strategic level:

3) Develop Political Warfare and C-UW Strategies Nested across Multiple Echelons. Political warfare and C-UW strategies and policies must be planned, coordinated, and synchronized from the strategic national level down to the tactical level. Kennan is again suggestive in this regard. At the strategic level, he recommended a covert political warfare operations directorate or board under the NSC Secretariat, with the director designated by and responsible to the Secretary of State. In this approach, the directorate’s staff would be divided equally between State Department and Defense Department representatives selected by the Secretaries, and the directorate would have complete authority over covert political warfare operations.

Taking an approach inspired by Kennan’s suggestions, an NSC director for political warfare or C-UW activities should oversee development of policies and directives; prioritize efforts and manage interagency concerns; coordinate activities and funding across the government; and provide oversight for the implementation of Presidential Policies or Directives. The Department of State would be the lead for political warfare and C-UW activities, with other Departments and Agencies in a supporting role.

Given State Department leadership in C-UW, in appropriate countries, The U.S. Country Team, , should be the focal point to plan, coordinate, and synchronize political warfare and C-UW activities. Led by the Ambassador, The Country Team will develop specific country plans and strategies for U.S unilateral activities, integrating host nation activities to obtain mutual objectives.