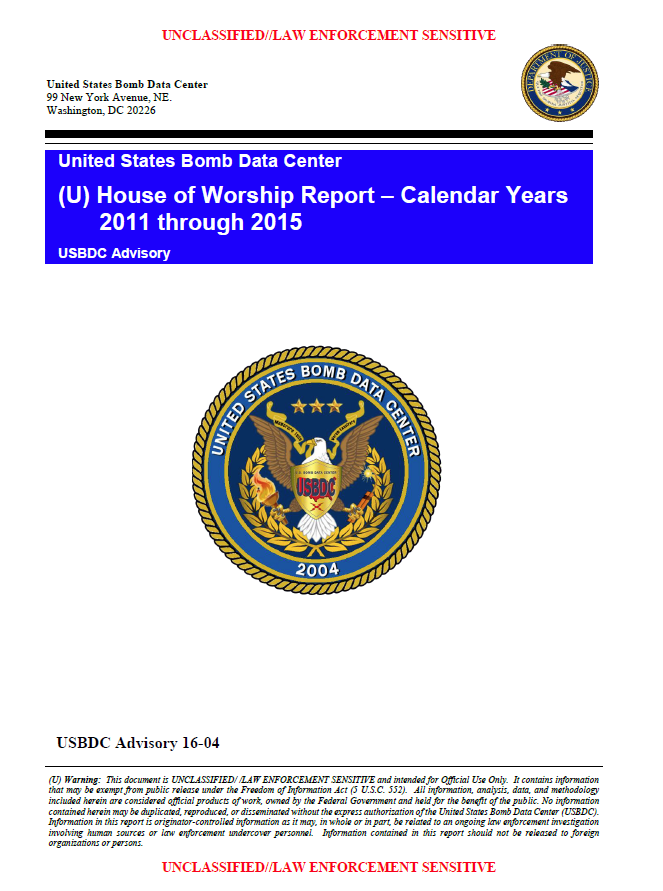 (U//LES) This report serves to present information and analysis associated with fire, arson, and bombing incidents at houses of worship (HOWs) occurring within the United States for the past 5 years, between January 2011 through December 2015, and reported to the Bureau of Alcohol, Tobacco, Firearms and Explosives (ATF). In total, there were 733 fire and explosion related incidents, per ATF reporting, for all 50 States. The information contained herein does not represent all fire, arson and bombing incidents for the United States. This report only represents those incidents that have been reported to and investigated by ATF.

(U//LES) For the past 5 years, ATF reported 733 fire and explosion related incidents associated with houses of worship. Of those incidents, 156 were determined to be accidental, 15 were bombings, 316 were incendiary fires, and 233 were undetermined fires; “other” incidents totaled 13, for (attempted arson, threats, and recovery of an incendiary device).34 In addition, ATF reported 16 persons injured and 6 persons killed within the past 5 years.

(U//LES) Figure 1 illustrates all categories of HOW incidents for the past 5 years. All incidents appear to be on average with the exception of incendiary and undetermined fires. Both of these incident types tend to have similar numbers each year; however, the numbers have increased within CY 2015.