The following analysis of Chinese investments in the U.S. economy was released November 7, 2012 by the U.S.-China Economic Security Review Commission. 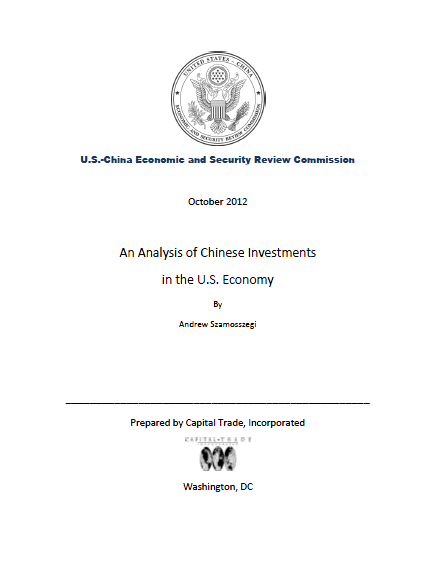 First, the Chinese government has made a conscious decision to diversify its foreign currency assets into hard assets. This has led to the creation of sovereign wealth funds that make portfolio investments in U.S. equities, private firms, and real estate.

Second, the Chinese government has altered its policy guidance toward foreign direct investment (FDI). Whereas it previously encouraged investments almost exclusively toward energy and resource acquisition in developing countries, it now also encourages investments in advanced countries. The government’s goals for these investments include securing energy and mineral resources and acquiring advanced technologies in industries where China wishes to leapfrog existing competitors.

Third, U.S. state governments and, to a lesser extent, the federal government are vigorously trying to attract Chinese greenfield investments in the hope of creating jobs and jump-starting local economies.

Fourth, Chinese investments are being drawn to the United States by the availability of financially weak firms, some of which possess potentially useful technologies for China.

Fifth, some firms that are already competitive with U.S. producers are investing to enhance their U.S. market shares or in response to trade remedies proceedings against unfair trade practices, such as Chinese subsidies.

On an aggregate basis, the economic benefits of Chinese investments in the United States have been modest. The precise benefit is difficult to measure due to the convoluted ownership structures of many Chinese investments and the time lags in official U.S. data. Still, based on a combination of official and private data, it is reasonable to conclude that jobs in Chinese-owned companies in the United States increased by 10,000 to 20,000 workers during the past five years.

While hardly significant relative to overall U.S. employment and even to jobs in other countries’ U.S. affiliates, any job creation is welcome given continued slackness in the U.S. labor market.

Chinese investments have occurred in all U.S. regions and in many sectors. According to one private data source, they have been especially prominent since 2007 in the Southwest, Great Lakes, Southeast, and Far West regions, and in the fossil fuels and chemicals, industrial machinery, and information technology industries. According to another private source, as well as government data, the financial sector is also a major recipient of Chinese FDI.

These welcome, though still modest, economic benefits are counterbalanced by policy challenges tied to Chinese FDI. First, U.S. affiliates of Chinese companies are not pure market actors and may be driven by state goals, not market forces. China’s outward investments are dominated by state-owned and state-controlled enterprises (SOEs). These entities are potentially disruptive because they frequently respond to policies of the Chinese government, which is the ultimate beneficial owner of U.S affiliates of China’s SOEs. Likewise, the government behaves like an owner, providing overall direction to SOE investments, including encouragement on where to invest, in what industries, and to what ends.

Second, SOEs may have unfair advantages relative to private firms when competing to purchase U.S. assets. SOEs benefit from substantial subsidies in China and their investments in developing countries also receive ample financial support from the national and sub-national governments, state-owned financial institutions and local governments. Government pronouncements out of China suggest that investments in the United States and other advanced countries will also receive ample financial support. This raises the possibility that Chinese largesse could determine market outcomes for purchases of U.S. businesses.

Third, an increased SOE presence may be harmful to the U.S. economy. In China, SOEs are a major force but as a group they are less efficient and profitable than private firms. To the extent that SOEs purchase U.S. companies on the basis of artificial advantages and operate inefficiently, they may not be beneficial to long-term U.S. economic performance.

Fourth, Chinese investments will create tensions related to economic security and national security if they behave in accordance with China’s industrial policy as articulated in the 12th Five Year Plan, government pronouncements, and official investment guidance. China’s current policy guidance directs firms to obtain leapfrog technologies to create national champions in key emerging industries, while investment guidance encourages technology acquisition, energy security, and export facilitation. Based on this juxtaposition, some will conclude that Chinese FDI in the United States is a potential Trojan horse. Indeed, this study describes three investments in new energy products after which production utilizing the desired technology was shifted to China.
Other Findings

U.S. data collection efforts related to FDI are substantial. However, they likely undercount Chinese FDI due to the complicated ownership structures of many Chinese investments. Moreover, although Chinese-owned companies report their data to the U.S. government, many data points are not publically disclosed due to standard U.S. reporting procedures that protect the identities of individual firms. This issue will resolve itself in the coming years if Chinese FDI grows as expected because limits on disclosure will no longer apply.

The United States is relatively open toward FDI, though there are some sectoral restrictions and a national security review undertaken by the Committee on Foreign Investment in the United States (CFIUS). There are a host of laws that subject foreign investors to rules on antitrust, foreign corrupt practices, and trade in arms and sensitive technology products. However, there is no procedure that explicitly considers issues related to economic security, one of the major concerns about Chinese FDI.

Portfolio investments in equities fall under the purview of the Securities and Exchange Commission (SEC). SEC disclosure requirements and practical considerations make it highly unlikely that Chinese SOEs could successfully collude to accumulate significant equity positions in important U.S. firms.

Reverse mergers offer a back door into U.S. capital markets but are not an effective way to acquire important U.S. assets. Indeed, the target of a reverse merger is typically a shell company devoid of meaningful assets. This technique is typically used by private firms that have difficulty accessing capital in China or by provincial SOEs trying to support restructuring efforts in China. There is no indication that any major SOE has used or plans to use this technique to enter the U.S. capital market.

The Chinese legal and regulatory framework for outward FDI requires approvals by three agencies at sub-national and/or national levels. For SOEs, the primary gatekeeper is the State-owned Assets Supervision and Administration Commission (SASAC), though for some investments approval from the State Council is required. The process is widely considered to be cumbersome and is being reformed to facilitate outward FDI. 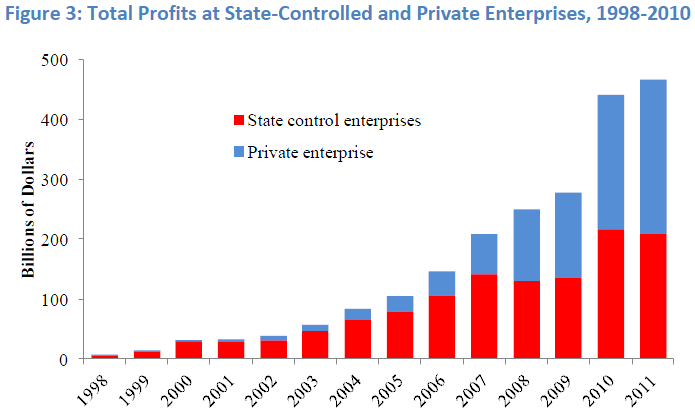 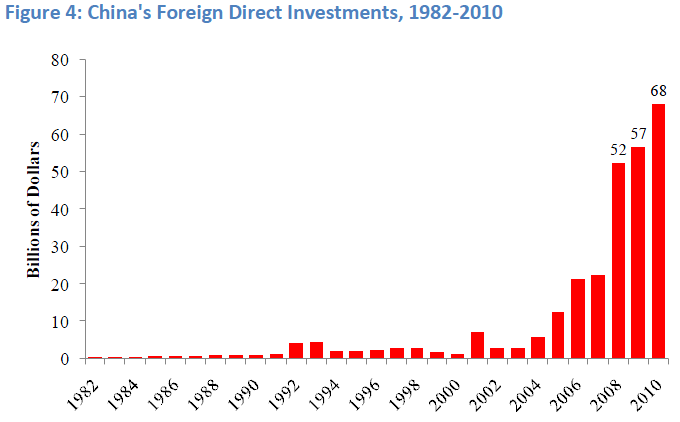 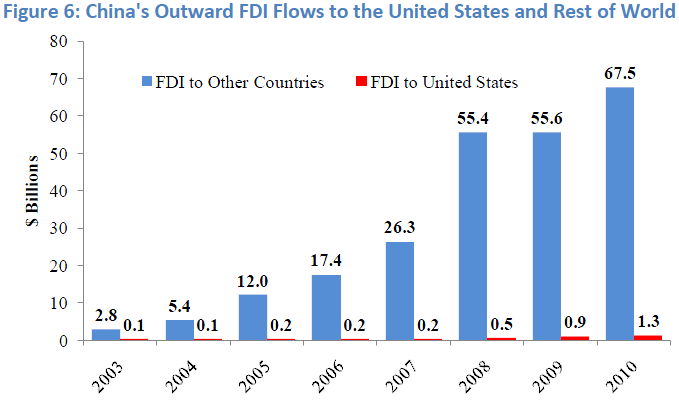