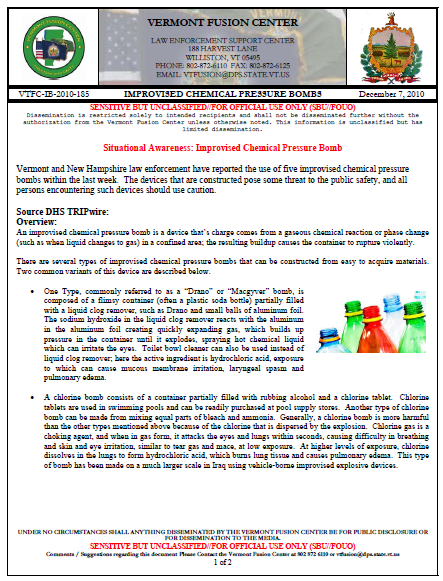 An improvised chemical pressure bomb is a device that’s charge comes from a gaseous chemical reaction or phase change (such as when liquid changes to gas) in a confined area; the resulting buildup causes the container to rupture violently. There are several types of improvised chemical pressure bombs that can be constructed from easy to acquire materials. Two common variants of this device are described below.

Chemical pressure bombs of the size mentioned here are most often used as an annoyance, or for petty vandalism rather than cause casualties. They can be made as innocent science projects or used as pranks.

There are several reasons for law enforcement to be concerned about such devices.

Those wishing to cause maximum harm could wrap the container with nails or place the device in a garbage can or other metal or glass container in order to boost fragmentation; however, fragmentation will still be relatively limited since these bombs lack high explosive power.

These devices are often placed in mailboxes, which will cause fragmentation when detonated, but the motivation behind mailbox attacks seem to be intended as a prank rather than to inflict injury.