The following report was released to law enforcement around the country by the Virginia Fusion Center in April 2013.  It describes law enforcement concerns related to the use of Tor, Bitcoins and other services allowing greater anonymity online. 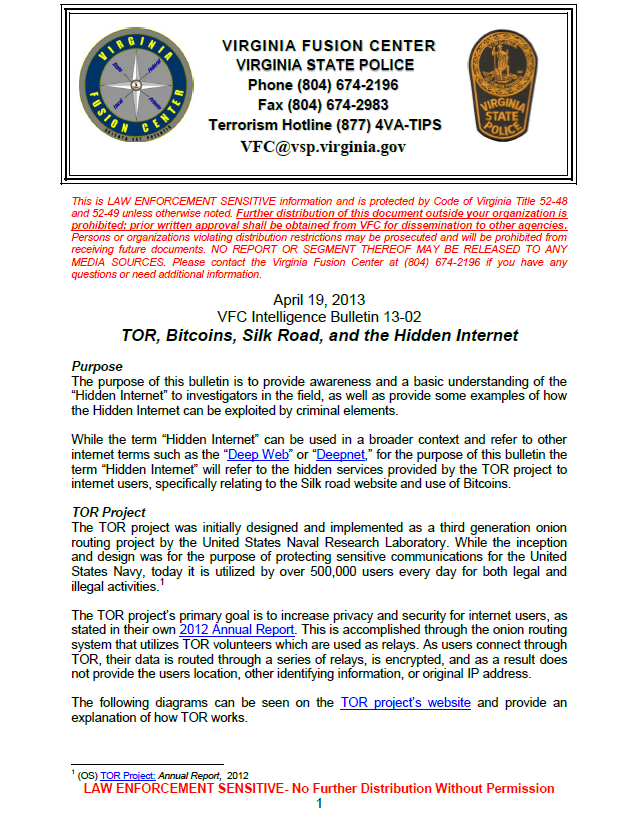 The purpose of this bulletin is to provide awareness and a basic understanding of the “Hidden Internet” to investigators in the field, as well as provide some examples of how the Hidden Internet can be exploited by criminal elements.

The TOR project was initially designed and implemented as a third generation onion routing project by the United States Naval Research Laboratory. While the inception and design was for the purpose of protecting sensitive communications for the United States Navy, today it is utilized by over 500,000 users every day for both legal and illegal activities.

The TOR project’s primary goal is to increase privacy and security for internet users, as stated in their own 2012 Annual Report. This is accomplished through the onion routing system that utilizes TOR volunteers which are used as relays. As users connect through TOR, their data is routed through a series of relays, is encrypted, and as a result does not provide the users location, other identifying information, or original IP address.

It is important to note that the use of TOR is not illegal in and of itself. Further, the use of TOR provides a service that can be a useful tool both to individuals personally, for governments, and law enforcement personnel. For example, TOR can provide an investigator a level of anonymity while conducting investigations covertly on the internet, such as attempting to monitor a suspect’s Facebook or Myspace account without the risk of identifying the investigators location or IP address.

A Bitcoin is “a digital currency, a protocol, and a software that enables; Instant peer to peer transactions, and Worldwide payments” which allows users to conduct online transactions without the use of standard regulated world currencies. For law enforcement, the use of Bitcoins in conjunction with the Hidden Internet, poses a great challenge.

Bitcoins can be purchased several ways, including online exchanges (Mt. Gox being the most common), private companies, or individuals who have Bitcoin holdings already. To begin trading in Bitcoins all a user needs to do is choose a wallet and install it on a computer or smartphone/tablet. Once the user has the wallet they are able to send and receive Bitcoins.

Bitcoins are not regulated or insured by any government or banking system. As such, the use of Bitcoins, the terminology, and execution are extremely technical and will not be covered in this bulletin but the explanations and descriptions are widely available on the Internet.

As is the case with the use of TOR, the purchase, receipt, and use of Bitcoins is not illegal in and of itself and perfectly legitimate transactions are made such as paying for clothing, hotels, restaurants, and allowing individuals or groups to make anonymous donations4. However, with the limited exposure to detection and high potential for profit, the use of TOR and Bitcoins has laid the foundation for the exploitation of these services by criminal elements.

The Silk Road is a hidden website that can only be accessed using TOR or other services (such as Onion.to) that will route through TOR. The hidden net address for The Silk Road Anonymous Marketplace is: http://silkroadv5p5cbl6.onion/.

For the purposes of this bulletin, the Virginia Fusion Center (VFC) established, through the use of TOR, a Silk Road account. The following are screen shots of the site from initial logon, to browsing. For any individual who is comfortable with the internet the entire process can take only minutes.

The following screenshots show the initial account set up screen, login screen, as well as browsing screen shots of items that could be purchased from the site. For the purposes of this bulletin, a covert screen name was utilized. The screenshots are simply samples of the items listed on the site, and in no way are all inclusive.

While the Silk Road is believed to be the largest and most well-known of the hidden sites, there are others such as “Black Market Reloaded”, “Deep Web Weapons”, “Gun Guys Den”, and “Behind Bloodshot Eyes”, amongst others.