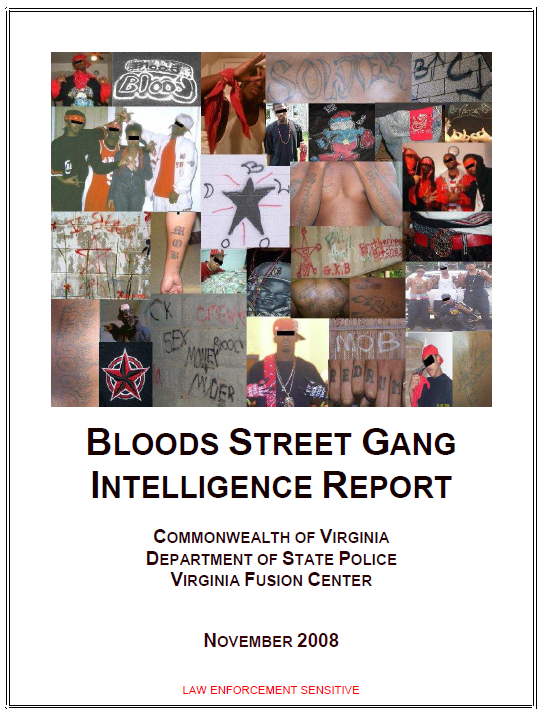 The Bloods street gang has become one of the most violent and notorious criminal organizations, spreading its influence in the U.S. from coast to coast. A traditionally African American gang, Bloods membership today includes Caucasians, Hispanics, and Asians. Blood members are involved in a variety of criminal activities including murder, assault, robbery, and narcotics distribution. Nationally, gang membership in the Bloods has been estimated between 15,000 and 20,000 members.1 Blood sets range from highly organized and structured groups similar to the Italian Mafia to loosely organized cliques with little discipline and loyalty. The Bloods have grown in popularity over the years thanks in part to the proliferation of music, movies, and television shows glorifying the “gangsta” lifestyle as well as social networking sites and the vast amount of information on the gang available on the Internet. Current intelligence gathered by the Virginia Fusion Center and other law enforcement agencies indicates the Bloods are a significant criminal threat to the Commonwealth and will continue to grow in numbers and operational scope.

The Bloods, like many street gangs, have created a unique form of identification including language, apparel, tattoos, graffiti, and hand signs. The gang has created an entire subculture with variations from coast to coast and set to set.

Traditional Blood colors are red and black, but sets have been known to utilize green, brown, pink, beige, and orange as well. The colors a set chooses are determined by their influences, alliances, and preferences; however, a trend has also been noted where gangs are choosing to refrain from wearing their traditional red to deflect attention from law enforcement. Colors are worn as a sign of pride in their gang affiliation as well as an intimidation factor to non-gang members and rivals. Gang members will represent their set by “flagging,” or wearing bandanas. These bandanas or “flags” can be worn around the head, face, wrist, ankles, or in their back pocket. Having a flag is very significant to a gang member; typically flags are given at the time of initiation into the gang. It is considered disrespectful to let a flag fall on the ground and rival gang members will make a show of throwing their rival’s flag on the ground and stepping on it to show disrespect.

Beyond wearing flags to show their gang affiliation, Blood members often wear clothing, jewelry, and other accessories tied to their gang to represent their set. Any type of apparel in their traditional color of red can be exploited by gang members including clothing with cartoon characters and sports paraphernalia. Gang members may also wear handmade bead necklaces and modified rosaries in their gang colors.

Many gang members will have at least one gang related tattoo or branding. The photo to the left represents a “dog paw” and is typically made using the heated barrel of a handgun. The dog paws are very common on Bloods members and are often burned into the right shoulder or upper arm area. Gang members may refer to the dog paws as “triple Os” and the marks may be present in graffiti as well. Conventional Blood tattoos may include the word “blood,” the set name, fivepointed stars or crowns, the member’s street name, weapons, tear/blood drops, and pit bulls.19 The tattoo’s craftsmanship can range from crude jail or homemade designs to intricate professional work. Tattoos and brands, particularly the dog paws, may be given upon initiation into the gang, and they may also signify the rank of the member. When encountering suspected gang members, tattoos should be documented as they can reveal a member’s set affiliation, rank, involvement in criminal activity, and years of gang participation.

Graffiti has often been described as the “newspaper of the streets.” Careful analysis of gang graffiti can indicate the gang and set, the artist or tagger, their affiliation, rival gangs, and current gang activity. Gangs use graffiti to claim territory, and where there are several gangs present, graffiti may be marked out by rival gangs and replaced with their own. Gang members may also venture into their rival’s territory to deface property with graffiti as a sign of disrespect and a challenge to their rival. Typical gang graffiti is usually in a single color and will be simple in design. Complex and colorful graffiti is generally not gang related.

Hierarchy within the gang structure may take several different forms depending on the gang’s affiliation to the West or East Coast. Sets have been known to adopt a paramilitary structure as well as a mafia inspired hierarchy. Below are two examples of hierarchy used.

Gang sets may use additional organizational structures including ranks of ministers, captains, and lieutenants. The head of the set is typically known as an Original Gangster (OG) or Godfather. The set leader may be in contact with other set leaders but the lower level soldiers may have no knowledge of other sets, their activities, or their leadership.

Blood sets that share set names with the larger West Coast14 and East Coast Bloods may not be directly connected to the larger gangs but usually have knowledge of the gang’s history and rules. Many Blood gangs operate as independent sets although members may know or be related to Bloods in other areas. Additionally, sets may be connected through inmates in the prison system. Many small local gangs’ ties to the larger Bloods sets may be tenuous at best. These smaller sets may mimic the culture of the Bloods in terms of colors, clothing, and tattoos; however, their membership and scope of criminal activity is primarily local.