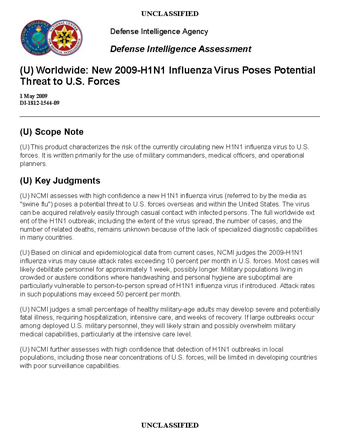 (U) Scope Note(U) This product characterizes the risk of the currently circulating new H1N1 influenza virus to U.S. forces. It is written primarily for the use of military commanders, medical officers, and operational planners.

(U) NCMI assesses with high confidence a new H1N1 influenza virus (referred to by the media as “swine flu”) poses a potential threat to U.S. forces overseas and within the United States. The virus can be acquired relatively easily through casual contact with infected persons. The full worldwide extent of the H1N1 outbreak, including the extent of the virus spread, the number of cases, and the number of related deaths, remains unknown because of the lack of specialized diagnostic capabilities in many countries.

(U) Based on clinical and epidemiological data from current cases, NCMI judges the 2009-H1N1 influenza virus may cause attack rates exceeding 10 percent per month in U.S. forces. Most cases will likely debilitate personnel for approximately 1 week, possibly longer. Military populations living in crowded or austere conditions where handwashing and personal hygiene are suboptimal are particularly vulnerable to person-to-person spread of H1N1 influenza virus if introduced. Attack rates in such populations may exceed 50 percent per month.

(U) NCMI further assesses with high confidence that detection of H1N1 outbreaks in local populations, including those near concentrations of U.S. forces, will be limited in developing countries with poor surveillance capabilities.

(U) NCMI assesses with high confidence U.S. forces worldwide (including those in the United States) are potentially vulnerable to H1N1 infection from relatively casual interactions with local populations in areas where the virus is circulating. The true geographic extent of circulation remains unknown — but NCMI judges it likely extends well beyond the countries with confirmed human cases.

(U) According to the CDC, the H1N1 virus is contagious and spreading from person-to-person. Transmission is believed to occur in the same way typical seasonal influenza spreads, mainly from person-to-person through coughing and sneezing. Individuals can also become infected by touching contaminated surfaces and then touching their nose or mouth.

(U) Operational Impact May Be Significant

• (U) Typical influenza illness is characterized by fever, cough, muscle pain, headache, fatigue, and sore throat with symptoms generally lasting 5 to 7 days. Most cases of H1N1 identified outside of Mexico appear to have displayed this level of severity.

• (U) In Mexico, an unusually high number of fatalities among healthy young adults (military-age) have been noted. According to open source reporting, the majority of fatalities in Mexico are among 25-50 year olds.

• (U) More austere military settings often have limited facilities for frequent handwashing and personal hygiene, limiting the capacity to implement one of the most basic preventive measures.

• (U) Operational military environments often are characterized by crowding (e.g., shipboard berthing, military barracks, field billeting, travel on military or civilian transports, etc.), which is strongly associated with person-to-person transmission. Outbreaks of a variety of respiratory diseases are not uncommon in crowded military populations.

(U) NCMI assesses with high confidence the degree of advanced notification of new H1N1 influenza circulation in local populations, including those near concentrations of U.S. forces, will be limited in developing countries with poor surveillance capabilities. As a result, U.S. forces in some locations may be unable to prevent substantial exposure to infected local populations. NCMI judges countries with relatively good surveillance capabilities, such as the United States, South Korea, and Japan, likely will be able to identify local H1N1 circulation within their populations. Such notification will support adoption of aggressive pandemic preventive measures in deployed U.S. forces at the earliest possible stage.

• (U) According to a United Kingdom government report, routine surveillance is absent in many developing countries, and their diagnoses and determinations of cause of death are unreliable. For additional information, see (U) Worldwide: Country Capabilities to Detect New H1N1 Influenza Virus Cases.

• (U) According to peer reviewed literature, Japan and South Korea have effective infectious disease surveillance systems that can identify significant outbreaks and disease occurrences. Diagnostic capability and disease reporting infrastructure is functional in most parts of these
countries.