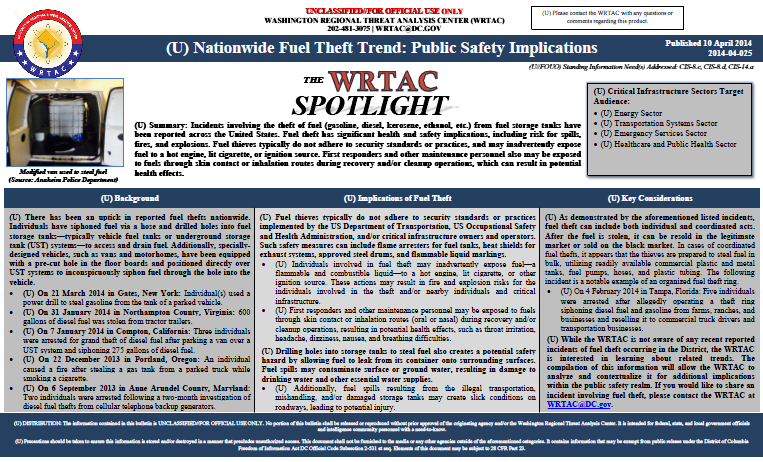 (U) Summary: Incidents involving the theft of fuel (gasoline, diesel, kerosene, ethanol, etc.) from fuel storage tanks have been reported across the United States. Fuel theft has significant health and safety implications, including risk for spills, fires, and explosions. Fuel thieves typically do not adhere to security standards or practices, and may inadvertently expose fuel to a hot engine, lit cigarette, or ignition source. First responders and other maintenance personnel also may be exposed to fuels through skin contact or inhalation routes during recovery and/or cleanup operations, which can result in potential health effects.

(U) There has been an uptick in reported fuel thefts nationwide. Individuals have siphoned fuel via a hose and drilled holes into fuel storage tanks—typically vehicle fuel tanks or underground storage tank (UST) systems—to access and drain fuel. Additionally, specially- designed vehicles, such as vans and motorhomes, have been equipped with a pre-cut hole in the floor boards and positioned directly over UST systems to inconspicuously siphon fuel through the hole into the vehicle.

(U) Implications of Fuel Theft

(U) Fuel thieves typically do not adhere to security standards or practices implemented by the US Department of Transportation, US Occupational Safety and Health Administration, and/or critical infrastructure owners and operators. Such safety measures can include flame arresters for fuel tanks, heat shields for exhaust systems, approved steel drums, and flammable liquid markings.

(U) Drilling holes into storage tanks to steal fuel also creates a potential safety hazard by allowing fuel to leak from its container onto surrounding surfaces. Fuel spills may contaminate surface or ground water, resulting in damage to drinking water and other essential water supplies.

(U) As demonstrated by the aforementioned listed incidents, fuel theft can include both individual and coordinated acts. After the fuel is stolen, it can be resold in the legitimate market or sold on the black market. In cases of coordinated fuel thefts, it appears that the thieves are prepared to steal fuel in bulk, utilizing readily available commercial plastic and metal tanks, fuel pumps, hoses, and plastic tubing. The following incident is a notable example of an organized fuel theft ring.

(U) While the WRTAC is not aware of any recent reported incidents of fuel theft occurring in the District, the WRTAC is interested in learning about related trends. The compilation of this information will allow the WRTAC to analyze and contextualize it for additional implications within the public safety realm. If you would like to share an incident involving fuel theft, please contact the WRTAC at WRTAC@DC.gov.