The following bulletin was obtained from the website of the Wisconsin EMS Association. 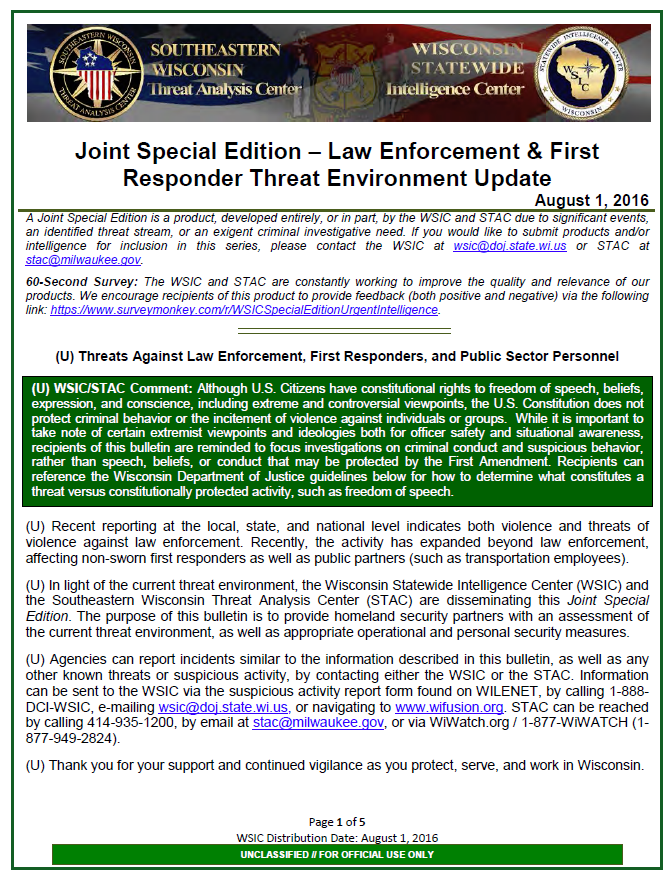 (U) Recent reporting at the local, state, and national level indicates both violence and threats of violence against law enforcement. Recently, the activity has expanded beyond law enforcement, affecting non-sworn first responders as well as public partners (such as transportation employees).

(U) In light of the current threat environment, the Wisconsin Statewide Intelligence Center (WSIC) and the Southeastern Wisconsin Threat Analysis Center (STAC) are disseminating this Joint Special Edition. The purpose of this bulletin is to provide homeland security partners with an assessment of the current threat environment, as well as appropriate operational and personal security measures.

(U) Threat Incidents in Wisconsin

(U) WSIC and STAC continue to receive information related to violence and threats of violence to law enforcement and other first responders in Wisconsin. Recent examples include:

(U) Recent Incidents in Minnesota

(U) The WSIC and STAC have also received information related to violence and threat of violence to law enforcement and other first responders in surrounding states as well. Recent examples in Minnesota include: