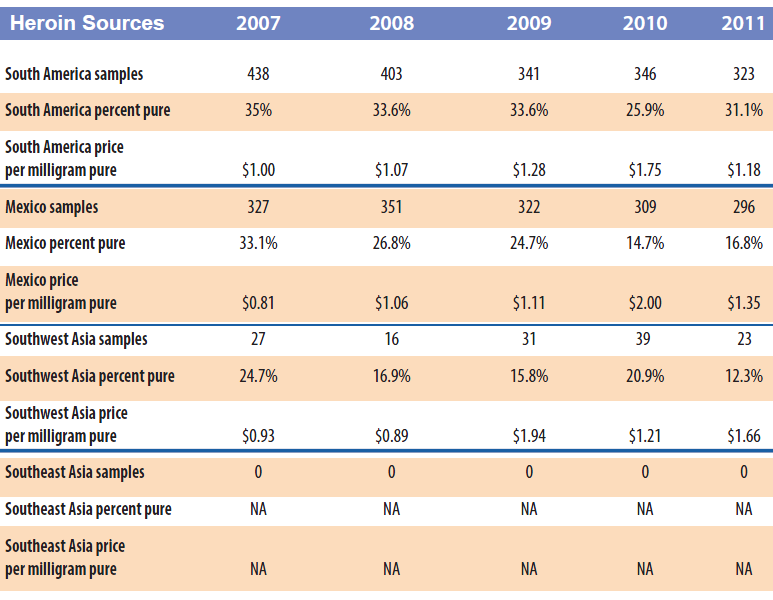 A table from the DEA’s 2011 Heroin Domestic Monitor Program Drug Intelligence Report details the origin, average price and purity of heroin samples purchased throughout the U.S.

Every year, the DEA sends undercover agents into dozens of major cities around the U.S. with a single, unorthodox mission: to purchase heroin. Since 1979, the DEA’s Heroin Domestic Monitor Program has been purchasing samples of the drug in cities around the country to track the price, purity and origin of heroin sold on American streets.

The DEA’s Intelligence Division provides funding on a quarterly basis for retail, street-level heroin purchases in 27 metropolitan areas. The samples are then sent to the DEA’s Special Testing and Research Laboratory for chemical analysis. According to the DEA, this analysis helps to “reveal changes in heroin price and purity, adulterants and diluents, use patterns, marketing practices, and drug availability.”

For several years, none of the samples purchased by the DEA have been traced back to Southeast Asia, the former center of international heroin production. Since the 1990s, the Golden Triangle, a region at the intersection of Myanmar, Vietnam, Laos and Thailand which is internationally famous for its opium production, has been superseded by the emerging Golden Crescent that runs through Afghanistan and Pakistan. After the U.S.-led invasion of Afghanistan in 2001, opium production levels began to rise steadily, reaching a peak in 2007 when Afghanistan accounted for more than 90% of global illicit opium production. However, the majority of the heroin produced in Afghanistan is trafficked into Europe and Russia. 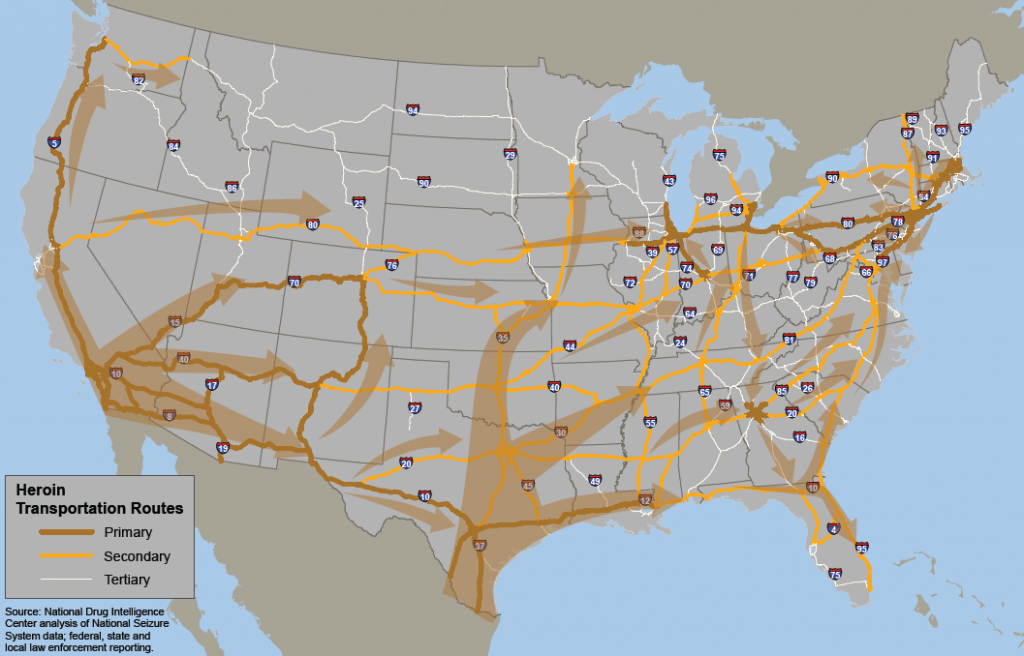 A map from the most recent National Drug Threat Assessment depicts heroin transportation routes inside the U.S. from 2008-2010.

Heroin consumed in the U.S. is produced by cartels operating in Mexico and Colombia. The quality of the product is generally declining with Mexican heroin dropping from a 33.1% average purity rate in 2007 to just 16.8% in 2011. South American heroin has similarly fluctuated, ranging from 35% average purity in 2007 to 25.9% in 2010. Price is also generally increasing with average prices per milligram of pure Mexican heroin rising from $0.81 in 2007 to $1.35 in 2011. However, averages do not fully illustrate the staggering variety in the U.S. heroin market. For example, DEA agents in Phoenix were reportedly able to purchase heroin from South America that was 83.4% pure. Philadelphia showed the highest average rate with 29 samples purchased at an average purity of 63.6%. The only city that even comes close to this figure is Newark, where 29 samples were purchased with an average purity of 46%. Most cities on the East Coast exhibited lower purity levels in the teens or twenties.

The heroin purchased in Seattle and San Francisco was found to have one of the lowest purity levels in the country at less than 4%. Cities in Texas and New Mexico which are geographically closer to the source also exhibited unusually low purity levels that were often less than 10%. By contrast, the heroin purchased in New York City, the largest heroin market in the country, has an average purity of 37.5%.

Another interesting phenomenon in the DEA’s finding is an increase in the availability of heroin of unknown origin. Due to the chemical processing involved in heroin production, DEA agents expect to find a small number of samples of unknown origin. Yet, the DEA’s monitoring program has seen the amount of unknown samples purchased in U.S. cities increase by 42% since 2005. According to the DEA, this is likely a result of the expansion of Mexican drug cartels into markets traditionally dominated by South American producers, causing their products to become mixed.