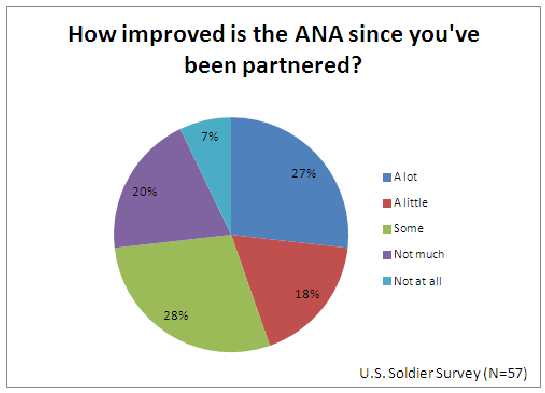 A survey conducted in late 2011 as part of the Human Terrain Team report found that 45% of the soldiers that responded believed the Afghan National Army has improved little, not much or not at all.

A research report compiled earlier this year by a group of social scientists working for the U.S. Army’s Human Terrain System found that members of the Afghan National Army (ANA) are largely seen by U.S. soldiers as unmotivated, highly dependent and making little to no progress. The report, titled “ANA and CF Partnership in Khost and Paktiya”, is based on interviews and observations made during the Human Terrain Team’s time embedded with a U.S. cavalry squadron from November to December 2011. A survey distributed to three other companies also informs much of the report’s findings, which are intended to analyze “the dynamics that influence partnering between the ANA and [coalition forces] and how they contributed to the ANA’s effectiveness in gaining the Afghan population’s support.” The soldiers’ candid responses to the survey provide a great deal of insight into perceptions of the ANA among coalition forces.

Nearly half of soldiers surveyed said the ANA has improved little, not much or not at all during their partnership. A major reason for this lack of progress is reported by U.S. soldiers to be a lack of motivation. The report lists several of the  primary reasons why Afghans join the ANA, including earning a salary and consistent employment, as well as the desire to become literate and an opportunity for education. Illiteracy among the ranks of the ANA became such a problem for coalition forces trainers that mandatory literacy programs were instituted in 2009 at the NATO Training Mission – Afghanistan (NTM-A). One trainer told the report’s authors that “I never thought when I entered Afghanistan as a senior trainer I’d be talking more about literacy training than I would about infantry training. But that is truly the case. We recognized very early on in the NTM-A time frame that we had to put a literacy program in place to compensate and mitigate the great illiteracy problem in the ranks as well as in their society.” 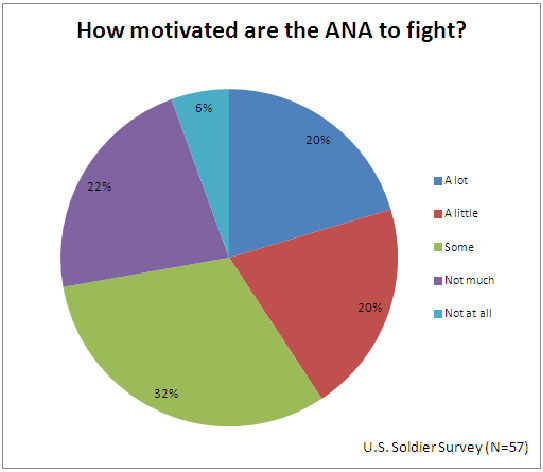 Soldiers responding to the survey are quoted as stating that the “ANA doesn’t care, they are lazy” and the “ANA have no motivation to do anything.” One U.S. Staff Sergeant said that the ANA are not interested in taking on more responsibility, adding that “We do the heavy lifting, they put a face on it.” Nearly half of soldiers surveyed said the ANA has little, not much or no motivation at all to fight. This lack of motivation often causes coalition forces to take the lead even on missions that are supposedly led by the ANA.  One soldier told the report’s authors:

In fact, 62% of soldiers responding to the survey said that so-called “ANA-led” missions are rarely or never actually planned and executed by Afghan forces. Another soldier reported that a recent “ANA-led” mission that he had been on required him to “spoon-feed” his Afghan counterpart the entire operations order and planning.

A particularly interesting finding in the report is that the views of the Afghan population often differ widely from those of coalition forces on the professionalism and respectability of the ANA. Focusing on data collected during a 2011 survey of residents in Paktiya and Khost provinces, the report finds that the ANA is widely viewed by the Afghan people as more honest, fair and professional than the Afghan National Police. The report recommends that coalition forces do a better job of incorporating the views of the population into their assessments of the ANA, as the perception of stability and legitimacy plays an important role in the overall campaign. If coalition forces cannot do this, then they have only “fought half the battle” and the Afghan National Security Forces “will be able to clear, but not to hold or build.”