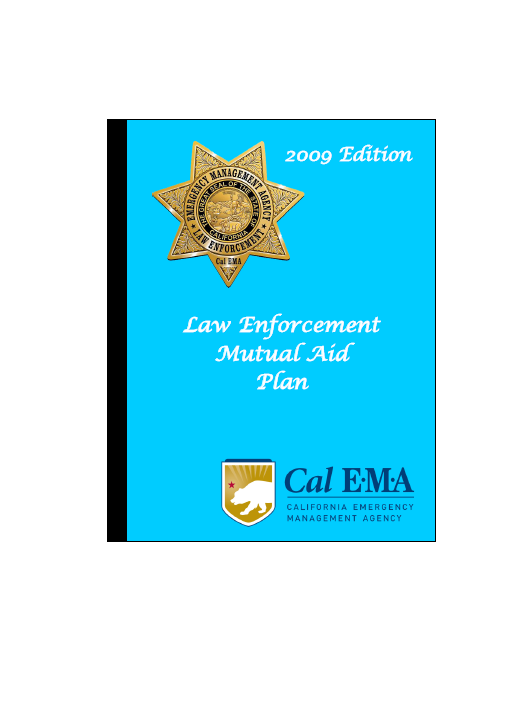 As you read this, somewhere in California one law enforcement agency is providing mutual aid to another. Mutual aid is an everyday occurrence in a state as large and diverse as California. This is the continuation of the decades-long process of “neighbor helping neighbor.” The law enforcement mutual aid system is an ongoing cooperative effort among law enforcement agencies to ensure an effective and organized response to a wide range of emergencies. There is a misconception that mutual aid is something used only during a riot or disaster. The mutual aid system has been used successfully for many other situations, including large criminal investigations, deployment of special teams such as Special Weapons and Tactics Teams, Bomb Squads, etc.

How will your agency use the mutual aid system? Planning, preparation and operational activities of law enforcement agencies in support of the mutual aid system must be consistent with each department’s policies and procedures and must also comply with the Standardized Emergency Management System (SEMS) and the National Incident Management System (NIMS).

All law enforcement executives, administrators, managers and field supervisors should familiarize themselves with this plan and its application. The personnel of the Cal EMA Law Enforcement Division are career peace officers and are available to assist you with planning, training and when necessary, emergency response coordination. It is important to note however, that Cal EMA does not “own” the mutual aid system. It is a part of California law enforcement, and those that participate each benefit – and bear part of the burden – of “neighbor helping neighbor.”

“State of War Emergency” means the condition which exists immediately, with or without a proclamation thereof by the Governor, whenever this state or nation is attacked by an enemy of the United States, or upon receipt by the state of a warning from the federal government indicating that such an enemy attack is probable or imminent. (Section 8558 (a) GC) During a state of war emergency, the Governor has complete authority over all agencies of state government and the right to exercise within the area or regions designated, all police power vested in the state by the Constitution and laws of the State of California (GC, Article 12, Section 8620 and Article 13, Section 8627, “California Emergency Services Act”). During a state of war emergency, mutual aid is mandatory. (Discussed later in the Plan.)

“State of Emergency” means the duly proclaimed existence of conditions of disaster or of extreme peril to the safety of persons and property within the state caused by such conditions as air pollution, fire, flood, storm, epidemic, riot, drought, sudden and severe energy shortage, plant or animal infestation or disease, the Governor’s warning of an earthquake or volcanic prediction, or an earthquake, complications resulting from the Year 2000 Problem, or other conditions, other than conditions resulting from a labor controversy or conditions causing a “state of war emergency,” which, by reason of their magnitude, are or are likely to be beyond the control of the services, personnel, equipment, and facilities of any single county, city and county, or city and require the combined forces of a mutual aid region or regions to combat, or with respect to regulated energy utilities, a sudden and severe energy shortage requires extraordinary measures beyond the authority vested in the California Public Utilities Commission. (Section 8558 (b)(GC))

During a state of emergency, the Governor has complete authority over all agencies of state government and the right to exercise within the area or regions designated, all police power vested in the state by the Constitution and laws of the State of California (GC, Article 12, Section 8620 and Article 13, Section 8627, “California Emergency Services Act”). During a state of emergency, mutual aid is mandatory. (Discussed later in the Plan)