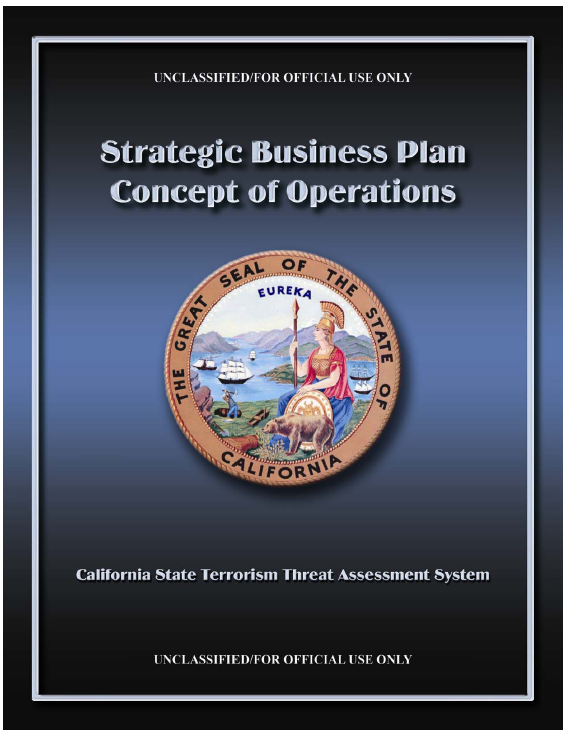 This Concept of Operations (CONOPS) provides California law enforcement and other agencies ensuring the security of our state, a primer on the State Terrorism Threat Assessment System (STTAS). This includes an overview of the California Joint Regional Information Exchange System (CAL JRIES), the state’s principal, real-time information sharing communication platform. Homeland security stakeholders will substantively influence the ongoing evolution of this CONOPS as enhancement cycles inevitably refine California’s response to terrorist and other homeland security threats.

The State Fusion Center, the four Regional Fusion Centers and the Department of Justice Intelligence Operations Center (IOC) shall annually review and, if necessary modify the CONOPS. The CONOPS is meant to be a living document that will adapt and improve based upon the needs of the STTAS participating partners and citizens of the State of California.﻿

There are many counter-terrorism and homeland security entities in California. This is not only due to the fact that California is one of the most heavily populated states. It is also due, in large part, to the fact that California is among the country’s most significant international maritime and air shipping centers, as well as a major gateway to the Pacific Rim. Because California borders Mexico, it is a major stakeholder in the undocumented immigration challenge faced by the United States, as well as the illicit importation, exportation and transportation of controlled substances and contraband across the international border. The narco-terrorist climate, just south of the California border, has resulted in an environment at our very doorstep that is not unfriendly to overt, as well as covert terrorist groups who are intent on harming the citizens of California.

At the federal level, the Federal Bureau of Investigation (FBI) and the Department of Homeland Security (DHS) have devoted very substantive resources in this state.

At the state level, the Governor=s Office of Homeland Security (OHS), the California Department of Justice (DOJ), and the California Highway Patrol (CHP) contribute personnel and resources to advance the anti-terrorism objectives of the STTAS. The California Office of Emergency Services is the lead consequence management agency for the state. At the local level, critical infrastructure facilities, private sector organizations, police departments, sheriffs’ offices, the CHP and fire departments generate critical street level information for analysis by the RTTACs. The local public safety agencies and the CHP will also assume the critical first response role in the event of a terrorist act. The local departments of fire, health, and emergency services are also heavily invested in prevention as well as consequence management.

Some counties have implemented TEWG’s to assist the RTTACs with the coordination of prevention activities as well as consequence management pre-planning. In the event of a terrorist act, TEWGs serve as a resource to their RTTAC and the Incident Command System’s unified command.

The STTAS facilitates bi-directional information sharing among federal, state, and local law enforcement, and other homeland security-dedicated public safety agencies. The system also facilitates terrorism-related information exchanges with pertinent public and private infrastructures and resources critical to the security of our state.

The State Terrorism Threat Assessment Center (STTAC), the DOJ Intelligence Operations Center (IOC), and the RTTACs together comprise the STTAS partnership. The STTAS partnership is much like an affiliation or alliance where no governing board or unified command controls the entire affiliation. The partnership’s cohesiveness and productivity is wholly dependent on the collaboration/cooperation exercised among the respective managements of the RTTACs, STTAC, and IOC.