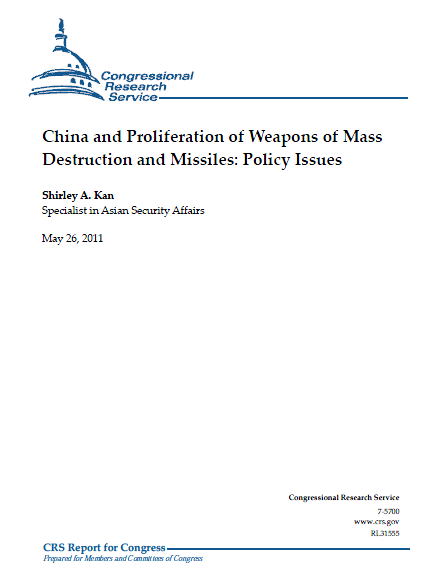 Policy approaches in seeking PRC cooperation have concerned summits, sanctions, and satellite
exports. On November 21, 2000, the Clinton Administration agreed to waive missile proliferation
sanctions, resume processing licenses to export satellites to China, and discuss an extension of the
bilateral space launch agreement, in return for another PRC promise on missile nonproliferation.
However, PRC proliferation activities have continued to raise questions about China’s
commitment to nonproliferation and the need for U.S. sanctions. The Bush Administration
imposed sanctions on 20 occasions on various PRC “entities” (including state-owned entities) for
troublesome transfers related to missiles and chemical weapons to Pakistan, Iran, or perhaps
another country, including repeated sanctions on some “serial proliferators.” Among those
sanctions, in September 2001, the Administration imposed missile proliferation sanctions that
effectively denied satellite exports, after a PRC company transferred technology to Pakistan,
despite the promise of 2000. In September 2003, the State Department imposed additional
sanctions on NORINCO, a defense industrial entity, effectively denying satellite exports to China.
However, for six times, the State Department waived this sanction for the ban on imports of other
PRC government products related to missiles, space systems, electronics, and military aircraft,
and issued a permanent waiver in 2007. Since 2009, the Obama Administration has imposed
sanctions on six occasions on multiple PRC entities for missile or other weapon proliferation.

Skeptics question whether China’s cooperation in weapons nonproliferation warrants the U.S.
pursuit of closer ties, even as sanctions were required against PRC technology transfers. Some
criticize the imposition of U.S. sanctions targeting PRC “entities” but not the government. Others
doubt the effectiveness of any stress on sanctions over diplomacy. Meanwhile, in 2002-2008, the
U.S. approach relied on China’s influence on North Korea to dismantle its nuclear weapons.
Beijing hosted the “Six-Party Talks” (last held in December 2008) with limited results. China’s
approach evolved to vote for some U.N. Security Council (UNSC) sanctions against nuclear
proliferation in North Korea and Iran. Some still called for engaging more with Beijing to use its
leverage against Pyongyang and Tehran. However, North Korea’s second nuclear test in 2009 and
military attacks against South Korea in 2010 prompted greater debate about the value of China’s
roles. After much diplomacy, the PRC voted in June 2009 for UNSC Resolution 1874 to expand
sanctions previously imposed under Resolution 1718 in 2006 against North Korea and voted in
June 2010 for UNSC Resolution 1929 for the fourth set of sanctions against Iran. Also, concerns
increased that China could capitalize in oil/gas deals in Iran as others enforce unilateral sanctions.
Relevant legislation include U.S. sanctions against Iran in CISADA (P.L. 111-195) and the
FY2011 National Defense Authorization Act (P.L. 111-383) relating to nuclear security.

Relevant questions have arisen about the PRC’s military relationship with the DPRK, including
any PLA contingency planning in the event of a crisis or collapse in North Korea and support for
the DPRK regime (even as it attacked South Korea’s naval ship and island in 2010). A related
issue has been whether the U.S. military should pursue talks on contingencies with the PLA as
well as U.S. allies. Another key question has been about the PLA’s knowledge of the DPRK’s
missile and nuclear programs, and willingness to share information with the United States and
U.S. allies. As discussed in this report, the PRC and DPRK militaries had high-level contact just
before the missile tests of August 1998 and July 2006. Moreover, this relationship has raised
questions about China’s effectiveness in using leverage with the power-holders in Pyongyang.
When asked on October 14, 2009, whether the United States and China discussed contingencies
in North Korea, Assistant Secretary of State Kurt Campbell acknowledged talks about “every”
aspect. However, in February 2010, a professor at Peking University and a close observer of PRC
policies warned that Beijing likely would not accept an implosion in Pyongyang or watch
passively if other countries gain political and military control in North Korea

China’s past and persisting connections to Pakistan’s nuclear program raised questions about
whether China was involved in or had knowledge about the long-time efforts, publicly confirmed
in early 2004, of Abdul Qadeer Khan, the former head of Pakistan’s nuclear weapon program, in
selling uranium enrichment technology to Iran, North Korea, and Libya. DCI George Tenet
confirmed A.Q. Khan’s network of nuclear trade in open testimony to the Senate Intelligence
Committee on February 24, 2004.

China’s ties to the network was a concern, particularly because China was an early recipient of
the uranium enrichment technology using centrifuges that Khan had acquired in Europe. In
return, in 1982, China gave Pakistan 15 tons of uranium hexafluoride gas for production of bombgrade uranium, 50 kilograms of weapons-grade enriched uranium enough for two bombs, and a blue-print for a nuclear weapon that China already tested, according to Khan.

A Pentagon report in 2001 said that PRC firms, in addition to North Korean and Russian entities,
contributed equipment and technology to Syria’s liquid fuel missile program. However, while
criticizing DPRK and Russian aid to Syria’s ballistic missile development, Under Secretary of
State John Bolton did not cite PRC help in a speech at the Heritage Foundation on May 6, 2002.
The “Section 721 Reports” did not specify PRC aid for Syria’s missile program, until the report
for 2010 told Congress in February 2011 that PRC entities supplied missile-related items to Syria.