The following instruction is part of a series of “limited release” DoD doctrine publications that are not released to the public. 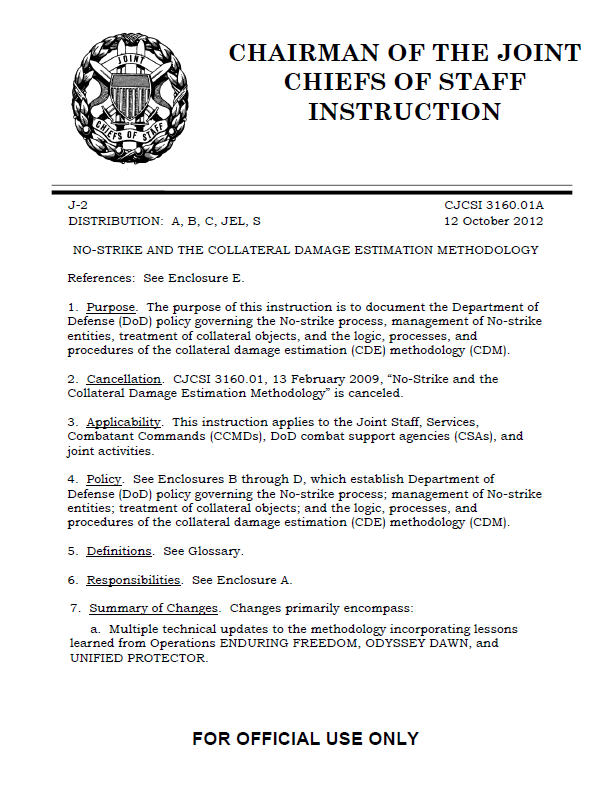 CHAIRMAN OF THE JOINT CHIEFS OF STAFF INSTRUCTION CJCSI 3160.01A: NO-STRIKE AND THE COLLATERAL DAMAGE ESTIMATION METHODOLOGY

1. Purpose. The purpose of this instruction is to document the Department of Defense (DoD) policy governing the No-strike process, management of No-strike entities, treatment of collateral objects, and the logic, processes, and procedures of the collateral damage estimation (CDE) methodology (CDM).

a. No-Strike entities (NSEs) are those designated by the appropriate authority upon which kinetic or non-kinetic operations are prohibited to avoid violating international law, conventions, or agreements, or damaging relations with coalition partners and indigenous populations. NSEs are protected from the effects of military operations (i.e., they have a “protected status”). The infliction of unnecessary suffering or damage to civilian persons or property that is excessive in relation to the concrete and direct military advantage anticipated is inconsistent with international law and is contrary to DoD policy outlined in this document and in references cand d.

b. The source and method for defining a person, place, or thing as an NSE is derived primarily from the body of international law collectively known as the Law of War (LOW) . The LOW incorporates international treaties and agreements adhered to by the U.S. Government, as well as customary international law, into a comprehensive set of guidance and requirements governing the conduct of modern warfare.

c. IAW CJCSI 3370.01, joint targeting recognizes five types of entities: facilities, individuals, virtual entities, equipment, and organizations. In this publication, the term “no-strike facility” (NSF) will be used when the facility entity type is the only entity type for which the guidance applies.

d. NSEs are categorized based on their sensitivity: CAT I (most sensitive) and CAT II (less sensitive). Because no sensitivity criteria have been established for entities other than facilities, the terms CAT I and CAT II will only be applied to NSFs.

2. No-Strike Categories. NSFs are represented by MIDB functional category codes (CATCODEs) for the purposes of intelligence production, target development, and standardized description of each functional category. Tables 1 and 2, below, show the NSFs by category type and tie specific CATCODEs to their description (number in parenthesis).

a. Category I NSFs. This category includes the most sensitive subset of NSFs addressed by the LOW, other international and domestic laws, and significant policy concerns. These objects typically constitute the core of the NSL (see Enclosure C, Appendix A).

b. Category II NSFs. This category includes the remainder of NSFs addressed by the LOW, other international and domestic laws, and significant policy concerns, and may be on the NSL.

c. No-Strike categories may be modified by the Secretary of Defense (SecDef) or President as the military or political situation dictates. Changes to these categories will be reflected in operation-specific ROE and/or via strategic/operational command guidance.

a. Collateral objects are functionally defined NSFs that have a geospatial relationship to a target and may be affected or potentially affected by target engagement. Knowledge of the location and function of collateral objects is essential to target development, the No-Strike process, and the CDM. Treat collateral objects in accordance with policy and guidance prescribed in this instruction and operational ROE.

b. Collateral objects located within the collateral hazard area (CHA) are further defined as collateral concerns.

a. Dual-use facilities are defined as those valid military targets characterized as serving both a military and civilian (i.e., noncombatant) purpose/function. In many cases, dual-use facilities are associated with senior governmental level command and control; national communications infrastructure; media centers; national power and petroleum, oil, and lubricants infrastructure; industrial facilities, and public utilities providing support to both the civilian population and the military effort.

b. Dual-use facilities may also consist of NSFs occupied by combatants. NSFs occupied by enemy combatants for the purpose of advancing military objectives lose their LOW protection and are not classified as dual-use. Similarly, if the function of an NSF is determined to be supporting military operations and/or objectives exclusively, it is not classified as dual-use. Such entities are not considered collateral damage or NSFs and may be deemed lawful targets IAW reference c (also see Enclosure C, subparagraph 2.c., and supporting footnote).

c. Commanders are responsible for determining the predominant function of an NSF, based on current intelligence, and deciding if the target has lost its LOW protected status and is a valid military target, is a dual-use facility, or is an NSF. The ROE for a specific operation provides the authorizations and/or prohibitions for targeting dual-use facilities. Regardless of the ROE in effect, civilian personnel working within the geospatially defined outline of dual-use facilities are classified as noncombatant or civilian casualties for the purpose of casualty estimation (CE) under guidance provided in Enclosure D.

a. Human shields are civilian or noncombatant personnel placed in or around a valid military target to hinder attack of that target. In some instances, human shields are willing accomplices who support the belligerent nation and in this case they lose their protected status. In other instances, the belligerent nation may either forcibly place (involuntary) or deceptively encourage (unwitting) civilians or noncombatants to be present at valid military targets, and these personnel are considered protected persons. Involuntary, unwitting, or status unknown human shields must be accounted for in CE. The presence of one or more human shields in the CE automatically elevates the target’s collateral damage estimate to CDE 5.