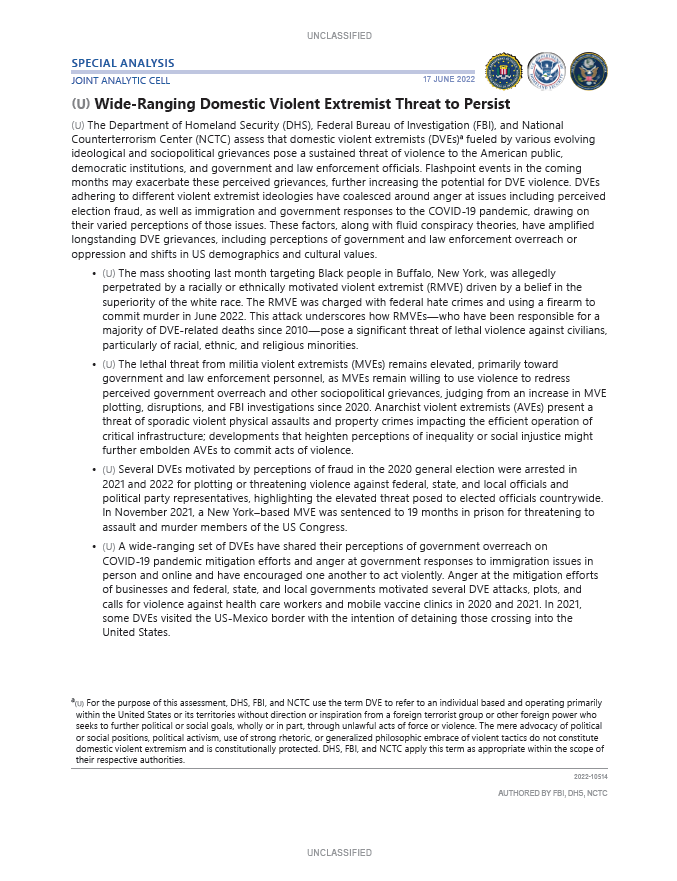 (U) The Department of Homeland Security (DHS), Federal Bureau of Investigation (FBI), and National Counterterrorism Center (NCTC) assess that domestic violent extremists (DVEs)a fueled by various evolving ideological and sociopolitical grievances pose a sustained threat of violence to the American public, democratic institutions, and government and law enforcement officials. Flashpoint events in the coming months may exacerbate these perceived grievances, further increasing the potential for DVE violence. DVEs adhering to different violent extremist ideologies have coalesced around anger at issues including perceived election fraud, as well as immigration and government responses to the COVID-19 pandemic, drawing on their varied perceptions of those issues. These factors, along with fluid conspiracy theories, have amplified longstanding DVE grievances, including perceptions of government and law enforcement overreach or oppression and shifts in US demographics and cultural values.

• (U) The mass shooting last month targeting Black people in Buffalo, New York, was allegedly perpetrated by a racially or ethnically motivated violent extremist (RMVE) driven by a belief in the superiority of the white race. The RMVE was charged with federal hate crimes and using a firearm to commit murder in June 2022. This attack underscores how RMVEs—who have been responsible for a majority of DVE-related deaths since 2010—pose a significant threat of lethal violence against civilians, particularly of racial, ethnic, and religious minorities.

• (U) The lethal threat from militia violent extremists (MVEs) remains elevated, primarily toward government and law enforcement personnel, as MVEs remain willing to use violence to redress perceived government overreach and other sociopolitical grievances, judging from an increase in MVE plotting, disruptions, and FBI investigations since 2020. Anarchist violent extremists (AVEs) present a threat of sporadic violent physical assaults and property crimes impacting the efficient operation of critical infrastructure; developments that heighten perceptions of inequality or social injustice might further embolden AVEs to commit acts of violence.

• (U) Several DVEs motivated by perceptions of fraud in the 2020 general election were arrested in 2021 and 2022 for plotting or threatening violence against federal, state, and local officials and political party representatives, highlighting the elevated threat posed to elected officials countrywide. In November 2021, a New York–based MVE was sentenced to 19 months in prison for threatening to assault and murder members of the US Congress.

• (U) A wide-ranging set of DVEs have shared their perceptions of government overreach on COVID-19 pandemic mitigation efforts and anger at government responses to immigration issues in person and online and have encouraged one another to act violently. Anger at the mitigation efforts of businesses and federal, state, and local governments motivated several DVE attacks, plots, and calls for violence against health care workers and mobile vaccine clinics in 2020 and 2021. In 2021, some DVEs visited the US-Mexico border with the intention of detaining those crossing into the United States.

(U) Developments related to midterm elections, immigration, perceptions of government overreach or social injustice, and other flashpoint events will probably motivate some DVEs across ideologies to plot or attempt violence in the coming months. In the context of these events, some DVEs might promote or exploit the public prevalence of violent extremist narratives to encourage violence. DVE attackers and plotters are typically lone actors—individuals acting without the direct support of others—who plot or conduct attacks on soft targets using easily accessible weapons. The persistent difficulty of detecting threats from such actors underscores the value of the public’s assistance in identifying people who might be mobilizing to violence and in reporting concerning behavior to authorities before violence occurs.

(U) We assess that RMVEs who are driven by a belief in the superiority of the white race continue to pose the primary threat among DVEs of committing lethal violence against civilians, based on their ideology and attack history. These RMVEs advocate and commit violence in support of a transnational movement whose adherents believe that white people of European descent are superior to and threatened by minority populations, as well as by other whites whom they perceive as supporting these populations. Some of these RMVEs promote accelerationist thinking, which advocates committing violence to precipitate a large-scale conflict, often framed as a “race war,” in the United States and other Western democracies that these RMVEs believe will result in a white ethnostate.

(U) The lethal threat level from MVEs to law enforcement and government personnel will almost certainly remain elevated in the coming months because some of these actors are willing to use violence to redress perceived government overreach and other sociopolitical issues. Some MVEs will almost certainly continue to harbor grievances over their perceptions of fraud during the 2020 election and government measures related to the COVID-19 pandemic. Some MVEs might also mobilize to violence in response to the enactment of any legislation that they perceive as restricting access to firearms, expanding immigration, or managing public land that MVEs might view as unacceptable infringements on civil liberties or harmful to the security of the United States.