The following bulletin was obtained from the public website of a U.S. trade group. 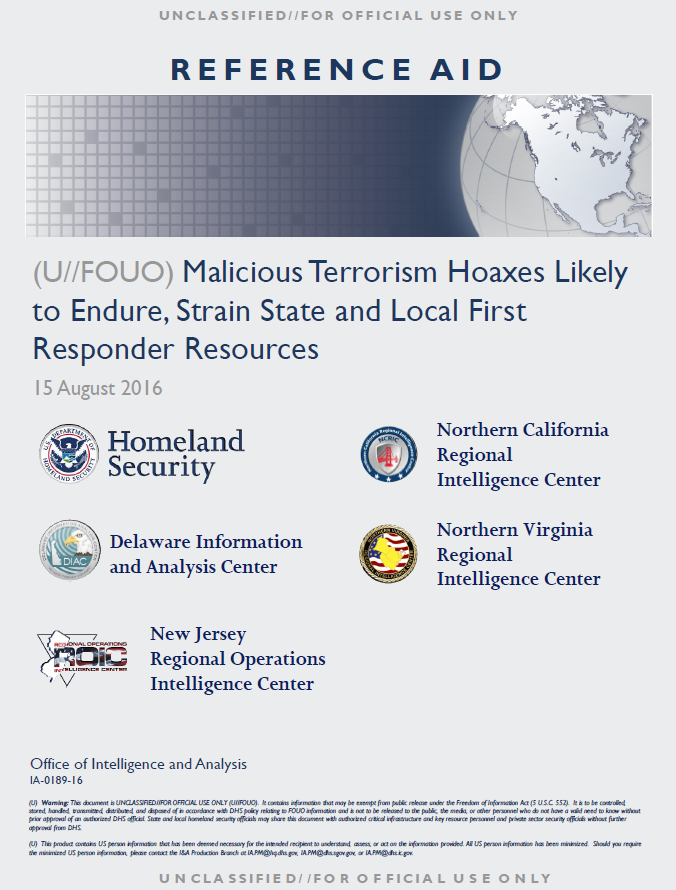 (U//FOUO) This Reference Aid is intended to provide information on malicious terrorism hoaxes that will continue to challenge first responder resources throughout the Homeland and territories. This Reference Aid is provided by I&A, DIAC, NCRIC, NVRIC, and NJ-ROIC to support their respective activities, to provide situational awareness, and to assist federal, state, local, tribal, and territorial government counterterrorism and law enforcement officials and first responders with recognizing the indicators and implications of malicious terrorism hoaxes. The use of hoax calls may also be used as a technique to lure authorities to a particular location for the purpose of conducting a potential attack, but is not discussed in this article, as luring is viewed as its own distinct tactic.

(U//FOUO) Based on our analysis of open sources and DHS-supported fusion center reporting, we assess malicious terrorism hoaxes such as bogus e-mails and phoned-in threats, including swatting and automated robocalls, will continue to challenge first responder resources throughout the country and territories, as they create disturbances and send false alarms. According to numerous police departments, these hoaxes—claiming active shooter, fire, and bomb threats—divert valuable resources or close down locations; most are motivated by a desire to cause disruption or annoyance rather than physical harm, and do not represent an actual terrorist threat. We judge hoax threats will continue to strain state and local government first responder resources over the next few years based on the number of threats made in the United States over the past two years.

(U//FOUO) Swatting uses the 911 system to report false incidents at a location (e.g., fires, shootings) and results in the dispatching of emergency services. Swatting poses a potential significant threat to public safety by diverting first responder resources needed to handle real emergencies occurring during the incident response time. Although most swatting incidents are criminal in nature, we assess the diversion of resources by a foreign terrorist organization (FTO) during a real attack would amplify the effectiveness of their attack against a different location. These calls could also result in accidental deaths by inadvertently placing unsuspecting victims targeted by the call in a confrontational situation with law enforcement tactical response.

» (U) In July 2016, a New York man was sentenced to two years in prison for swatting public officials. In March 2013, he used the same tactic and disrupted the University of Arizona, claiming there was an active shooter with explosives on campus, according to reliable media reports and a Department of Justice press release.

» (U) In November 2014, law enforcement responded to a hoax 911 call in Elizabeth, New Jersey. The caller pledged allegiance to the self-proclaimed Islamic State of Iraq and the Levant (ISIL), alleging he had bombs, an AK-47, and had taken hostages at a local hotel, according to a media report. There is no indication this incident was actually associated with ISIL.

(U//FOUO) Robocalls use a computer-generated phone call made directly to a target or a group of targets rather than via the 911 system, often using a voice anonymizer to deliver a recorded bomb threat via telephone. Robocalls and e-mailed bomb threats are usually nonviolent hoaxes intended to force an evacuation of the threatened location, typically a school or a courthouse.

» (U) In May 2016, anonymous phone threats disrupted the school day in 21 states, with some states reporting multiple schools had evacuated or initiated lockdowns in response to threats warning of an explosive device on school grounds. Schools across the United Kingdom received similar threats, disrupting final exams, according to media reports.

» (U//FOUO) From January through February 2016, a similar wave of robocalls impacted numerous states and territories across the United Sates, according to information from several DHS-supported fusion centers as well as open source reporting. These threats involved prerecorded or robotic-style bomb threats targeting schools, courthouses, police stations, fire stations, and small businesses, many resulting in evacuations, closures, and responses from explosive ordinance disposal units.

» (U) In December 2015, a malicious terrorism hoax e-mailed to the Los Angeles Unified School District claimed every school in the system would be targeted by 32 terrorist operatives armed with various weapons, including nerve gas, according to press reporting. Similar threats were sent to other school districts in California, Florida, New Jersey, New York City, Texas, and Washington, DC.