The following bulletin is a substantial revision of a bulletin released on June 1, 2020.  That version is also available.  Both versions were obtained from the website of a national trade group. 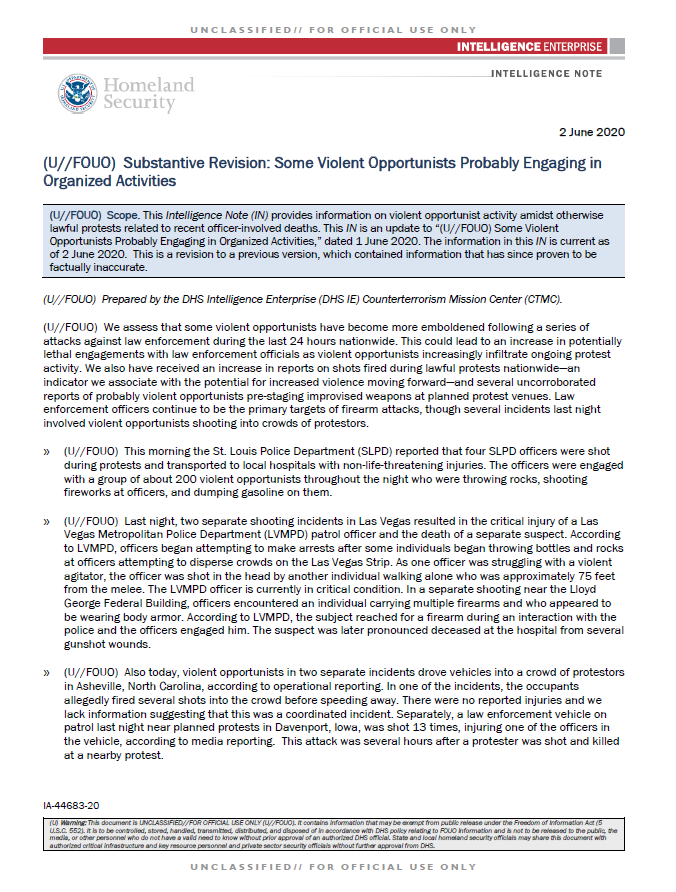 » (U//FOUO) This morning the St. Louis Police Department (SLPD) reported that four SLPD officers were shot during protests and transported to local hospitals with non-life-threatening injuries. The officers were engaged with a group of about 200 violent opportunists throughout the night who were throwing rocks, shooting fireworks at officers, and dumping gasoline on them.

» (U//FOUO) Last night, two separate shooting incidents in Las Vegas resulted in the critical injury of a Las Vegas Metropolitan Police Department (LVMPD) patrol officer and the death of a separate suspect. According to LVMPD, officers began attempting to make arrests after some individuals began throwing bottles and rocks at officers attempting to disperse crowds on the Las Vegas Strip. As one officer was struggling with a violent agitator, the officer was shot in the head by another individual walking alone who was approximately 75 feet from the melee. The LVMPD officer is currently in critical condition. In a separate shooting near the Lloyd George Federal Building, officers encountered an individual carrying multiple firearms and who appeared to be wearing body armor. According to LVMPD, the subject reached for a firearm during an interaction with the police and the officers engaged him. The suspect was later pronounced deceased at the hospital from several gunshot wounds.

» (U//FOUO) Also today, violent opportunists in two separate incidents drove vehicles into a crowd of protestors in Asheville, North Carolina, according to operational reporting. In one of the incidents, the occupants allegedly fired several shots into the crowd before speeding away. There were no reported injuries and we lack information suggesting that this was a coordinated incident. Separately, a law enforcement vehicle on patrol last night near planned protests in Davenport, Iowa, was shot 13 times, injuring one of the officers in the vehicle, according to media reporting. This attack was several hours after a protester was shot and killed at a nearby protest.

» (U//FOUO) We have several uncorroborated reports of bricks being pre-staged at planned protest venues nationwide, according to media reporting. Although we have been unable to verify the reporting through official channels, the staging of improvised weapons at planned events is a common tactic used by violent opportunists, and an increase in reports of staging of these materials at separate locations could be indicative that local coordination to infiltrate protests is increasing. We lack reporting indicating individuals are coordinating violence across multiple jurisdictions.

(U//FOUO) The following list of indicators may be indicative of violent opportunist efforts to plan and coordinate activities in support of attacks targeting law enforcement or the destruction of critical infrastructure. Some of the observed suspicious behaviors include constitutionally protected activities and should not be reported absent articulable facts and circumstances that supports a reasonable belief the observed behavior is itself, or when taken in context of other activities, is indicative of violent activities.