The following bulletin was substantially revised on June 2, 2020.  That version is also available.  Both versions were obtained from the website of a national trade group. 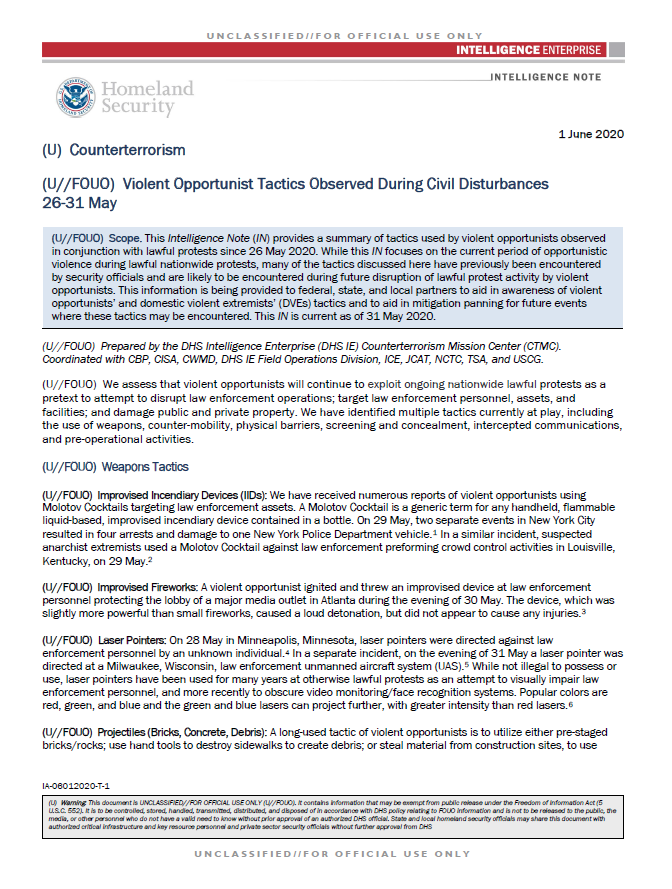 (U//FOUO) We assess that violent opportunists will continue to exploit ongoing nationwide lawful protests as a pretext to attempt to disrupt law enforcement operations; target law enforcement personnel, assets, and facilities; and damage public and private property. We have identified multiple tactics currently at play, including the use of weapons, counter-mobility, physical barriers, screening and concealment, intercepted communications, and pre-operational activities.

(U//FOUO) Improvised Fireworks: A violent opportunist ignited and threw an improvised device at law enforcement personnel protecting the lobby of a major media outlet in Atlanta during the evening of 30 May. The device, which was slightly more powerful than small fireworks, caused a loud detonation, but did not appear to cause any injuries.

(U//FOUO) Laser Pointers: On 28 May in Minneapolis, Minnesota, laser pointers were directed against law enforcement personnel by an unknown individual. In a separate incident, on the evening of 31 May a laser pointer was directed at a Milwaukee, Wisconsin, law enforcement unmanned aircraft system (UAS). While not illegal to possess or use, laser pointers have been used for many years at otherwise lawful protests as an attempt to visually impair law enforcement personnel, and more recently to obscure video monitoring/face recognition systems. Popular colors are red, green, and blue and the green and blue lasers can project further, with greater intensity than red lasers.

(U//FOUO) Projectiles (Bricks, Concrete, Debris): A long-used tactic of violent opportunists is to utilize either pre-staged bricks/rocks; use hand tools to destroy sidewalks to create debris; or steal material from construction sites, to use these materials against law enforcement or for breaching windows, typically of retail outlets and banks. On 31 May, traditional media reported that Minnesota law enforcement discovered hidden caches of flammable materials, rocks, and other projectiles. In addition to the potential for injury, use of these items by violent opportunists may be a means to provoke law enforcement to take aggressive action against the preparator(s), which would likely be captured on video and shared on social media.

(U//FOUO) Concealed Weapons/Hand tools: Violent opportunists may bring small hand tools—such as hammers, picks, or tire irons—concealed in backpacks to lawful protests to engage in violence or conduct other criminal activity. These objects can be multi-functional including use as: handheld weapons, breaching tools to break windows or pry open doors of vehicles and structures; or, as mentioned above, tools to acquire sources of projected items. On 31 May, protesters in Washington, DC, stopped a violent opportunist who was damaging a sidewalk using hand tools, and handed the individual over to nearby Washington Metro Police Department officers. The production of debris in such a manner has been highlighted in anarchist extremists texts as a means to produce objects which could be thrown at law enforcement and used to damage various targets of opportunity such as emergency service vehicles, retail and banking facilities, or government facilities.

(U//FOUO) Improvised Obstacles: Violent opportunists may use items found in urban areas—such as trash cans, wheeled dumpsters, road signs, newspaper stands, and looted debris—to form a defensive perimeter or to block or attempt to delay access by law enforcement to a specific area. Generally, we have not seen widespread use of this tactic during the current period of violence during lawful protests. New York City noted that violent opportunists used barricades for crowd control, as well as burning wheeled dumpsters to create barriers between them and police. Violent opportunists have been observed using burning wheeled dumpsters as an attempt to breach law enforcement lines in Washington, DC, on the evening of 30 May.

(U//FOUO) Screening: Violent opportunists in Los Angeles on 30 May were observed using screened fences which had been stolen from a nearby construction site to form a screening barrier against an approaching line of law enforcement. On 29 May violent opportunists in Louisville, Kentucky, used a large banner to screen their movements from law enforcement.12 These screens serve two functions: 1) To conceal movement of specific personnel from law enforcement on the ground, and 2) to act as a barrier against rubber bullets; paint rounds; and other less-than-lethal riot control weapons. Variations of this tactic could include using plywood, banners, or umbrellas. An individual with an umbrella was observed on the front line of a group of violent opportunists during activity at a major news outlet in Atlanta on 30 May, likely intended to restrict visibility of law enforcement personnel and to deflect low velocity riot control devices.

(U//FOUO) Pre-Operational Activities: In the days before a planned protest, violent opportunists may conduct reconnaissance of the planned route and assembly area. This is mainly to identify sources for weapons or improvised barriers, such as construction sites, retail outlets, pre-staged crowd barriers, or road construction barriers; stockpile improvised weapons caches; and establish rally points or escape routes. On 29 May, suspected anarchist extremists in Louisville, Kentucky, cached weapons and supplies throughout the city prior to engaging in violent acts. Items included baseball bats, water, milk (likely as a means to counteract the effects of tear gas), and other medical supplies.