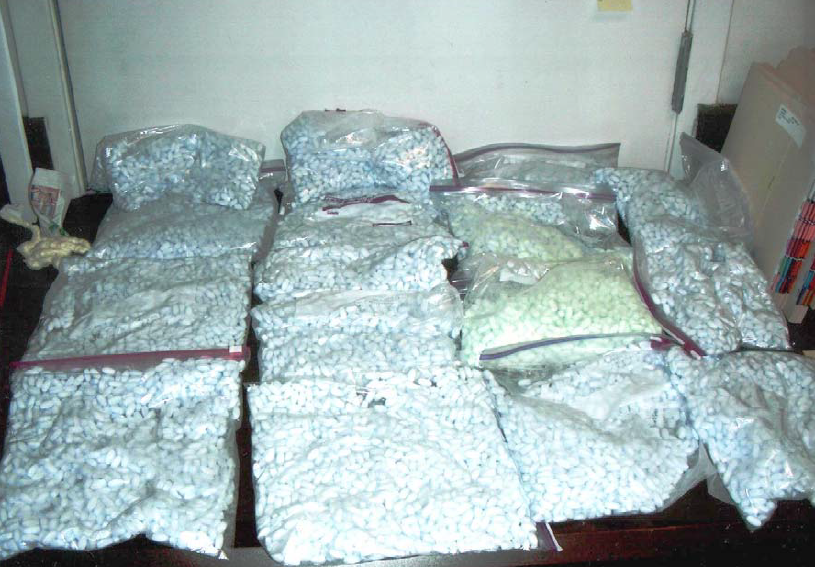 A collection of prescription pills seized by authorities from the cover of the 2010 "Overview of Pharmaceutical Abuse & Diversion: A Growing Threat to the Houston HIDTA."

A 2010 assessment of pharmaceutical abuse released by the hacktivist collective known as Anonymous provides significant detail about the extent and human toll of prescription medication and “doctor shopping” in Houston and southeast Texas.  The bulletin was reported on by major media sources, including the Houston Chronicle, but the report was never released publicly.

As far back as 2007, southeast Texas has been referred to as a “mecca” for prescription drug abuse.  In October 2007, the Houston Chronicle reported that the amount of Xanax seized by Houston Police had more than quadrupled from the previous year.  That same year, narcotics investigators with the Houston Police Department seized 215,946 grams of hydrocodone, an increase of more than 2000% from the 9,030 grams seized in all of 2005.  By 2010, the Houston Chronicle estimated that since 2006 more than 1,300 people had died in Harris County due to the abuse of prescription medication.

The document from the Houston Regional Intelligence Support Center that was released by Anonymous provides a great deal of detail regarding the extent of the problem.  The report, “Overview of Pharmaceutical Abuse & Diversion: A Growing Threat to the Houston HIDTA” written in July 2010, provides an overview of pharmaceutical abuse throughout a section of southeast Texas that is officially part of the Houston High Intensity Drug Trafficking Area (HITDA).  The report says that in Harris County alone, “from 2006 through 2008 pharmaceuticals were present in over 66% of the 1533 cases of toxicity-related deaths” and that in subsequent years this has only increased.  In fact, a so-called “Pharmaceutical Cocktail” which contains the medications hydrocodone, alprazolam and carisoprodol is the “single leading cause of toxicity-related deaths in Harris County”.

If you live in Texas, this may sound familiar, as the Houston Chronicle wrote an entire article about the report when it was first issued to law enforcement in July 2010.  However, the document was never released in full.  Now, thanks to the efforts of Anonymous, the full document has been publicly released and its detailed contents can inform not only the public, who has a right to the information, but the other members of the larger law enforcement community who may face similar dangers in their own communities.