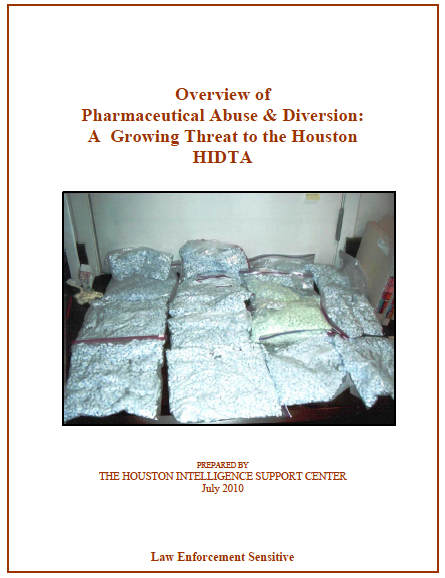 Overview of Pharmaceutical Abuse & Diversion: A Growing Threat to the Houston HIDTA

The threat of pharmaceutical drug abuse and diversion in the Houston HIDTA has been dangerously high and increasing for the past several years. Drug investigators report that it is becoming more widespread, addicting abusers from middle school to middle age. Perhaps the most concerning threat related to pharmaceutical abuse is the alarmingly high potential for overdose or accidental death from controlled prescription drugs. In Harris County alone, from 2006 through 2008 pharmaceuticals were present in over 66% of the 1533 cases of toxicity-related deaths. In 2009, over 78% involved pharmaceuticals.

Not only is diversion a deadly problem, it is incredibly profitable. Pain management clinic owners gross an average of $4,000-$5,000 per day at each location. A successful owner running multiple clinics can easily make $75,000 a week from only three operations, getting paid entirely in cash.

Diversion of pharmaceutical drugs continues to be a present and growing threat in the Houston HIDTA.

Pharmaceutical drugs are prevalent and lethal.

Law enforcement is hindered by a lack of laws criminalizing diversion.

The level of pharmaceutical abuse in the Houston HIDTA is unknown.

If legislation passes in the State of Texas, new methods of enforcement against diversion and abuse of pharmaceuticals will become available. How law enforcement and criminals will adapt to these changes remains unknown.