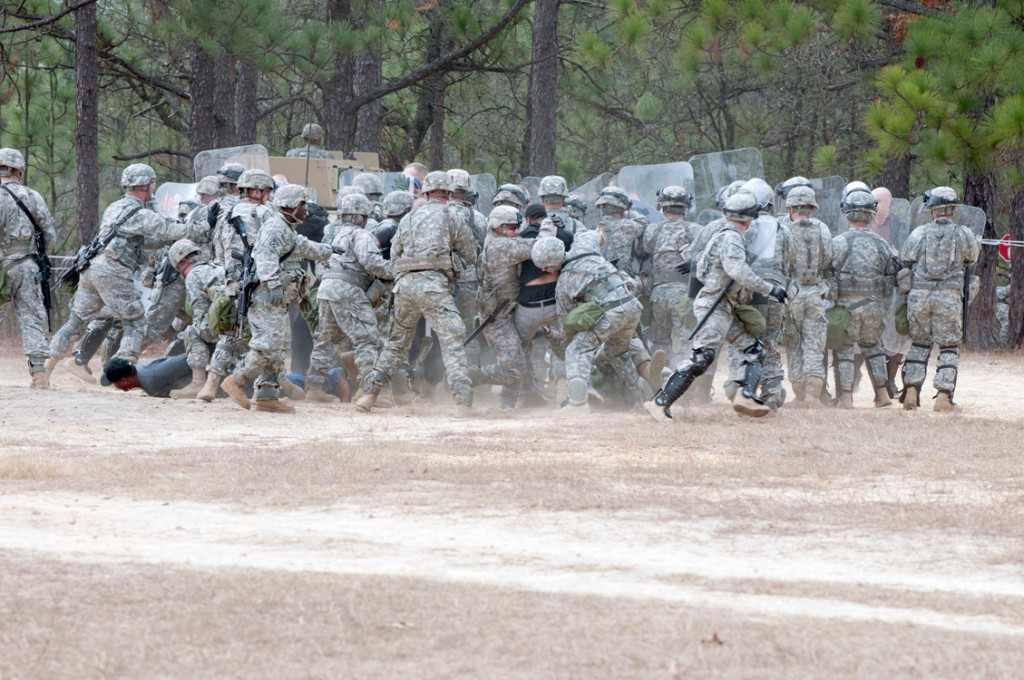 Soldiers from the 3rd Battalion, 321st Field Artillery Regiment, XVIII Fires Brigade train last December to “respond to an escalating civil-disturbance situation caused by unhappy simulated hurricane victims.”  According to an article produced by the 82nd Combat Aviation Brigade, the training was designed to prepare the soldiers “for their upcoming assignment as a quick reaction and rapid response force for U.S. Army North Command in support of emergencies in the United States.”

The Department of Defense has issued an instruction clarifying the rules for the involvement of military forces in civilian law enforcement.  The instruction establishes “DoD policy, assigns responsibilities, and provides procedures for DoD support to Federal, State, tribal, and local civilian law enforcement agencies, including responses to civil disturbances within the United States.”

In addition to defining responsibilities for military coordination with local law enforcement, the instruction describes circumstances in which direct participation in civilian law enforcement is permissible.  Under the Posse Comitatus Act of 1878, U.S military personnel are generally prohibited from assisting in civilian law enforcement functions such as search and seizure, interdiction of vehicles, arrest and interrogation, surveillance or using force except for in self-defense. Though the Posse Comitatus Act originally referred only to the Army, it was extended in 1956 to include the Air Force. Subsequent DoD regulations prevent the use of the Marine Corps or Navy for civilian law enforcement functions.  In 1981, this principle was further codified in 10 USC § 375 which directs the Secretary of Defense to ensure that military activities do “not include or permit direct participation by a member of the Army, Navy, Air Force, or Marine Corps in a search, seizure, arrest, or other similar activity unless participation in such activity by such member is otherwise authorized by law.”

Though the Posse Comitatus Act is the primary restriction on direct DoD involvement in law enforcement functions, it does not prevent military personnel from participating in circumstances “authorized by the Constitution or Act of Congress.”  This includes circumstances involving “insurrection, domestic violence, or conspiracy that hinders the execution of State or Federal law” as well as actions “taken under express statutory authority.”  The DoD’s instruction includes a list of more than a dozen “laws that permit direct DoD participation in civilian law enforcement” including many obscure statutes that are more than a hundred years old.  For example, a law passed in 1882 and codified under 16 USC § 593 allows for the President to use land and naval forces to “prevent the felling, cutting down, or other destruction of the timber of the United States in Florida.”  Likewise, the Guano Islands Act of 1856 enables the President to use land and naval forces to protect the rights of a discoverer of an island covered by the Act.

Military commanders also have “emergency authority” to use military forces in civilian law enforcement functions “in extraordinary emergency circumstances where prior authorization by the President is impossible and duly constituted local authorities are unable to control the situation, to engage temporarily in activities that are necessary to quell large-scale, unexpected civil disturbances”.  This authority is limited to actions “necessary to prevent significant loss of life or wanton destruction of property and are necessary to restore governmental function and public order” and “provide adequate protection for Federal property or Federal governmental functions.”  In fact, an enclosure to the DoD instruction describing requirements for support of civil disturbance operations states that military commanders “shall not take charge of any function of civil government unless absolutely necessary under conditions of extreme emergency.”  According to the instruction, any “commander who is directed, or undertakes, to control such functions shall strictly limit DoD actions to emergency needs and shall facilitate the reestablishment of civil responsibility at the earliest time possible.”