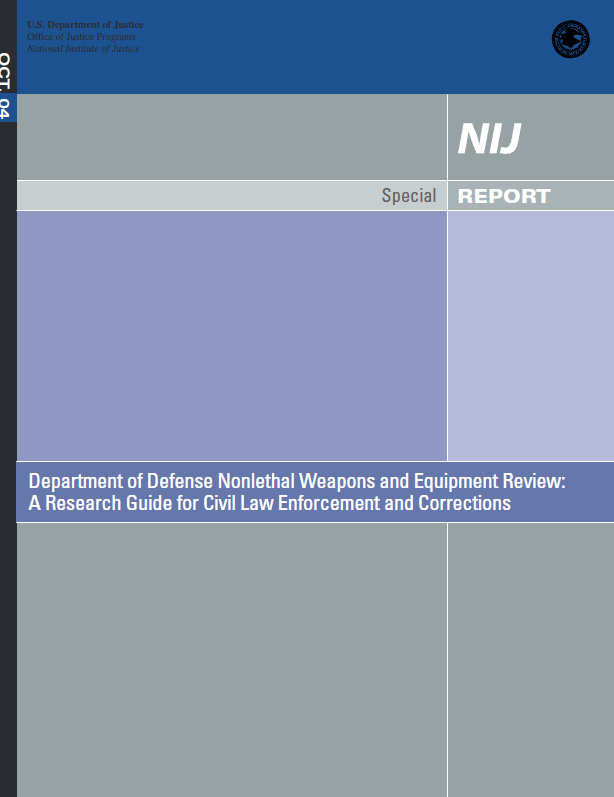 Under its Less-Lethal Technologies Program, established in 1986, the National Institute of Justice (NIJ)—the research, development, and evaluation arm of the U.S. Department of Justice—provides funds to identify, develop, and evaluate new or improved devices and other technology that will minimize the risk of death and injury to law enforcement officers, suspects, prisoners, and the general public. Many Federal, State, and local civil law enforcement and corrections agencies use less-lethal weapons and equipment to help minimize the loss of life and property. These devices are used to quell prison riots, suppress mobs, and subdue hostile individuals. NIJ has prepared this equipment review to inform Federal, State, and local agencies about the Department of Defense (DoD) Joint Nonlethal Weapons Program and the less-lethal weapons and equipment used by civil law enforcement agencies. This review does not address issues surrounding DoD’s Joint Nonlethal Weapons Program or issues related to nonlethal weapons research and development programs.

The equipment selection process is discussed in appendix A. The appendix also includes descriptions of DoD’s Joint Nonlethal Weapons Program; nonlethal weapons programs in the military branches (Army, Marine Corps, Navy, and Air Force), the DoD Special Operations Command, and U.S. Coast Guard; and civil law enforcement less-lethal weapons. A glossary is presented in appendix B. Typically, DoD uses the term “nonlethal” and NIJ and civil law enforcement agencies use the term “less-lethal” when referring to the same technology.

Law enforcement officers of the 21st century encounter many of the same challenges and issues their predecessors faced during the late 20th century. Incidents involving hostage rescue, vehicle pursuit, attempted suicide, the need to detain or control unruly individuals and crowds, and domestic disturbances continue to dominate daily activities. However, technology advances have matured, and new tactics provide law enforcement officers with additional options for handling many of these situations. A difficult aspect of civil law enforcement continues to be the need to manage individuals or groups when more than a show of force or voice commands are required and deadly force is neither authorized nor the preferred method of resolution. To meet this need, many Federal and State agencies and local law enforcement departments have developed and used less-lethal technology.

In the context of civil law enforcement, less-lethal weapons are those primarily designed to temporarily disable or stop suspects without killing, thereby providing an alternative to lethal force where appropriate. These weapons are “less lethal” in a literal sense because none can be guaranteed to avoid serious injury or death. As in the military, law enforcement officers should never consider less-lethal weapons to be a replacement for the legal use of lethal force; rather, they should use less-lethal weapons as an instrument of force in the continuum between show of force or verbal commands and deadly force. 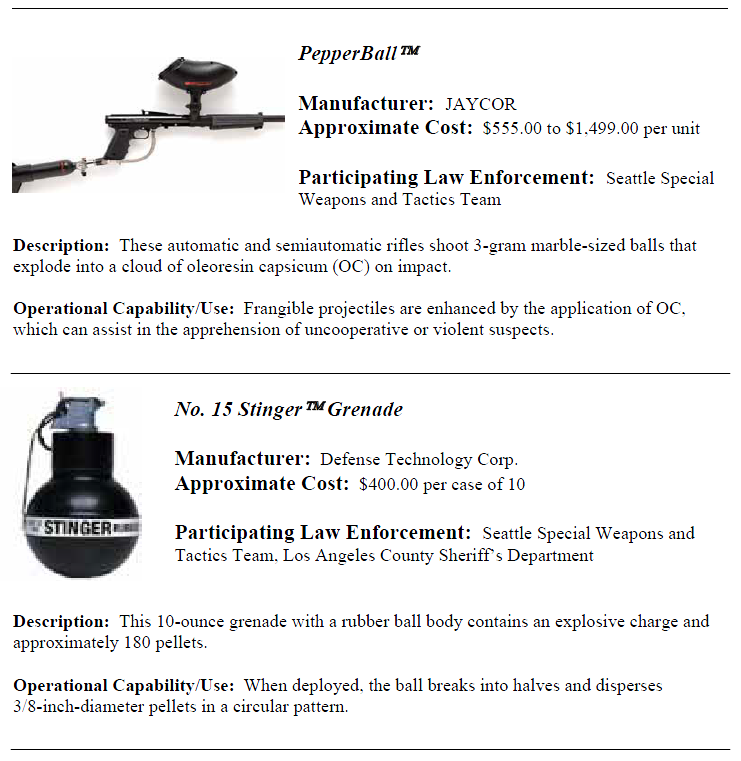