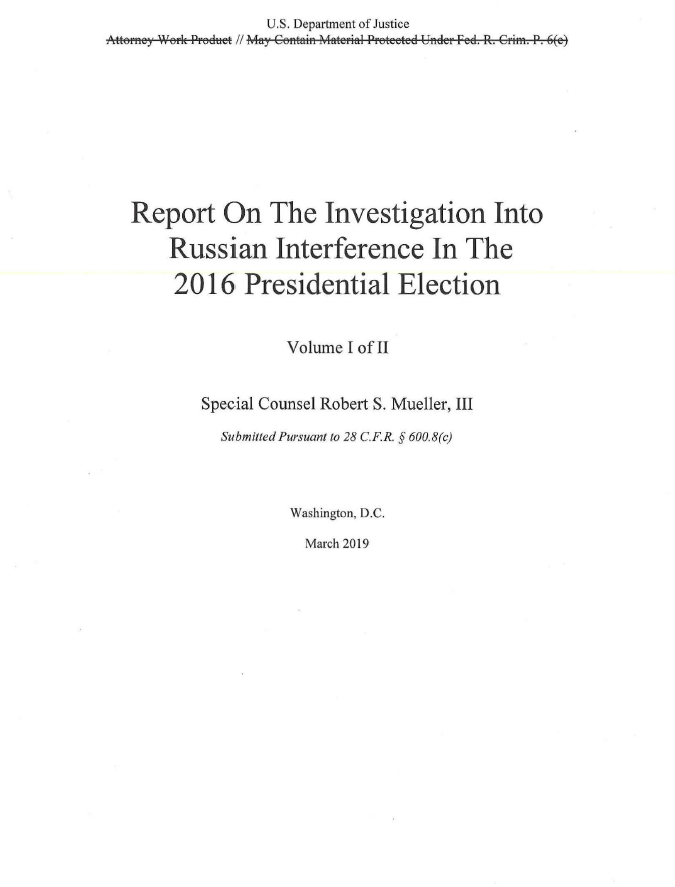 EXECUTIVE SUMMARY TO VOLUME I

The Internet Research Agency (IRA) carried out the earliest Russian interference operations identified by the investigation-a social media campaign designed to provoke and amplify political and social discord in the United States. The IRA was based in St. Petersburg, Russia, and received funding from Russian oligarch Yevgeniy Prigozhin and companies he controlled.

The IRA later used social media accounts and interest groups to sow discord in the U.S. political system through what it termed “information warfare.” The campaign evolved from a generalized program designed in 2014 and 2015 to undermine the U.S. electoral system, to a targeted operation that by early 2016 favored candidate Trump and disparaged candidate Clinton. The IRA’s operation also included the purchase of political advertisements on social media in the names of U.S. persons and entities, as well as the staging of political rallies inside the United States. To organize those rallies, IRA employees posed as U.S. grassroots entities and persons and made contact with Trump supporters and Trump Campaign officials in the United States. The investigation did not identify evidence that any U.S. persons conspired or coordinated with the IRA. Section II of this report details the Office’s investigation of the Russian social media campaign.

At the same time that the IRA operation began to focus on supporting candidate Trump in early 2016, the Russian government employed a second form of interference: cyber intrusions (hacking) and releases of hacked materials damaging to the Clinton Campaign. The Russian intelligence service known as the Main Intelligence Directorate of the General Staff of the Russian Army (GRU) carried out these operations.

In March 2016, the GRU began hacking the email accounts of Clinton Campaign volunteers and employees, including campaign chairman John Podesta. In April 2016, the GRU hacked into the computer networks of the Democratic Congressional Campaign Committee (DCCC) and the Democratic National Committee (DNC). The GRU stole hundreds of thousands of documents from the compromised email accounts and networks. Around the time that the DNC announced in mid-June 2016 the Russian government’s role in hacking its network, the GRU began disseminating stolen materials through the fictitious online personas “DCLeaks” and “Guccifer 2.0.” The GRU later released additional materials through the organization WikiLeaks.

RUSSIAN CONTACTS WITH THE CAMPAIGN

The social media campaign and the GRU hacking operations coincided with a series of contacts between Trump Campaign officials and individuals with ties to the Russian government. The Office investigated whether those contacts reflected or resulted in the Campaign conspiring or coordinating with Russia in its election-interference activities. Although the investigation established that the Russian government perceived it would benefit from a Trump presidency and worked to secure that outcome, and that the Campaign expected it would benefit electorally from information stolen and released through Russian efforts, the investigation did not establish that members of the Trump Campaign conspired or coordinated with the Russian government in its election interference activities.

The Russian contacts consisted of business connections, offers of assistance to the Campaign, invitations for candidate Trump and Putin to meet in person, invitations for Campaign officials and representatives of the Russian government to meet, and policy positions seeking improved U.S.-Russian relations. Section IV of this Report details the contacts between Russia and the Trump Campaign during the campaign and transition periods, the most salient of which are summarized below in chronological order.

The Office investigated several other events that have been publicly reported to involve potential Russia-related contacts. For example, the investigation established that interactions between Russian Ambassador Kislyak and Trump Campaign officials both at the candidate’s April 2016 foreign policy speech in Washington, D.C., and during the week of the Republican National Convention were brief, public, and non-substantive. And the investigation did not establish that one Campaign official’s efforts to dilute a portion of the Republican Party platform on providing assistance to Ukraine were undertaken at the behest of candidate Trump or Russia. The investigation also did not establish that a meeting between Kislyak and Sessions in September 2016 at Sessions’s Senate office included any more than a passing mention of the presidential campaign.

The investigation did not always yield admissible information or testimony, or a complete picture of the activities undertaken by subjects of the investigation. Some individuals invoked their Fifth Amendment right against compelled self-incrimination and were not, in the Office’s judgment, appropriate candidates for grants of immunity. The Office limited its pursuit of other witnesses and information-such as information known to attorneys or individuals claiming to be members of the media-in light of internal Department of Justice policies. See, e.g. , Justice Manual§§ 9-13.400, 13.410. Some of the information obtained via court process, moreover, was presumptively covered by legal privilege and was screened from investigators by a filter (or “taint”) team. Even when individuals testified or agreed to be interviewed, they sometimes provided information that was false or incomplete, leading to some of the false-statements charges described above. And the Office faced practical limits on its ability to access relevant evidence as well-numerous witnesses and subjects lived abroad, and documents were held outside the United States.

Further, the Office learned that some of the individuals we interviewed or whose conduct we investigated-including some associated with the Trump Campaign–deleted relevant communications or communicated during the relevant period using applications that feature encryption or that do not provide for long-term retention of data or communications records. In such cases, the Office was not able to corroborate witness statements through comparison to contemporaneous communications or fully question witnesses about statements that appeared inconsistent with other known facts.

Our obstruction-of-justice inquiry focused on a series of actions by the President that related to the Russian-interference investigations, including the President’s conduct towards the law enforcement officials overseeing the investigations and the witnesses to relevant events.

Conduct involving FBI Director Comey and Michael Flynn. In mid-January 2017, incoming National Security Advisor Michael Flynn falsely denied to the Vice President, other administration officials, and FBI agents that he had talked to Russian Ambassador Sergey Kislyak about Russia’s response to U.S. sanctions on Russia for its election interference. On January 27, the day after the President was told that Flynn had lied to the Vice President and had made similar statements to the FBI, the President invited FBI Director Corney to a private dinner at the White House and told Corney that he needed loyalty. On February 14, the day after the President requested Flynn’s resignation, the President told an outside advisor, “Now that we fired Flynn, the Russia thing is over.” The advisor disagreed and said the investigations would continue.

Later that afternoon, the President cleared the Oval Office to have a one-on-one meeting with Corney. Referring to the FBI’s investigation of Flynn, the President said, “I hope you can see your way clear to letting this go, to letting Flynn go. He is a good guy. I hope you can let this go.” Shortly after requesting Flynn’s resignation and speaking privately to Corney, the President sought to have Deputy National Security Advisor K.T. McFarland draft an internal letter stating that the President had not directed Flynn to discuss sanctions with Kislyak. McFarland declined because she did not know whether that was true, and a White House Counsel’s Office attorney thought that the request would look like a quid pro quo for an ambassadorship she had been offered.

The President’s reaction to the continuing Russia investigation. In February 2017, Attorney General Jeff Sessions began to assess whether he had to recuse himself from campaign-related investigations because of his role in the Trump Campaign. In early March, the President told White House Counsel Donald McGahn to stop Sessions from recusing. And after Sessions announced his recusal on March 2, the President expressed anger at the decision and told advisors that he should have an Attorney General who would protect him. That weekend, the President took Sessions aside at an event and urged him to “unrecuse.” Later in March, Corney publicly disclosed at a congressional hearing that the FBI was investigating “the Russian government’s efforts to interfere in the 2016 presidential election,” including any links or coordination between the Russian government and the Trump Campaign. In the following days, the President reached out to the Director of National Intelligence and the leaders of the Central Intelligence Agency (CIA) and the National Security Agency (NSA) to ask them what they could do to publicly dispel the suggestion that the President had any connection to the Russian election-interference effort. The President also twice called Corney directly, notwithstanding guidance from McGahn to avoid direct contacts with the Department of Justice. Corney had previously assured the President that the FBI was not investigating him personally, and the President asked Corney to “lift the cloud” of the Russia investigation by saying that publicly.

The President’s termination of Corney. On May 3, 2017, Corney testified in a congressional hearing, but declined to answer questions about whether the President was personally under investigation. Within days, the President decided to terminate Corney. The President insisted that the termination letter, which was written for public release, state that Corney had informed the President that he was not under investigation. The day of the firing, the White House maintained that Corney’ s termination resulted from independent recommendations from the Attorney General and Deputy Attorney General that Corney should be discharged for mishandling the Hillary Clinton email investigation. But the President had decided to fire Corney before hearing from the Department of Justice. The day after firing Corney, the President told Russian officials that he had “faced great pressure because of Russia,” which had been “taken off’ by Corney’s firing. The next day, the President acknowledged in a television interview that he was going to fire Corney regardless of the Depattment of Justice’ s recommendation and that when he “decided to just do it,” he was thinking that “this thing with Trump and Russia is a made-up story.” In response to a question about whether he was angry with Corney about the Russia investigation, the President said, “As far as I’m concerned, I want that thing to be absolutely done properly,” adding that firing Corney “might even lengthen out the investigation.”