The following awareness briefs were produced in 2014 by the International Association of Chiefs of Police under a grant from the U.S. Department of Justice Office of Community Oriented Policing Services. 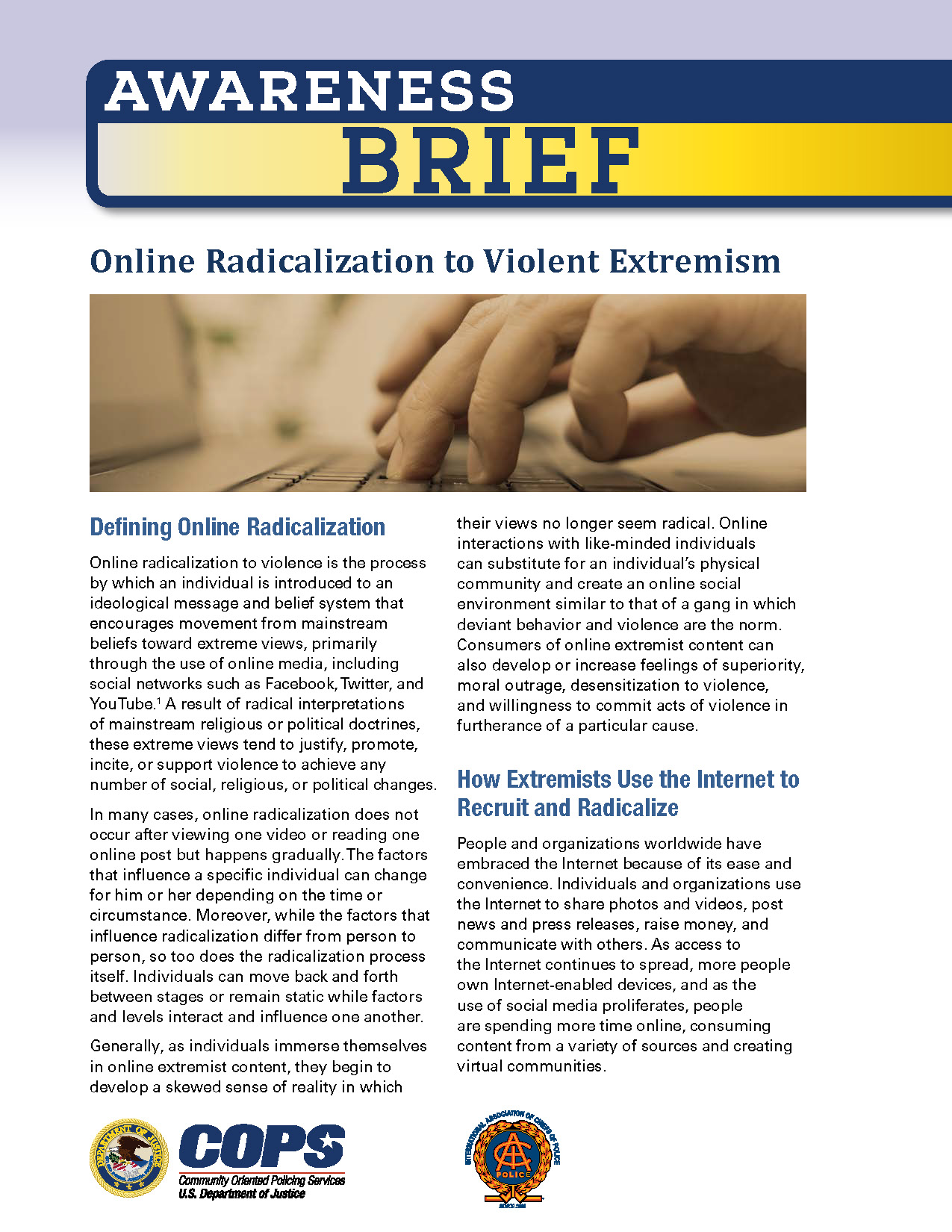 Generally, as individuals immerse themselves in online extremist content, they begin to develop a skewed sense of reality in which their views no longer seem radical. Online interactions with like-minded individuals can substitute for an individual’s physical community and create an online social environment similar to that of a gang in which deviant behavior and violence are the norm. Consumers of online extremist content can also develop or increase feelings of superiority, moral outrage, desensitization to violence, and willingness to commit acts of violence in furtherance of a particular cause.

Although individuals and organizations worldwide use Twitter for a variety of legitimate reasons, violent extremists, gangs, and terrorist groups use it to connect with their supports. The following identifies the ways domestic and international extremists of all persuasions use Twitter to promote violence:

Twitter provides violent extremists with an international recruiting ground. From November 2010 to February 2012, the number of Internet users who used Twitter nearly doubled. Twitter is available around the world, and the site supports more than 35 languages.

Extremists take advantage of the fact that parents and law enforcement often are not aware of the dangers that could be present when a young person spends large amounts of time on Twitter. Extremist individuals and organizations use this viewing potential to create lines of communication, making it easier for extremists to find, recruit, groom, and communicate with young people worldwide. This aids extremist groups intent on attacking Western countries and their interests in creating an international network of followers that can be radicalized to violence.

Extremists also post tips and guidance aboutoperational and tactical information, gathering counterintelligence, and coordinating attacks. For example, information about various explosives and commonly used weapons, information about how to avoid arousing suspicion, videos of successful operations, and links to other websites are the most common types of content these individuals and groups post.

By only posting certain information onFacebook and linking to third-party sites with graphic videos and other violent content, extremists are able to abide by Facebook’s terms and policies and still spread essential operational and tactical information to interested parties.

Violent individuals and groups also gatherinformation about law enforcement strategies, tactics, and locations based on content posted on their Facebook pages. In addition, pictures uploaded to Facebook that contain embedded geolocation data as well as status updates posted by individual officers or agencies have been used by violent extremists to modify their tactics and plan attacks. Extremists can also use the chat function to exchange private messages and information and to coordinate attacks in real-time.