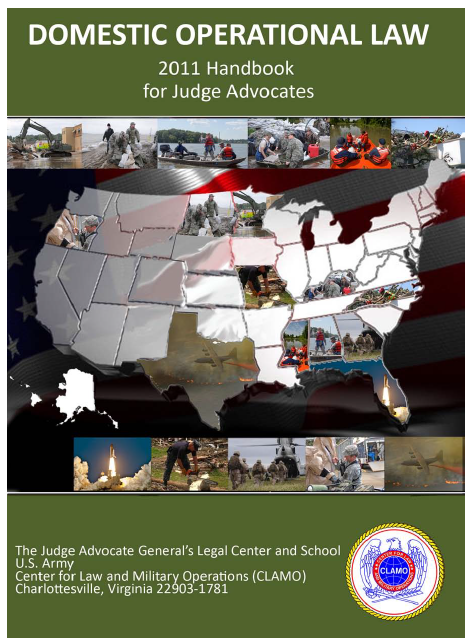 The Domestic Operational Law (DOPLAW) Handbook for Judge Advocates is a product of the Center for Law and Military Operations (CLAMO). Its content is derived from statutes, Executive Orders and Directives, national policy, DoD Directives, joint publications, service regulations and field manuals, and lessons learned by judge advocates and other practitioners throughout federal and state government. This edition includes a substantial revision of Chapter 3, it incorporates new guidance as set for forth Department of Defense Directive 3025.18, Defense Support of Civil Authorities (DSCA), it provides amplifying information on wildfire response, emergency mutual assistance compacts, the role of the National Guard and Army units such as Army North and Joint Task Force—Civil Support, and it discusses the 2010 Deepwater Horizon oil spill.

The Handbook is designed to serve as a working reference and training tool for judge advocates. However, this Handbook is not a substitute for independent research. With the exception of footnoted doctrinal material, the information contained in this Handbook is not doctrine. Judge Advocates advising in this area of the law should monitor developments in domestic operations closely as the landscape continues to evolve. Further, the information and samples provided in this Handbook are advisory only. Finally, the content and opinions expressed in this Handbook do not represent the official position of the U.S. Army or the other services, the National Guard Bureau, the Office of The Judge Advocate General, The Judge Advocate General’s Legal Center and School, or any other government agency.

Broadly stated, the CDO mission assists civil authorities in restoring law and order in the United States and its territories.58 This mission statement, while not duplicating the language in the Insurrection Act allowing for the use of federal forces to “suppress” insurrection, provides wide latitude to the President to use federal forces to assist civil law enforcement in “restoring” law and order.

The restoration of law and order must be distinguished from the preservation of law and order. CDO mission statements do not allow the joint civil disturbance task force commander to undertake preservation missions. It is generally agreed that missions to restore law and order include dispersing unauthorized assemblages, patrolling disturbed areas, maintaining essential transportation and communications systems, setting up roadblocks, and cordoning off areas. Care should be taken before a military commander accepts missions that are routine maintenance of civil order.

The CONPLANs provide the basis for all preparation, deployment, employment, and redeployment of Department of Defense component forces, including National Guard forces called to active federal service, for use in domestic civil disturbance operations, in support of civil authorities as directed by the President. The concept of a civil disturbance operation is multi-phased: Phase 0, Shape; Phase I, Anticipate; Phase II, Respond (deployment can occur in either Phase I or Phase II); Phase III, Operate; Phase IV, Stabilize; and Phase V, Transition (redeployment). Prior to deployment, military forces maintain five preparedness postures, called Civil Disturbance Conditions (CIDCONS) in order to alert and react to potential civil disturbance operations. Changes in the CIDCON level are directed by the JDOMS.

3. The Standing Rules for the Use of Force for U.S. Forces

Civil disturbance operations are conducted in accordance with Appendix L of the Standing Rules of Engagement/Standing Rules for the Use of Force for U.S. Forces (SRUF). Guidance on how and when forces can use force in a CDO mission are detailed in that annex. Although the CJCSI is classified, Annex L is not and can be shared with our mission partners.

a. Custody and Detention

All apprehensions should be made by the civil police force unless they are not available or require assistance. Military forces have the authority to detain rioters, looters, or other civilians committing criminal offenses. Civilians taken into custody should be transferred to civilian law enforcement authorities as soon as possible.

All members of the force must remember that state and federal criminal law and procedure govern apprehension. Apprehension is justified only on the basis of probable cause to believe that an offense has been committed and that the person to be apprehended committed the offense. Soldiers should not question detainees beyond basic pedigree such as name and address. If formal questioning of an offender is necessary, civilian police should conduct the interview. If civilian police are not available, CID agents or military police may conduct interviews only if the interview is essential to the civil disturbance mission. Actions taken by Soldiers that do not conform to criminal law constitutional standards could jeopardize future prosecution and subject Soldiers and their Commanders to criminal and/or civil liability.

b. Search and Seizure

CDO CONPLANs anticipate that military forces will generally not be involved in searches unless there is “an immediate danger of violence, destruction of evidence, or escape of violent persons unless the search is conducted without delay.” In all other cases, local authorities should conduct searches. When required to perform searches, federal armed forces may conduct warrantless searches under the same constitutional parameters imposed upon law enforcement officials. Joint Civil Disturbance Task Force forces conducting a warrantless search will fully document the reasons for the search as soon as is reasonably convenient.69 Generally these searches are limited to the following incidents.

If there is a reasonable suspicion based upon articulable facts that a person has committed, is committing, or is about to commit a crime, that person may be temporarily stopped and questioned about his activities. The stop must be limited in duration to that which is reasonably necessary to investigate the suspicion. If there is a reasonable suspicion based on articulable facts that a person is armed or is carrying instruments of violence and that the individual presents an immediate risk of harm, members of the armed force may conduct a “frisk” (an external “patdown” of the clothing) for weapons. Any weapons found during a frisk may be removed from the individual and seized.

Military forces assisting law enforcement may make a search without a warrant when they have reason to believe (probable cause) that weapons, objects related to criminal activity, or persons believed to have committed an offense, are in the place to be searched; and they have reason to believe that the delay necessary to obtain a search warrant would result in removal of the weapons or destruction of the objects related to criminal activity. For example, Joint Civil Disturbance Task Force forces may stop and search an automobile without a warrant when there is reason to believe that the automobile contains weapons or instruments of violence and/or contains an individual reasonably believed to have committed violence.

Military forces in a civil disturbance operation may make an immediate entry into a building when there is reason to believe that entry is necessary to prevent injury to persons, serious damage to property, loss of evidence, to protect public safety, or to render aid to someone who is in danger.

Military forces pursuing a person who they have reason to believe has just committed a serious crime, may enter a vehicle or building believed to be entered by the suspect and search the building or vehicle for the person or any weapons that might be used to further his escape.

During the course of otherwise lawful activity, military forces may seize any unlawful weapons or objects related to criminal activity which they observe in plain view. When conducting warrantless searches that require a probable cause determination, military forces can obtain advice from a judge advocate; however, the probable cause determination must be made personally by the individual desiring to conduct the search.

When feasible, all searches conducted by military personnel will be conducted by two personnel with the actual search performed by someone of the same sex.76 A hand receipt or some similar document should be prepared when items of personal property are seized from an individual.

Should the Task Force be required to operate a detention facility, the detention facility standards and operations should conform, to the maximum extent possible, to current DoD confinement facility operations and will be under the professional supervision and control of Military Police personnel. The establishment and operation of military detention facilities is a temporary expedient and is authorized only until such time as the custody of detained persons can be transferred to civil authorities.

Normally, for CDO the deployment and use of riot control agents is allowed as a matter of U.S. policy. However, initial approval authority for its deployment and use may be retained at a level higher than the Joint Civil Disturbance Task Force Commander and may require a specific request.