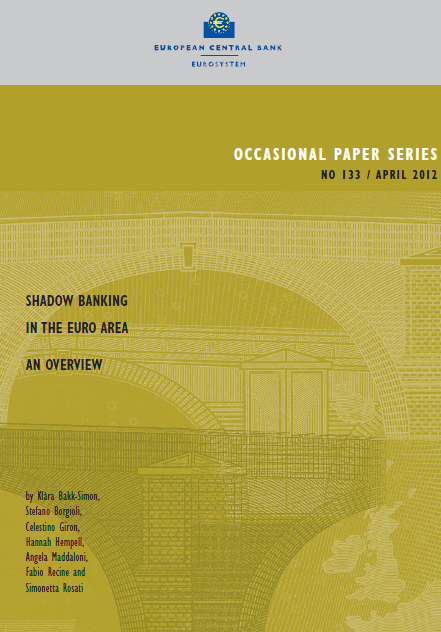 SHADOW BANKING IN THE EURO AREA: AN OVERVIEW

Shadow banking, as one of the main sources of financial stability concerns, is the subject of much international debate. In broad terms, shadow banking refers to activities related to credit intermediation and liquidity and maturity transformation that take place outside the regulated banking system.

This paper presents a first investigation of the size and the structure of shadow banking within the euro area, using the statistical data sources available to the ECB/Eurosystem.

Although overall shadow banking activity in the euro area is smaller than in the United States, it is significant, at least in some euro area countries. This is also broadly true for some of the components of shadow banking, particularly securitisation activity, money market funds and the repo markets.

This paper also addresses the interconnection between the regulated and the non-bank-regulated segments of the financial sector. Over the recent past, this interconnection has increased, likely resulting in a higher risk of contagion across sectors and countries. Euro area banks now rely more on funding from the financial sector than in the past, in particular from other financial intermediaries (OFIs), which cover shadow banking entities, including securitisation vehicles. This source of funding is mainly shortterm and therefore more susceptible to runs and to the drying-up of liquidity. This finding confirms that macro-prudential authorities and supervisors should carefully monitor the growing interlinkages between the regulated banking sector and the shadow banking system. However, an in-depth assessment of the activities of shadow banking and of the interconnection with the regulated banking system would require further improvements in the availability of data and other sources of information.

This paper presents a preliminary investigation of the size and the structure of shadow banking in the euro area, as a contribution to the international and European debate on this issue. In broad terms, shadow banking refers to activities related to credit intermediation, liquidity and maturity transformation that take place outside the regulated banking system. There is widespread international agreement on the need to better understand the activities of shadow banking and the related financial stability risks. Moreover, the forthcoming implementation of Basel III, with the introduction of more stringent capital and liquidity requirements for credit institutions, and the provisions to be applied to insurers may provide further incentives for banks to shift part of their activities outside of the regulated environment and therefore increase shadow banking activities.

Evaluating the size of the shadow banking system in the euro area is not straightforward. A quantitative assessment of the activities of the shadow banking sector can only be based on data sources that unfortunately were not designed specifically for this purpose (i.e. flow-of-funds data and monetary and financial statistics). Moreover, for some activities and markets there are no official data available.

A proxy for the activities of shadow banking in the euro area can be derived from the analysis of the balance sheets of OFIs, a sector which excludes insurance corporations and pension funds but covers most of the agents engaging in shadow banking. Regarding the dynamics of shadow-banking activities, assets of OFIs grew rapidly in the run-up to the crisis, in the period 2005-07. Starting at the end of 2007, OFI intermediation declined sharply in the context of the general deleveraging triggered by the financial crisis.

The paper investigates some key components of shadow banking. In particular, it looks at financial entities other than banks involved in credit intermediation, such as securitisation vehicles, and at the financial intermediaries and markets providing funding to the banks, such as money market funds (MMFs) and the repo market. The data suggests the following.

(i) Securitisation issuance was smaller in volume in the euro area than in the United States before the crisis (around 5% and 12% of GDP respectively) and remains less developed.

(ii) Assets under management by MMFs amounted to €1.83 trillion and €1.1 trillion in the United States and in the euro area respectively by the second quarter of 2011. However, it should be pointed out that in the euro area MMFs are a somewhat heterogeneous group (even if the CESR, i.e. the predecessor of the European Securities and Markets Authority, published in 2010 guidelines on a Common Definition of European Money Market Funds).

(iii) The repo market is a key source of funding in both the United States and the euro area.

The paper also addresses the interconnection between regulated and non-regulated segments of the financial sector undertaking banking activities. Over the recent past this interconnection has been increasing, likely resulting in higher risk of contagion across sectors and countries. Euro area banks rely more than in the past on funding from the financial sector and in particular from the OFI sector, which covers shadow banking entities including securitisation vehicles. This source of funding is mainly short-term and therefore more susceptible to runs and to the drying-up of liquidity. The relative size and relevance of shadow banking intermediation differs significantly across euro area countries.

A more in-depth assessment of the activities of shadow banking and of the interconnection with the regulated banking system would require an improvement in the availability of data and other related information. More than 60% of the assets that are considered part of shadow banking activities in the euro area are linked to financial institutions for which high frequency statistical information is not available. Similarly, very scarce and non-standardised information is available on repo markets. Moreover, the aggregate data collected for the euro area are not detailed enough to allow a full understanding of key elements such as the presence of maturity transformation and leverage and the possible channels for contagion, which are of particular importance when evaluating possible regulatory measures. The paper concludes with some preliminary considerations regarding possible measures to address data gaps and regulatory options. 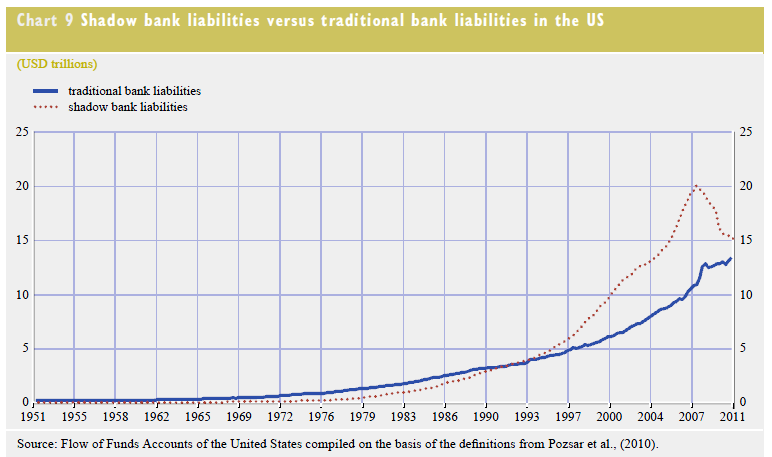