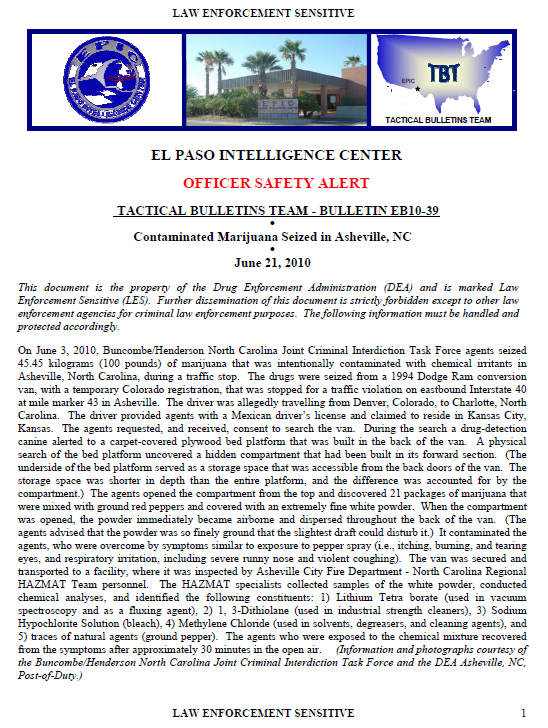 On June 3, 2010, Buncombe/Henderson North Carolina Joint Criminal Interdiction Task Force agents seized 45.45 kilograms (100 pounds) of marijuana that was intentionally contaminated with chemical irritants in Asheville, North Carolina, during a traffic stop. The drugs were seized from a 1994 Dodge Ram conversion van, with a temporary Colorado registration, that was stopped for a traffic violation on eastbound Interstate 40 at mile marker 43 in Asheville. The driver was allegedly travelling from Denver, Colorado, to Charlotte, North Carolina. The driver provided agents with a Mexican driver’s license and claimed to reside in Kansas City, Kansas. The agents requested, and received, consent to search the van. During the search a drug-detection canine alerted to a carpet-covered plywood bed platform that was built in the back of the van. A physical search of the bed platform uncovered a hidden compartment that had been built in its forward section. (The underside of the bed platform served as a storage space that was accessible from the back doors of the van. The storage space was shorter in depth than the entire platform, and the difference was accounted for by the compartment.) The agents opened the compartment from the top and discovered 21 packages of marijuana that were mixed with ground red peppers and covered with an extremely fine white powder. When the compartment was opened, the powder immediately became airborne and dispersed throughout the back of the van. (The agents advised that the powder was so finely ground that the slightest draft could disturb it.) It contaminated the agents, who were overcome by symptoms similar to exposure to pepper spray (i.e., itching, burning, and tearing eyes, and respiratory irritation, including severe runny nose and violent coughing). The van was secured and transported to a facility, where it was inspected by Asheville City Fire Department – North Carolina Regional HAZMAT Team personnel. The HAZMAT specialists collected samples of the white powder, conducted
chemical analyses, and identified the following constituents: 1) Lithium Tetra borate (used in vacuum spectroscopy and as a fluxing agent), 2) 1, 3-Dithiolane (used in industrial strength cleaners), 3) Sodium Hypochlorite Solution (bleach), 4) Methylene Chloride (used in solvents, degreasers, and cleaning agents), and 5) traces of natural agents (ground pepper). The agents who were exposed to the chemical mixture recovered from the symptoms after approximately 30 minutes in the open air. (Information and photographs courtesy of the Buncombe/Henderson North Carolina Joint Criminal Interdiction Task Force and the DEA Asheville, NC, Post-of-Duty.) 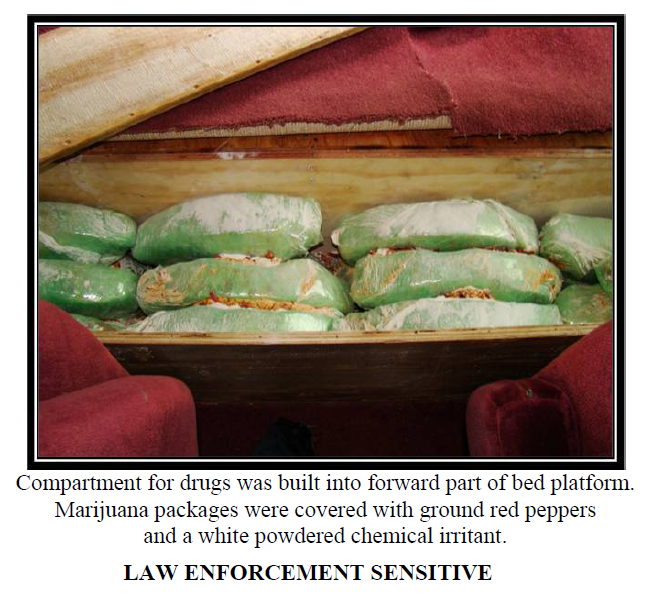