For more information on the following document, see our article FBI Finds “Minimal Correlation” Between Suicide Vests Used in Middle East and Europe. 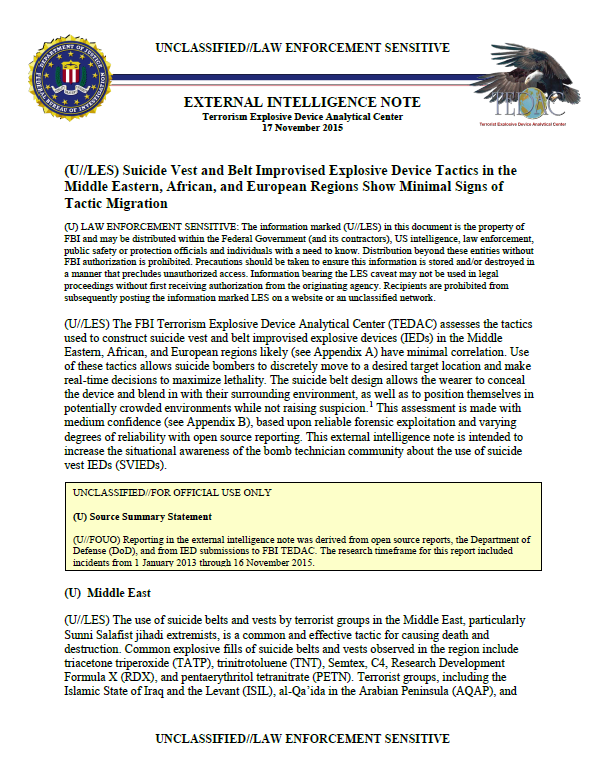 (U//LES) The FBI Terrorism Explosive Device Analytical Center (TEDAC) assesses the tactics used to construct suicide vest and belt improvised explosive devices (IEDs) in the Middle Eastern, African, and European regions likely (see Appendix A) have minimal correlation. Use of these tactics allows suicide bombers to discretely move to a desired target location and make real-time decisions to maximize lethality. The suicide belt design allows the wearer to conceal the device and blend in with their surrounding environment, as well as to position themselves in potentially crowded environments while not raising suspicion. This assessment is made with medium confidence (see Appendix B), based upon reliable forensic exploitation and varying degrees of reliability with open source reporting. This external intelligence note is intended to increase the situational awareness of the bomb technician community about the use of suicide vest IEDs (SVIEDs).

(U//LES) The use of suicide belts and vests by terrorist groups in the Middle East, particularly Sunni Salafist jihadi extremists, is a common and effective tactic for causing death and destruction. Common explosive fills of suicide belts and vests observed in the region include triacetone triperoxide (TATP), trinitrotoluene (TNT), Semtex, C4, Research Development Formula X (RDX), and pentaerythritol tetranitrate (PETN). Terrorist groups, including the Islamic State of Iraq and the Levant (ISIL), al-Qa’ida in the Arabian Peninsula (AQAP), and Tehrik-e Taliban Pakistan, are known to use the previously listed explosives in their constructed IEDs.

(U) A strategic study conducted by the Institute of National Security Studies (INSS) of suicide bombings in 2014 across the Middle East region showed an increase in the number of suicide attacks from 2013. Approximately 370 attacks occurred, with approximately 2,750 victims, compared to 163 attacks in 2013, with approximately 1,950 victims. A significant increase was evident in Iraq (271 in 2014 versus 98 in 2013), Yemen (29 versus 10), Lebanon (13 versus 3), and Libya (11 versus 1). The number of suicide bombing attacks carried out in Syria (41) remained the same. In Egypt there were four suicide attacks compared with six the previous year.

(U//LES) The variations observed in this broad comparison of suicide vest and belt IEDs across these three regions do not indicate a clear IED tactic migration, but may indicate tactic or construction influences. TEDAC generally assumes the similarities between suicide vests and belts from different regions likely indicate common training or common IED facilitators. These similarities include, but are not limited to, overall IED construction, wiring techniques, common explosives, initiators, switches, electronic diagrams, enhancements, and employment. The types of suicide vests and belt IEDs observed in each region within this report differ broadly in many characteristics, resulting in an inconclusive determination that the suicide vest and belt IEDs prevalent in any one area translate to tactic migration.

(U) Analysis of Alternatives

(U//LES) Alternatively, similarities in IED devices generally, across different regions, may be a product of independent open source research, thus resulting in a false link between devices and subjects.

(U//LES) FBI TEDAC assesses it is likely the suicide vest and belt IED tactics observed in Europe, Africa, and the Middle East are likely influenced by individuals who effectively employ these devices. This assessment is made with medium confidence, based on open source, DoD, and FBI reporting. These similarities are likely to be effected by multiple factors, including available materials, training, and local or national counter-IED policies and investigations. FBI TEDAC assesses forensic and technical exploitation of suicide vest and belts will provide the greatest opportunity to identifying key components for device attribution and overall strategic analysis of migration tactics.