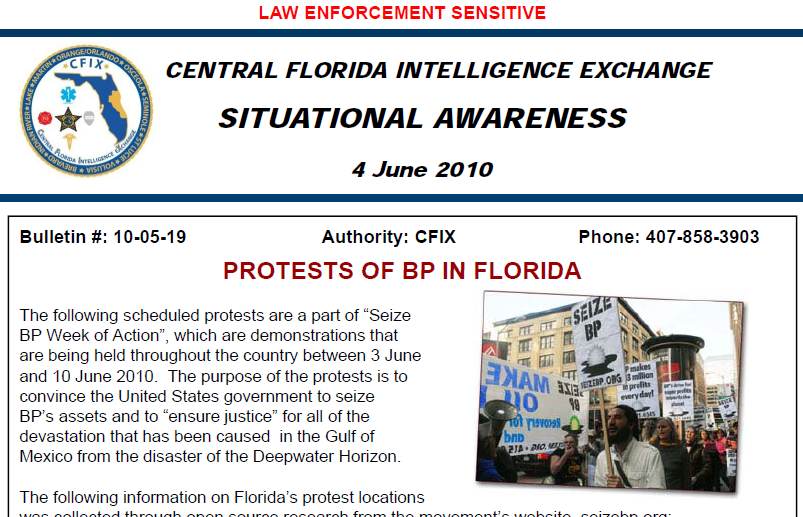 A portion of one of the Central Florida Intelligence Exchange reports discussing BP protests.

Several restricted documents produced by the Central Florida Intelligence Exchange (CFIX) and obtained by Public Intelligence indicate that a variety of protests and political events are monitored by the regional fusion center for potential threats and violent activity.  These events span the political spectrum from a summit hosted by Ron Paul’s Campaign for Liberty to anti-war protests conducted by Code Pink and Veterans for Peace.  While the documents make no mention of specific threats arising from the events, they do indicate that the fusion center monitors political action in a variety of forms and sometimes requests law enforcement officers to report on constitutionally-protected activities.

A CFIX situational awareness bulletin from June 4, 2010 warns law enforcement officials to be aware of a series of protests against BP known as the “Seize BP Week of Action.”  The bulletin states that the “purpose of the protests is to convince the United States government to seize BP’s assets and to ‘ensure justice’ for all of the devastation that has been caused in the Gulf of Mexico from the disaster of the Deepwater Horizon.”  Though the bulletin clearly states that there are “no known threats to the event”, it nonetheless concludes that “unforeseen incidents may occur.”

In another bulletin from June 2, 2010, the CFIX warns about protests arising from the Israeli raid on the “Gaza Freedom Flotilla” in late May 2010.  The bulletin states that protests have erupted around the world in reaction to the event and though the “Central Florida Intelligence Exchange (CFIX) has no specific information regarding organized protests in Region 5 at this time . . . past incidents between Israel and Gaza have resulted in protests being held throughout the state.”  The bulletin goes on to request that law enforcement officers contact the fusion center if they are aware of such events occurring in their jurisdiction.

The weekly CFIX Domestic Security Intelligence Report from August 6, 2010 warns of multiple political events and protests alongside legitimate terrorist activity and Neo-Nazi rallies.  One of these events is the “2nd Annual Florida Liberty Summit” organized by the Campaign for Liberty, a group founded by Congressman Ron Paul.  The report quotes from the Campaign for Liberty website, emphasizing that the event is described as being a way for “liberty minded activists . . . to network, learn, and build as our grassroots Revolution to reclaim our Republic and restore our Constitution.”  The report also notes projected attendance levels and indicates surveillance of attendance levels at past events.

Another event mentioned in the Domestic Security Intelligence Report is a Code Pink and Veterans for Peace Rally at Quantico Marine Corps Base in Virginia.  The rally was held August 8, 2010 in support of PFC Bradley Manning who is accused of disclosing a large amount of classified material to WikiLeaks, including the diplomatic cables the group is currently releasing.  An “analyst note” relating to the event states that there are no known threats relating to the protest, however, “in the past members of CodePINK have been arrested for their publicity stunts in order to achieve their goals of ending the wars in Iraq and Afghanistan, stopping new wars, and redirecting government resources into healthcare, education, “green jobs” and other life-affirming activities.”  On the page of the report that references the Bradley Manning rally, every other event listed is associated with Neo-Nazism, including events held by Aryan Nations groups and a rally of the National Socialist Movement in Tennessee.

Recent monitoring and surveillance of protest attendance, locations, purposes and motivations is not limited to these reports.  In September, an Israeli company under contract with the Pennsylvania Office of Homeland Security produced a number of anti-terrorism bulletins discussing protests throughout the area that related to everything from BP’s oil spill to natural gas drilling.  Likewise, a recent report from the fusion center in Minnesota that was disclosed and published on this site requested that law enforcement officials report information regarding a charitable motorcycle run known as the Flood Run.  Though the annual event raises substantial sums of money for local children’s hospitals, the potential presence of “outlaw motorcycle gangs” required that law enforcement report information regarding the potential movements of “gang members” at the event.  To aid in this endeavor, the document provided a handy guide detailing patches used by a number of “motorcycle gangs” throughout the area.  The ultimate connection between affiliation with these groups and violent or terrorist activity is unclear and is never discussed in the report.