The following paper detailing “recommended guidelines” for the domestic use of unmanned aircraft was released earlier this month by the International Association of Chiefs of Police. 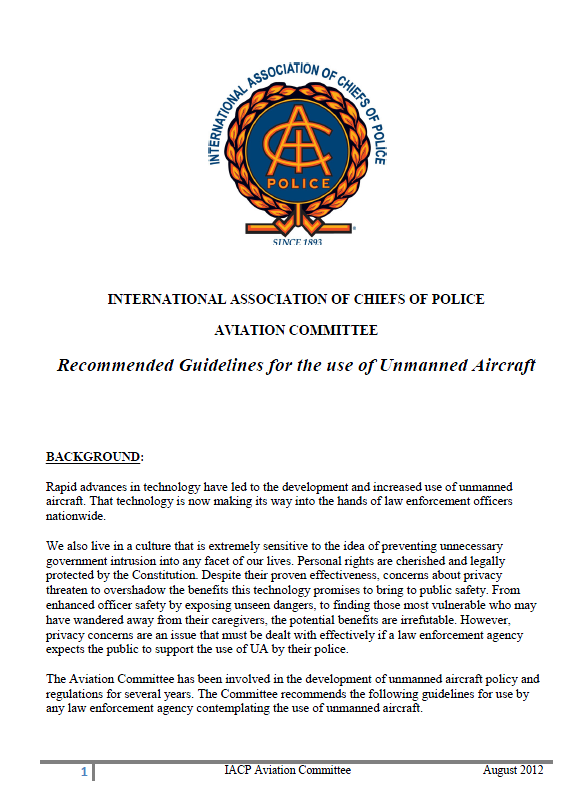 Rapid advances in technology have led to the development and increased use of unmanned aircraft. That technology is now making its way into the hands of law enforcement officers nationwide.

We also live in a culture that is extremely sensitive to the idea of preventing unnecessary government intrusion into any facet of our lives. Personal rights are cherished and legally protected by the Constitution. Despite their proven effectiveness, concerns about privacy threaten to overshadow the benefits this technology promises to bring to public safety. From enhanced officer safety by exposing unseen dangers, to finding those most vulnerable who may have wandered away from their caregivers, the potential benefits are irrefutable. However, privacy concerns are an issue that must be dealt with effectively if a law enforcement agency expects the public to support the use of UA by their police.

1. Model Aircraft – A remote controlled aircraft used by hobbyists, which is manufactured and operated for the purposes of sport, recreation and/or competition.
2. Unmanned Aircraft (UA) – An aircraft that is intended to navigate in the air without an on-board pilot. Also called Remote Piloted Aircraft and “drones.”
3. UA Flight Crewmember – A pilot, visual observer, payload operator or other person assigned duties for a UA for the purpose of flight.
4. Unmanned Aircraft Pilot – A person exercising control over an unmanned aircraft during flight.

1. Law enforcement agencies desiring to use UA should first determine how they will use this technology, including the costs and benefits to be gained.
2. The agency should then engage their community early in the planning process, including their governing body and civil liberties advocates.
3. The agency should assure the community that it values the protections provided citizens by the U.S. Constitution. Further, that the agency will operate the aircraft in full compliance with the mandates of the Constitution, federal, state and local law governing search and seizure.
4. The community should be provided an opportunity to review and comment on agency procedures as they are being drafted. Where appropriate, recommendations should be considered for adoption in the policy.
5. As with the community, the news media should be brought into the process early in its development.

1. The UA should have the ability to capture flight time by individual flight and cumulative over a period of time. The ability to reset the flight time counter should be restricted to a supervisor or administrator.
2. The aircraft itself should be painted in a high visibility paint scheme. This will facilitate line of sight control by the aircraft pilot and allow persons on the ground to monitor the location of the aircraft. This recommendation recognizes that in some cases where officer safety is a concern, such as high risk warrant service, high visibility may not be optimal. However, most situations of this type are conducted covertly and at night. Further, given the ability to observe a large area from an aerial vantage point, it may not be necessary to fly the aircraft directly over the target location.
3. Equipping the aircraft with weapons of any type is strongly discouraged. Given the current state of the technology, the ability to effectively deploy weapons from a small UA is doubtful. Further, public acceptance of airborne use of force is likewise doubtful and could result in unnecessary community resistance to the program.
4. The use of model aircraft, modified with cameras, or other sensors, is discouraged due to concerns over reliability and safety.

1. UA operations require a Certificate of Authorization (COA) from the Federal Aviation Administration (FAA). A law enforcement agency contemplating the use of UA should contact the FAA early in the planning process to determine the requirements for obtaining a COA.
2. UA will only be operated by personnel, both pilots and crew members, who have been trained and certified in the operation of the system. All agency personnel with UA responsibilities, including command officers, will be provided training in the policies and procedures governing their use.
3. All flights will be approved by a supervisor and must be for a legitimate public safety mission, training, or demonstration purposes.
4. All flights will be documented on a form designed for that purpose and all flight time shall be accounted for on the form. The reason for the flight and name of the supervisor approving will also be documented.
5. An authorized supervisor/administrator will audit flight documentation at regular intervals. The results of the audit will be documented. Any changes to the flight time counter will be documented.
6. Unauthorized use of a UA will result in strict accountability.
7. Except for those instances where officer safety could be jeopardized, the agency should consider using a “Reverse 911” telephone system to alert those living and working in the vicinity of aircraft operations (if such a system is available). If such a system is not available, the use of patrol car public address systems should be considered. This will not only provide a level of safety should the aircraft make an uncontrolled landing, but citizens may also be able to assist with the incident.
8. Where there are specific and articulable grounds to believe that the UA will collect evidence of criminal wrongdoing and if the UA will intrude upon reasonable expectations of privacy, the agency will secure a search warrant prior to conducting the flight.

1. Unless required as evidence of a crime, as part of an on-going investigation, for training, or required by law, images captured by a UA should not be retained by the agency.
2. Unless exempt by law, retained images should be open for public inspection.