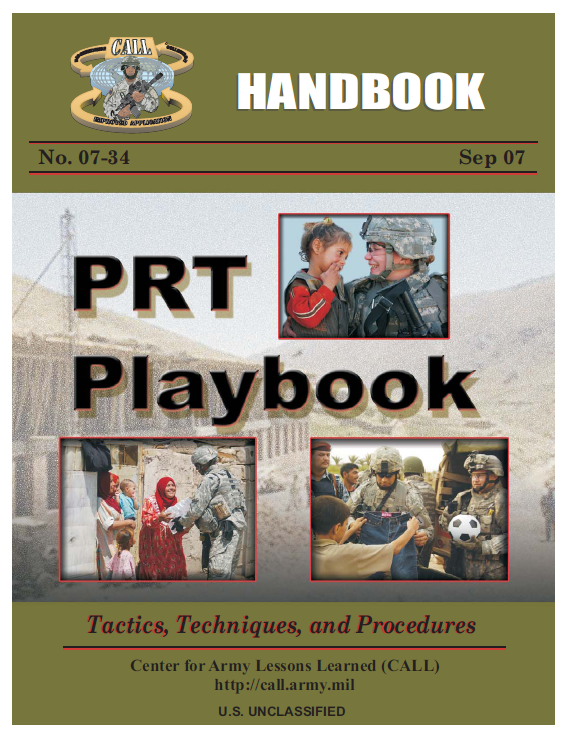 Provincial reconstruction teams (PRTs) were established as a result of the need to
develop the infrastructure necessary for the Afghan and Iraqi people to succeed in a post-conflict environment. The efforts of PRTs take place every day during a time when major conflict is commonplace in both countries. PRTs have become an integral part of the long-term strategy to transition the lines of security, governance, and economics to the indigenous people. Integrated appropriately, PRTs serve as combat multipliers for maneuver commanders engaged in governance and economics, as well as other critical lines of operation. In addition, PRTs serve as force multipliers for U.S. Government (USG) development agencies engaged across the stability and reconstruction sectors.

This playbook focuses on PRTs in general, with additional information specific to
Iraq and Afghanistan. The information contained in this playbook comes from
multiple sources inside and outside the USG with the understanding that the manner in which PRTs operate is likely to change over time.

The higher goal of military and civil action is to win over the population, while
killing the insurgents is a supporting or shaping effort. In other words, hostile
individuals do not create hostile populations, rather, hostile populations will
continue to create hostile leaders until the source of the hostility is alleviated.
A provincial reconstruction team (PRT) is an interim civil-military organization
designed to operate in semi-permissive environments usually following open
hostilities. The PRT is intended to improve stability in a given area by helping build
the host nation’s legitimacy and effectiveness in providing security to its citizens
and delivering essential government services.

Military forces conduct complementary stability, offensive, and defensive activities
as components of full-spectrum operations. Each campaign and major operation
requires original and varying combinations of the components of full-spectrum
operations appropriate to the situation. Full-spectrum operations are based on the
continuous interaction between friendly forces; adversaries; all the U.S.,
international, and nongovernmental civilian agencies; host nation civil authorities
concerned with the outcome; and the populations of areas affected. Civil authorities
range from strategic-level leaders to local government officials to religious leaders.
Affected populations may be of differing tribes or nations and of states on the
periphery of the conflict.

Military forces must defeat enemies and simultaneously help shape the civil
situation through stability operations. Shaping the civil situation in concert with
other U.S. government agencies, international organizations, civil authorities, and
multinational forces is important to campaign success. Stability operations may
complement and reinforce offensive and defensive operations, or they may be the
main effort of an operation. These operations may take place before, during, and
after major combat operations and seek to secure the support of civil populations in
unstable areas. Forces engaged in an operation predominated by stability tasks may
have to conduct offensive and defensive operations to defend themselves or destroy
forces seeking to challenge the stability mission. Following hostilities, forces
conduct stability operations to provide a secure environment for U.S., coalition,
multinational, and local civil authorities as they work to achieve reconciliation,
rebuild lost infrastructure, and resume vital services.

There are times when hostilities continue to exist in many forms during
stability-focused operations because of warlords, tribal competition, ethnic
rivalries, outlaws, terrorists, or insurgents. This can leave areas of a country caught
in the middle of the transition between major combat and relative stability. Combat
operations are very much “on again/off again” across parts of the country, and there
are areas that have not stabilized significantly and are at risk of “slipping back” if
security forces are removed. However, moving these areas further along is beyond
the expertise and capabilities of any one department or agency. The military can
operate in these unstable areas but lacks development skills. Diplomatic and
development agencies have these skills but are unable to operate in these areas
using their traditional delivery mechanisms because of the instability. Therefore,
this complex environment requires an integrated civilian-military operation focused
on achieving sufficient stability to allow reconstruction and development to begin.
PRTs were devised in 2002 as a means to solve this problem. A PRT stabilizes an
area through its integrated civilian-military focus. It combines the diplomatic,
military, and developmental components of the various agencies involved in the
stabilization and reconstruction effort. The PRT is designed to help improve
stability by building up the capacity of the host nation to govern; enhance economic
viability; and deliver essential public services, such as security, law and order,
justice, health care, and education. Once the stability objectives have been fulfilled,
PRTs can begin to dismantle and the traditional diplomatic and developmental
programs will operate within their normal venues.

This playbook provides a knowledge base to individuals operating in, adjacent to,
or in support of a PRT, enabling these individuals to work effectively as a team to
achieve the purpose of the PRT and providing PRT members with shared
operational guidelines and insights into PRT best practices. 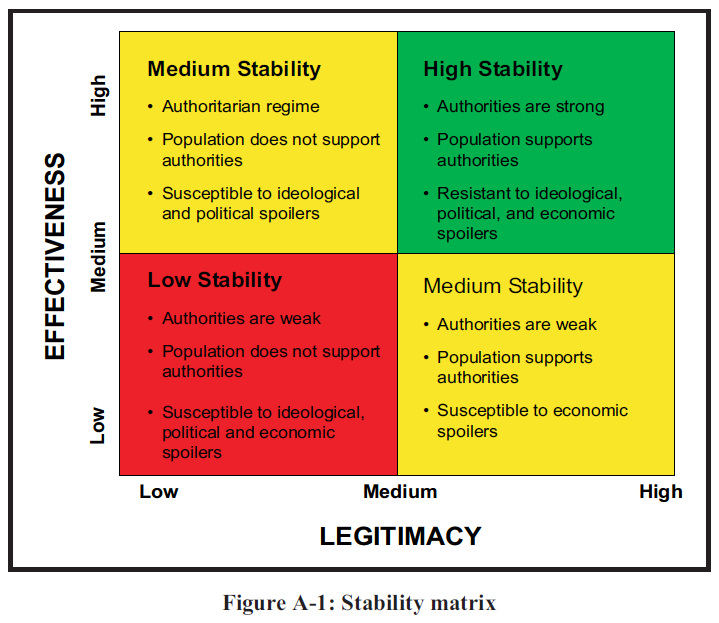 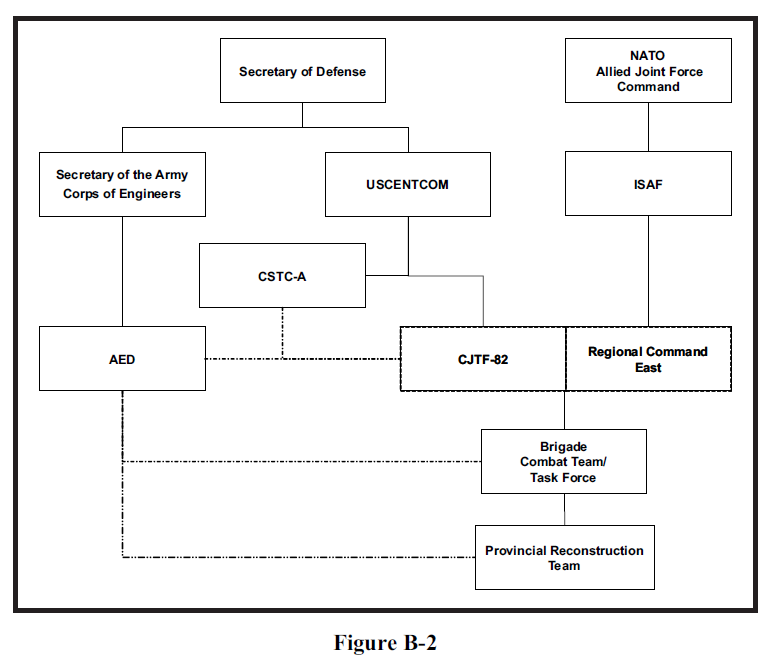 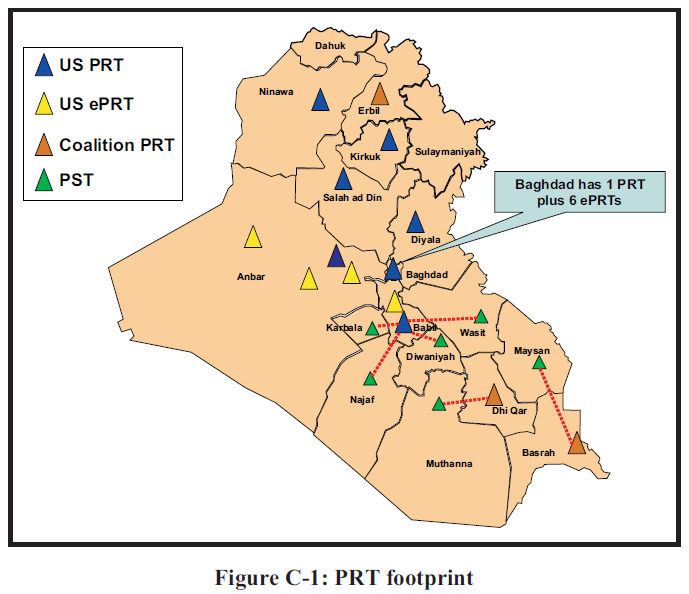 The provincial reconstruction team (PRT) concept envisions an integrated
civil-military organization expanding the reach of the U.S. government (USG) and
the wider international community assistance efforts from the environs of the
capitol to the provincial level to the local community. A PRT is generally
responsible for covering one province but may have responsibility for two or more
provinces or a large segment of a single province.

The PRT does not act as an alternative to a host nation’s government but rather
seeks to improve the governing capacity of the host nation. PRTs perform a vital
role in occupying the vacuum caused by a weak government presence and hence
deter agents of instability. The PRT focuses on three elements of stabilization and
reconstruction:

• Assist the establishment and improvement of local government, including
its connection to the central government and populace, by advising and
empowering stakeholders and legitimate governing bodies, influencing
“fence sitters,” and countering obstructionists and spoilers.
• Facilitate reconstruction at a pace that begins to:
º Provide basic services.
º Provide an economic system that supports the people.
º Gain popular buy-in for change and support of representative
government.
º Ensure popular expectations for international assistance are met or
abated.

The PRT is also not a development agency. The PRT’s role is to ensure
international efforts are in line with the host nation’s development intentions and, in
doing so, assess and act on the constraints to development. As the security
environment improves, the PRT is intended to phase out as stabilization and
reconstruction programs shift to longer-term development programs. The PRT
ceases to exist when normal development operations can be carried out without its
assistance. This evolution in execution of the PRT mission requires a change in
focus and an increased number of civilians with core competencies to address the
development aspects of stabilization and reconstruction.