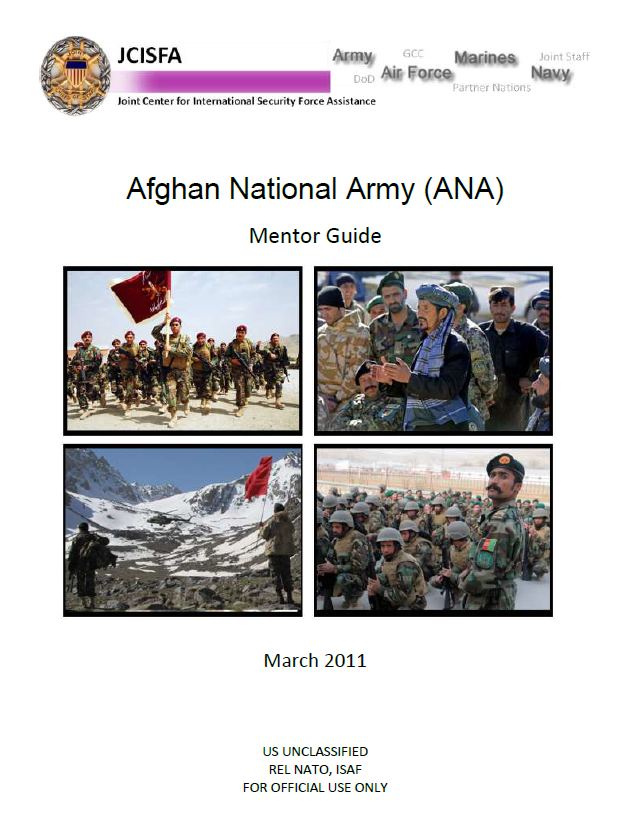 This guide is a JCISFA publication on mentoring the Afghan National Army and is applicable to advisors, mentors and partner forces executing Security Force Assistance (SFA) operations. The guide is a companion to the May 2009 JCISFA Afghan National Police Mentor Guide and addresses identified gaps in mentoring Afghan National Security Forces. The guide offers cultural background information, partner security force challenges, advisor/mentor best practices, and challenges. As the United States assists other nations, our forces must adopt a “by, with, and through” strategy to enable a supported nation and its security forces to generate and sustain capabilities institutionally and operationally. We can achieve this by advising and mentoring them, partnering with the supported nation and through development of the supported nation and its security forces so that they can do it themselves.

While not an inclusive guide, the information contained herein provides a starting point for advisors/mentors to develop a working relationship with the Partner Nation security forces and provide U.S. advisors a basic understanding of Afghan culture, history, and Afghan Army development challenges in order for them to become successful.

The Secretary of Defense established the Joint Center for International Security Force Assistance (JCISFA) Center, Fort Leavenworth, Kansas to institutionalize lessons and best practices from SFA operations. This information provides US forces a knowledge base to assist in the rebuilding of Partner Nation nation’s security forces during stability, security, transition, and reconstruction operations.

Serve as a DOD center of Excellence and US Armed Forces focal point to provide advice and assistance for international security force assistance missions that includes the tasks to organize, train, equip, and rebuild Partner Nation security forces

Advise combatant command on practices and proven tactics, techniques and procedures for rapid response to emerging security force assistance efforts, specific to the organizing, training and equipping of military, police, and border security forces and to the rebuilding of their security infrastructure

When directed, assist other nations that are conducting security force assistance missions as part of a larger regional engagement strategy

Ever since the fall of the Taliban regime, there are documented cases of the ANA abusing their power for personal gain or for other issues such as tribe domination or helping the insurgent cause. In order to win support of the people, the ANA must accomplish the following:

Convince the community that the army will contribute to the community’s return to normal life by protecting them from criminal activity and insurgent violence. The soldiers must continue to show they are part of the solution for the average citizen.

The ANA must strive to make life for the community better than life under the Taliban. Then the Taliban will have a hard time finding haven among the populace. People will turn on them and report their presence and activity to the ANA and ANP instead of tolerating their presence or criminal operations.

Soldiers must separate themselves from negative factors such as sectarian and ethnic violence, corruption, and political influence. This effort will be very difficult because these ―influencers are embedded in everything about this society. The Minister of Defense and army leadership must help the soldiers work within these differences. The desired end state is for soldiers to learn how to treat the populace with equality.

To improve relations with the Afghan people, the ANA will need to establish a bond of trust and cooperation upon their arrival to an area. The soldier must take steps to establish a relationship with the community they now serve. As the ANA gains the trust and confidence of the population they serve, a symbiotic relationship (you scratch my back, I scratch your back) evolves. This relationship built on trust increases the dialogue between the unit and the community, resulting in tips and information. Human source information from local nationals provides the most time-sensitive intelligence – intelligence delivered in a format the collector can describe with all five senses. While the police are often best suited to gather this information, they may not yet be established in the area or actively patrolling outside of the village proper due to the current security situation. In this scenario, the army may be the only government force in the area capable of providing security to the populace. Afghanis may never realize one hundred percent trust for the ANSF by all people; however, they must achieve a level of trust that enables peace, security, and a sense of normalcy if GIRoA wants to earn the acceptance of the population.

Effects of a Secure Environment

Establishing a safe environment will pay dividends to the ANA unit in their continuing efforts to reduce violence, establish order, and locate/eradicate other insurgent or criminal elements in the community. Beyond that, as security improves, the community will begin to live more normal lives with the return of work and commerce. As opportunities move into the area, the citizens will see that their government exists to serve, and helps them better improve themselves while making them more willing to support the government. This ―winning of hearts and minds‖ will then translate into the community providing greater support to the government, and the army being able to hand over the security mission to the police and redeploy out of that area.

This information will help the advisor understand what a typical ANA unit might look like to include their manning and equipping structures. Although the missions vary among the different corps, the equipment and capabilities are relatively similar. This portion provides information about the general design of the ANA, organizational structure, and authorized equipment.

Tashkil is a table of organization and equipment (TO&E) list in Excel spreadsheet format, by Unit type and is updated annually. The list provides required number of personnel by position and rank. It also provides the required quantity of equipment by unit and equipment type. The ANA unit commander requests fills in shortfalls based on authorizations in the Tashkil, budget permitting. As an Advisor this is an issue to observe. There may be differences between personnel present and personnel authorized, equipment present and equipment authorized. ANA Commanders often guard this document and resist letting others view it, which can point to corruption.

Comparison of Western vs. Afghan Soldiers

It is important to note that it is not the purpose of advisors to make the ANA look like a Western Army. The fact is that many facets of the western army model will not work in the tribal and economically lagging culture of Afghanistan. The country does not possess the financial resources to outfit and sustain the army with the technological weaponry present in most modern armies. Further, the literacy level of the population hinders the rapid introduction and employment of new military equipment and technology. Advisors should focus on basic soldiering, tactics and leadership skills. Ultimately it is up to the Afghan people to decide how their army will function and the models they will use to develop their force and responsibilities.

The key role for the advisor is to encourage the ANA to ensure that however they structure themselves and perform their mission that they develop into a professional and competent military organization. The importance of the Afghan people’s perception of the ANA cannot be overstated.