The following joint publication was originally posted online on the website of the Joint Chiefs of Staff.  The document was discovered by the Federation of American Scientists' Steven Aftergood and placed on the FAS website.  It was subsequently removed from the JCS website and replaced with a message stating that the document was only available from the "JEL+" or Joint Electronic Library. 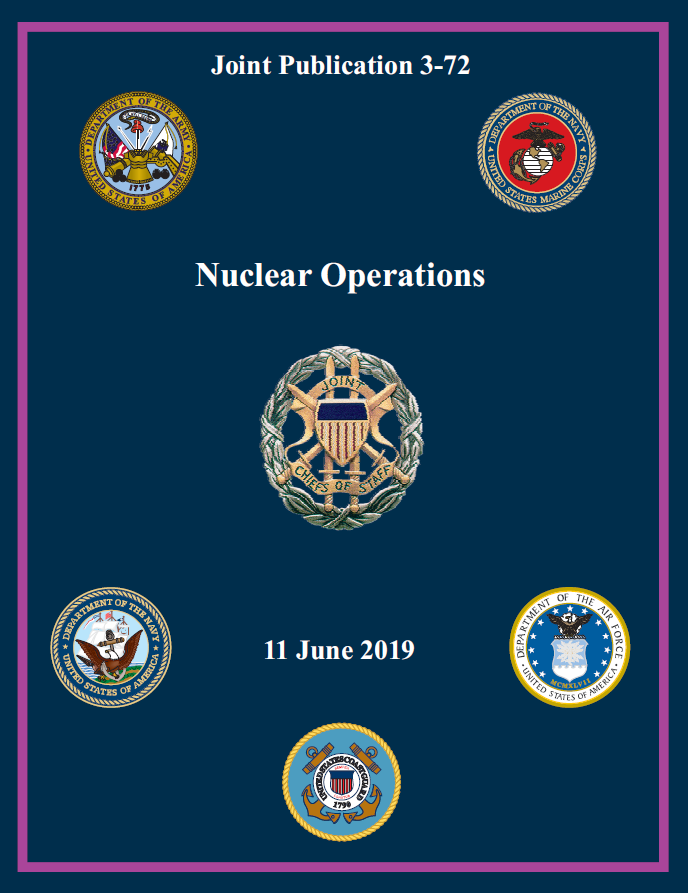 Nuclear weapons are a key feature of the security environment. Adversaries increasingly rely on nuclear weapons to secure their interests. Those seeking ways to use nuclear weapons for coercion and war termination present complex deterrence and escalation management challenges. US nuclear weapons and the associated capabilities needed to conduct nuclear operations are essential to ensure an effective deterrent.

US nuclear forces serve the national objective of maintaining peace through strength. The National Security Strategy and National Defense Strategy are supported through four principal roles for US nuclear forces that guide the development of US force capabilities and prescribe the use of these capabilities. These roles are complementary and interrelated, and the adequacy of US nuclear forces is assessed against each role and the strategy designed to fulfill it:

a. Deter nuclear and nonnuclear attack.
b. Assure allies and partners.
c. If deterrence fails, achieve US objectives.
d. Hedge against an uncertain future.

a. Deterrence is the prevention of action by the existence of a credible threat of unacceptable counteraction and/or belief that the cost of the action outweighs the perceived benefits. Credible deterrence operates by influencing adversary decision makers through the demonstration of US capability and strategic messaging of US resolve to employ capabilities that deny the benefits of adversary action and impose costs on them.

b. Credible nuclear capabilities are important, as the President must have the means to respond appropriately to an attack on the US, its allies, and partners. Nuclear forces must be prepared to achieve the strategic objectives defined by the President. Strategic deterrence does not stop once a conflict has started but continues throughout the entire range of military operations. The application of nuclear and/or conventional deterrence operations during all phases of planning and execution is critical to influence an adversary’s decision-making process, regardless of the stage of conflict.

c. In addition to deterring adversaries from launching large-scale conventional attacks or using weapons of mass destruction (WMD), nuclear forces extend deterrence to allies and partners. This supports nonproliferation efforts by dissuading nation states from developing nuclear capabilities of their own.

d. There is no “one size fits all” for deterrence. Consequently, the US applies a tailored and flexible approach to effectively deter a spectrum of adversaries, threats, and contexts. Nuclear weapons proliferation, acquisition of nuclear materials of concern, and exchange of technical expertise follow pathways and threat networks similar to those of other WMD proliferation.

a. The US maintains a triad of strategic nuclear forces consisting of land-based intercontinental ballistic missiles (ICBMs), submarine-launched ballistic missiles (SLBMs), and long-range bombers. Each system provides strength to the US nuclear force posture through unique and complementary attributes. Further, the strategic triad reduces the possibility that a technical problem in any one leg of the strategic triad or adversary technical advancement will leave the US at a strategic disadvantage.

b. ICBM. The ICBM force remains continuously on alert and provides the President with responsive options. Flexibility in response options and the ability to rapidly retarget complicates enemy attack planning. With dispersed basing, responsiveness, and robust command and control, the ICBM force creates an extraordinarily high threshold for a successful, large-scale, conventional or nuclear attack on the US homeland. The ICBM force is survivable from the standpoint that an enemy would be required to commit a large-scale expenditure of nuclear warheads to target all ICBM launch facilities and control centers.

c. SLBM. The ballistic missile submarine (nuclear-powered) (SSBN) and its associated SLBM provide an assured, survivable strike capability. The SSBN force provides the nation with a highly reliable, safe, secure, accurate, flexible, and effective deterrent capability that complicates a threat’s planning, forcing them to consider the response capability from SSBNs.

d. Long-Range Bombers. Long-range bombers are capable of striking targets around the globe, providing a visible and flexible nuclear deterrent capability, while assuring allies and partners. Bombers provide both standoff and penetrating capabilities needed to defeat a variety of threats, to include modern air defenses, mobile targets, and targets embedded in complex terrain. Unlike SLBMs and ICBMs, bombers are recallable.

Dual-Capable Aircraft. The US and select North Atlantic Treaty Organization (NATO) allies maintain dual-capable aircraft capable of delivering nuclear or conventional weapons in support of national strategic extended deterrence objectives and bolstering regional deterrence. These nuclear forces offer an important capability against regional threats, assuring allies of the US commitment to their security and are a clear and visible message to any threat.