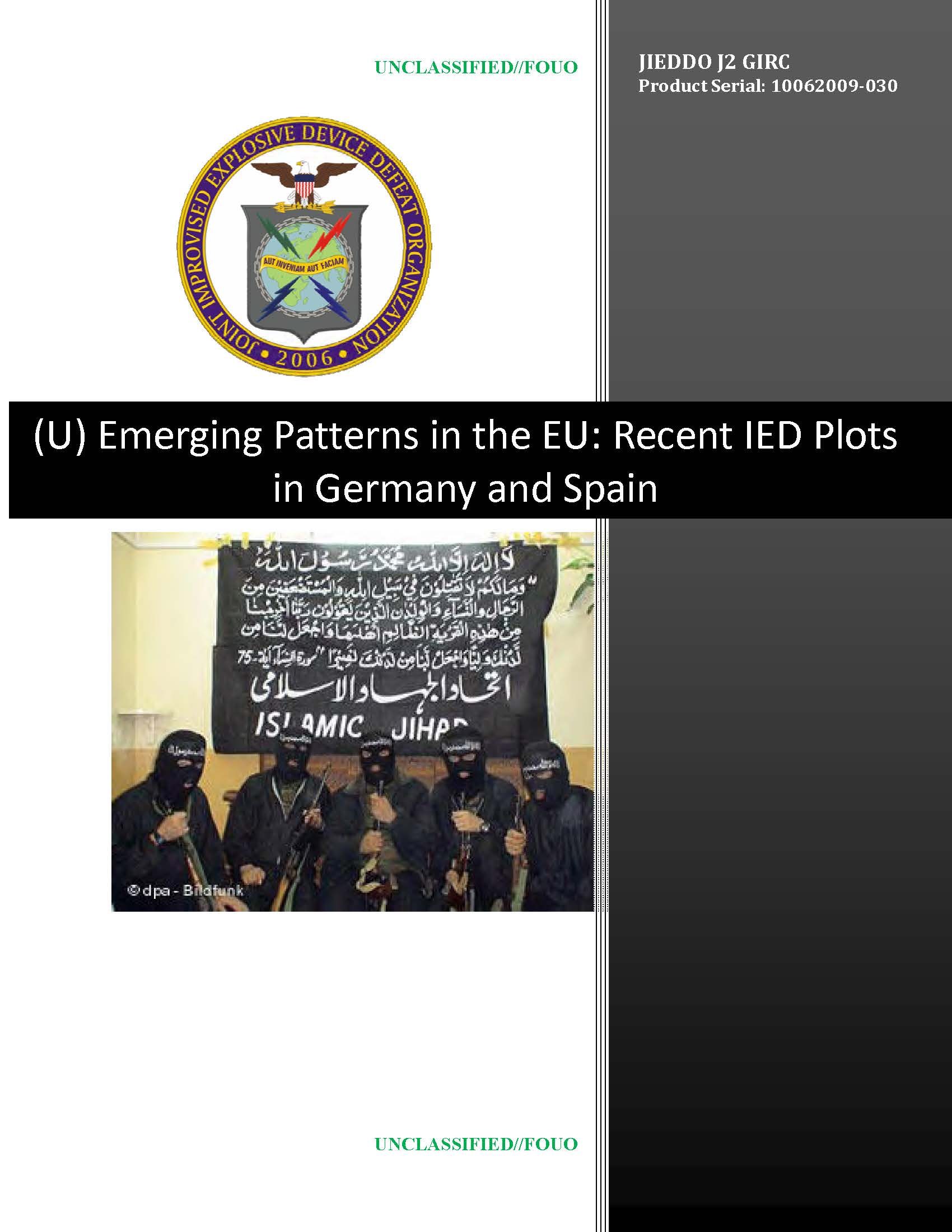 Emerging Patterns in the EU: Recent IED Plots in Germany and Spain

• (U//FOUO) Al Qaeda-directed networks intend to conduct attacks in the European Union (EU) that aim to:
o Generate discord among Coalition and NATO forces fighting in Iraq and Afghanistan;
o Weaken EU governments militarily and economically so that they will withdraw their forces from international operations in predominantly Muslim countries.
• (U//FOUO) German authorities arrested three men who were plotting to target U.S. and Uzbek military and diplomatic assets in Germany in September 2007.
• (U//FOUO) Spanish authorities arrested 14 suspects involved in a near-operational plot to target Barcelona’s subway system in January 2008.
• (U//FOUO) Improvised explosive devices (IEDs) are an essential element in both plots.
• (U//FOUO) Plots include several common characteristics, including specialization of cell members, leadership autonomy, the exploitation of small diaspora communities, and public claims of responsibility.

(U//FOUO) Despite official statistics showing a decrease in the number of arrests related to Salafist-jihadist activity, EU-based security services have thwarted numerous IED-centered plots since 2003. Many of the EU plots involve al Qaeda-networked terrorists in Afghanistan and Pakistan, and included plots in Spain, Germany, Italy, Belgium, and the United Kingdom (UK). Two recent plots are representative of the current IED threat in the EU: the Sauerland plot in Germany (2007) and the Barcelona plot in Spain (2008).

(U) Germany: The “Sauerland Plot”

(U//FOUO) German authorities arrested three men – two German nationals and one Turkish national – on 4 September 2007. According to contemporary reports, the suspects were arrested while in the process of mixing hydrogen peroxide-based explosives, which according to another report would have made the equivalent of 900 pounds of explosives. Cell leader Fritz Gelowicz confessed to receiving three months of training and operational direction at a camp run by the Islamic Jihad Union (IJU) in Mir Ali, North Waziristan, along the Afghan-Pakistan border. According to police authorities, all three suspects maintained contact with the IJU leadership in Pakistan after they returned to Germany. The group intended to target the Ramstein air base and possibly U.S. and Uzbek diplomatic missions in Germany.

(U//FOUO) The IJU claimed responsibility for the attempted attack in a “communiqué posted online on 11 September… claim[ing] that the IJU had intended to attack the United States and Uzbekistan because of their ‘injustice and brutal policies toward Muslims and Islam.’”