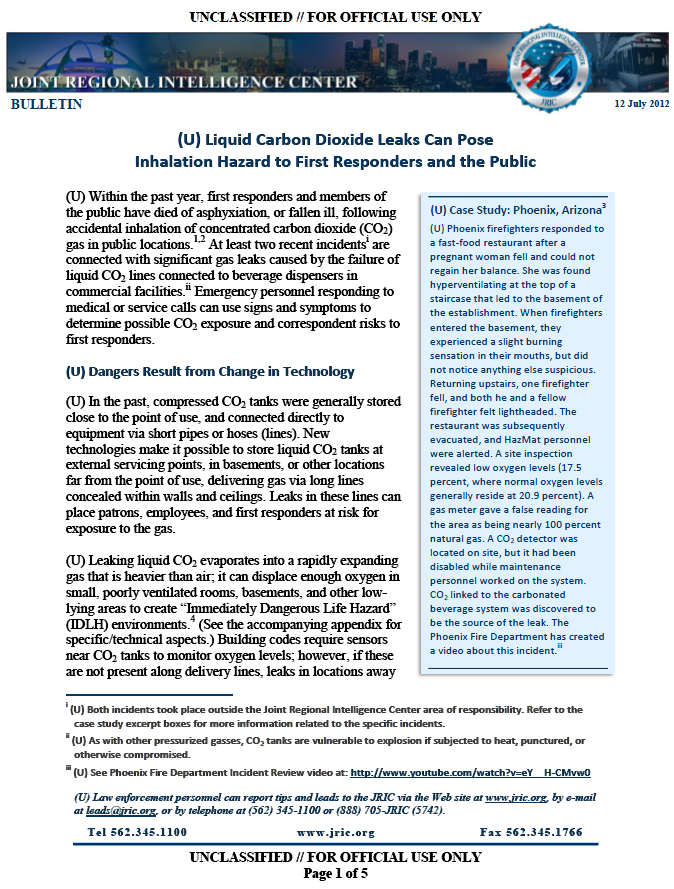 (U) Within the past year, first responders and members of the public have died of asphyxiation, or fallen ill, following accidental inhalation of concentrated carbon dioxide (CO2) gas in public locations. At least two recent incidents are connected with significant gas leaks caused by the failure of liquid CO2 lines connected to beverage dispensers in commercial facilities. Emergency personnel responding to medical or service calls can use signs and symptoms to determine possible CO2 exposure and correspondent risks to first responders.

(U) Dangers Result from Change in Technology

(U) In the past, compressed CO2 tanks were generally stored close to the point of use, and connected directly to equipment via short pipes or hoses (lines). New technologies make it possible to store liquid CO2 tanks at external servicing points, in basements, or other locations far from the point of use, delivering gas via long lines concealed within walls and ceilings. Leaks in these lines can place patrons, employees, and first responders at risk for exposure to the gas.

(U) Leaking liquid CO2 evaporates into a rapidly expanding gas that is heavier than air; it can displace enough oxygen in small, poorly ventilated rooms, basements, and other low-lying areas to create “Immediately Dangerous Life Hazard” (IDLH) environments. (See the accompanying appendix for specific/technical aspects.) Building codes require sensors near CO2 tanks to monitor oxygen levels; however, if these are not present along delivery lines, leaks in locations away from the tanks may go undetected. Sensors may be susceptible to failure or tampering.

(U) Indicators of Possible CO2 Exposure

(U) Obvious shortness of breath with visible symptoms will occur as the body compensates for lack of oxygen. The effects of oxygen deficiency, combined with the effects of CO2 toxicity, may cause an individual to feel ill, potentially showing signs such as headache, nausea, dizziness, or mental confusion. Most individuals will begin to show signs and symptoms when exposed to concentrations of CO2, starting as low as seven percent, for approximately 15 minutes; symptoms may vary according to the level of CO2 concentration and length of exposure.

(U) Signs and symptoms indicating possible exposure to CO2 include: