The following document was obtained from a website associated with the Regional Information Sharing Systems Program. 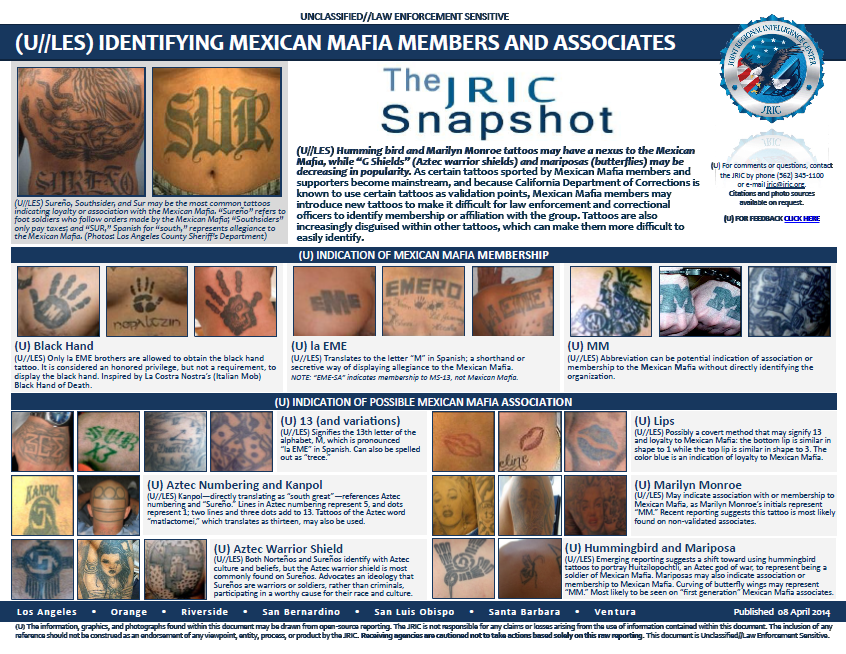 (U//LES) Humming bird and Marilyn Monroe tattoos may have a nexus to the Mexican Mafia, while “G Shields” (Aztec warrior shields) and mariposas (butterflies) may be decreasing in popularity. As certain tattoos sported by Mexican Mafia members and supporters become mainstream, and because California Department of Corrections is known to use certain tattoos as validation points, Mexican Mafia members may introduce new tattoos to make it difficult for law enforcement and correctional officers to identify membership or affiliation with the group. Tattoos are also increasingly disguised within other tattoos, which can make them more difficult to easily identify.

(U) INDICATION OF MEXICAN MAFIA MEMBERSHIP

(U//LES) Only la EME brothers are allowed to obtain the black hand tattoo. It is considered an honored privilege, but not a requirement, to display the black hand. Inspired by La Costra Nostra’s (Italian Mob) Black Hand of Death.

(U//LES) Translates to the letter “M” in Spanish; a shorthand or secretive way of displaying allegiance to the Mexican Mafia.
NOTE: “EME-SA” indicates membership to MS-13, not Mexican Mafia.

(U//LES) Abbreviation can be potential indication of association or membership to the Mexican Mafia without directly identifying the organization.

(U//LES) Signifies the 13th letter of the alphabet, M, which is pronounced “la EME” in Spanish. Can also be spelled out as “trece.”

(U) Aztec Numbering and Kanpol

(U//LES) Kanpol—directly translating as “south great”—references Aztec numbering and “Sureño.” Lines in Aztec numbering represent 5, and dots represent 1; two lines and three dots add to 13. Tattoos of the Aztec word “matlactomei,” which translates as thirteen, may also be used.

(U//LES) Both Norteños and Sureños identify with Aztec culture and beliefs, but the Aztec warrior shield is most commonly found on Sureños. Advocates an ideology that Sureños are warriors or soldiers, rather than criminals, participating in a worthy cause for their race and culture.

(U//LES) May indicate association with or membership to Mexican Mafia, as Marilyn Monroe’s initials represent “MM.” Recent reporting suggests this tattoo is most likely found on non-validated associates.

(U) Hummingbird and Mariposa

(U//LES) Emerging reporting suggests a shift toward using hummingbird tattoos to portray Huitzilopochtli, an Aztec god of war, to represent being a soldier of Mexican Mafia. Mariposas may also indicate association or membership to Mexican Mafia. Curving of butterfly wings may represent “MM.” Most likely to be seen on “first generation” Mexican Mafia associates.