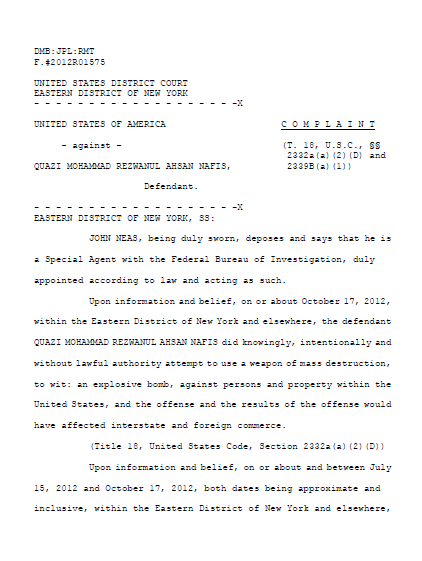 4. In or about early July 2012, NAFIS first contacted an FBI confidential human source (the “CHS”) and subsequently attempted to recruit the CHS into a jihadist cell to carry out a terror attack on U.S. soil. On or about July 5, 2012, the CHS received a call from NAFIS wherein NAFIS advised, in sum and substance, that NAFIS is from Bangladesh but came to the United States to wage “jihad.” NAFIS told the CHS that all Muslims and Muslim sheikhs in the United States are “Talafi,” meaning not true Muslims. NAFIS also told the CHS that NAFIS admired Sheikh “O,” whom the CHS understood to be Osama bin Laden. In addition, NAFIS told the CHS that he admired the magazine starting with “I,” which the CHS understood to be the al-Qaeda-affiliate-sponsored publication “Inspire.”

7. During the period between July 6, 2012 and July 8, 2012, NAFIS, the CO-CONSPIRATOR and the CHS began to communicate via Facebook, an internet social-media website. During these communications, which were consensually recorded by the CHS, the three discussed certain Islamic legal rulings that advise that it is unlawful for a person who enters a country with a visa to wage jihad there. NAFIS stated that he had conferred with another individual in Bangladesh and was advised that he was not bound by such rulings. Accordingly, NAFIS indicated that he believed that he was free to continue with his plan to conduct a terrorist attack on U.S. soil.

9. A few hours later, on or about July 12, 2012 in the early morning, NAFIS told the CO-CONSPIRATOR and the CHS, in sum and substance, that NAFIS had contacts with al-Qaeda members overseas who could assist the group in planning and executing an attack on the high-ranking official. This communication was consensually recorded.

10. On or about July 14, 2012, NAFIS told the CHS, in sum and substance, that NAFIS intended to return to Bangladesh, likely in December 2012, to obtain training from al-Qaeda. This communication was also consensually recorded.

16. On or about August 11, 2012, NAFIS met with the UC in a hotel room in Queens, New York. During that meeting, which was consensually recorded, NAFIS confirmed that he wanted to target the financial district of Manhattan — specifically, the New York Stock Exchange. NAFIS told the UC, in sum and substance, that he wanted to use explosives as part of a suicide attack, either contained in one or more cars, or strapped to his person. NAFIS explained, “We are going to need a lot of TNT or dynamite.” NAFIS also provided the UC with a handwritten map of the area that NAFIS had apparently prepared while scouting the area around the Stock Exchange on or about August 9, 2012.

17. During that same meeting, NAFIS asked the UC whether approval for NAFIS’s proposed attack would come from the “top” of the al-Qaeda leadership. The UC responded, in sum and substance, that he was going to meet with al-Qaeda leadership and advise them about NAFIS’s plan.

18. NAFIS and the UC then traveled to the financial district in Manhattan, and NAFIS took several photographs of prospective targets in that area.

On or about October 12, 2012, NAFIS and the UC met and transported what NAFIS believed to be explosive material to the Warehouse. This meeting was consensually recorded. Upon arriving at the Warehouse, NAFIS and the UC offloaded approximately twenty fifty-pound bags of this purported explosive material into a trailer. NAFIS also gave the UC a tarp that he had previously purchased with his own money to cover the purported explosive device when it was placed in the van. NAFIS also provided the UC with a thumb drive containing an article NAFIS had written about his motivations for his attack. NAFIS believed that this article would be published by Inspire magazine. In that article, NAFIS included quotations from “[o]ur beloved Sheikh Osama bin Laden” to justify the fact that his plot likely involved the killing of women and children. NAFIS also stated the following:

all I had in my mind are how to destroy America . . . I came up to this conclusion that targeting America’s economy is most efficient way to draw the path of obliteration of America as well as the path of establishment of Khilapha.