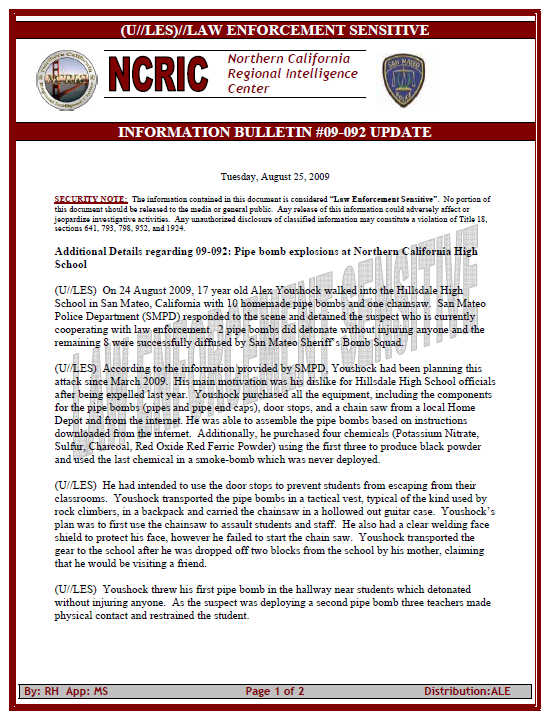 (U//LES) On 24 August 2009, 17 year old Alex Youshock walked into the Hillsdale High School in San Mateo, California with 10 homemade pipe bombs and one chainsaw. San Mateo Police Department (SMPD) responded to the scene and detained the suspect who is currently cooperating with law enforcement. 2 pipe bombs did detonate without injuring anyone and the remaining 8 were successfully diffused by San Mateo Sheriff’s Bomb Squad.

(U//LES) According to the information provided by SMPD, Youshock had been planning this attack since March 2009. His main motivation was his dislike for Hillsdale High School officials after being expelled last year. Youshock purchased all the equipment, including the components for the pipe bombs (pipes and pipe end caps), door stops, and a chain saw from a local Home Depot and from the internet. He was able to assemble the pipe bombs based on instructions downloaded from the internet. Additionally, he purchased four chemicals (Potassium Nitrate, Sulfur, Charcoal, Red Oxide Red Ferric Powder) using the first three to produce black powder and used the last chemical in a smoke-bomb which was never deployed.

(U//LES) He had intended to use the door stops to prevent students from escaping from their classrooms. Youshock transported the pipe bombs in a tactical vest, typical of the kind used by rock climbers, in a backpack and carried the chainsaw in a hollowed out guitar case. Youshock’s plan was to first use the chainsaw to assault students and staff. He also had a clear welding face shield to protect his face, however he failed to start the chain saw. Youshock transported the gear to the school after he was dropped off two blocks from the school by his mother, claiming that he would be visiting a friend.

(U//LES) Youshock threw his first pipe bomb in the hallway near students which detonated without injuring anyone. As the suspect was deploying a second pipe bomb three teachers made physical contact and restrained the student.

(U//LES) A SMPD Officer was on scene immediately and with the teachers assistance detained the suspect and separated the student from his vest that contained an additional 8 pipe bombs.

(U//LES) Youshock operated alone and the investigation has determined no nexus to terrorism or extremism at this time. There was no identified escape plan and Youshock had intended to force police to shoot him. (U//LES) This bulletin is being disseminated for your situational awareness. If you have any information regarding this incident please contact San Mateo PD Lt. Wayne Hoss (650-522-7682) or the NCRIC at (866-367-8847) 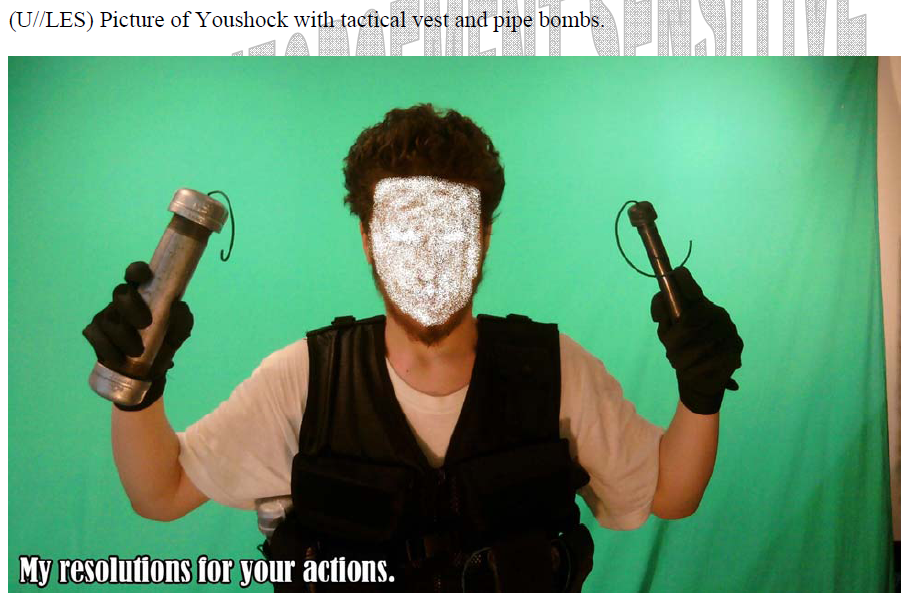