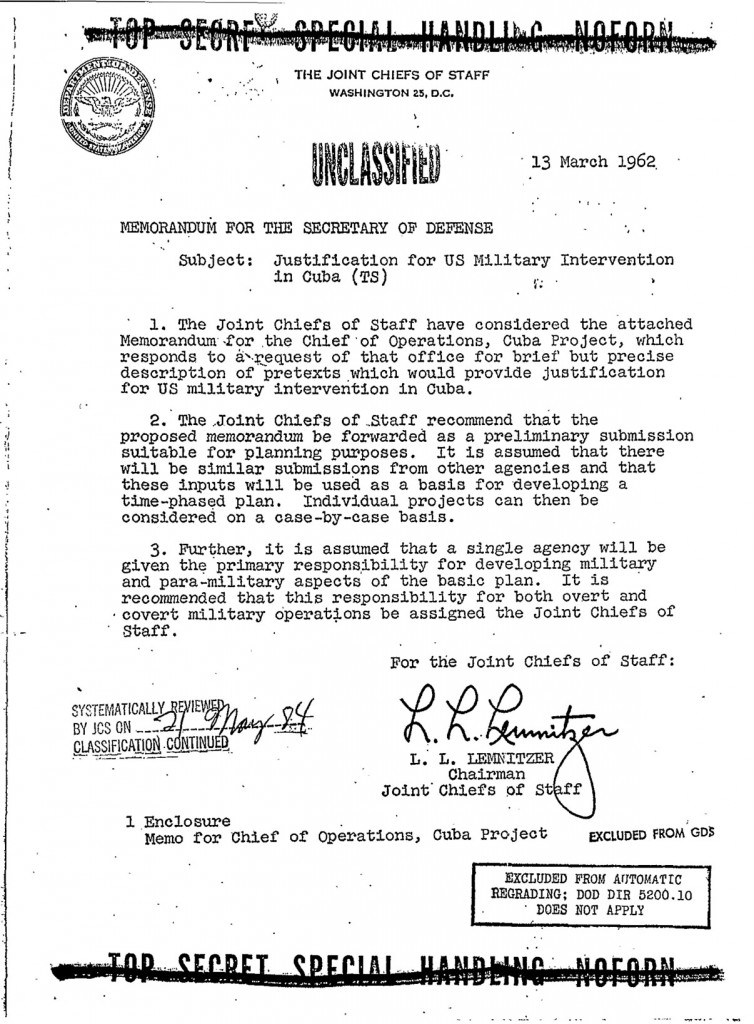 Operation Northwoods was a plan circulated in the U.S. government in 1962 to stage false flag terrorist attacks inside the U.S. and abroad to provoke “military intervention in Cuba”.  The plan called for Central Intelligence Agency (CIA) or other operatives to commit genuine acts of terrorism in U.S. cities and elsewhere. These acts of terrorism were to be blamed on Cuba in order to create public support for a war against that nation, which had recently become communist under Fidel Castro. One part of the Operation Northwoods plan was to “develop a Communist Cuban terror campaign in the Miami area, in other Florida cities and even in Washington.”  The document was signed by Chairman of the Joint Chiefs of Staff Lyman Lemnitzer and reportedly presented to Secretary of Defense Robert McNamara on March 13, 1962. 1 2

The previously Top Secret document was originally made public on November 18, 1997, by the John F. Kennedy Assassination Records Review Board, a U.S. federal agency overseeing the release of government records related to John F. Kennedy’s assassination.3

In the recommendations section of the “Justification for US Military Intervention in Cuba (TS)” memo, the Joint Chiefs of Staff make clear their willingness to stage actual terrorist events with legitimate casualties to sustain their intentions to “intervene” militarily in Cuba’s affairs.  The cumulative effect of many of the recommendations is stated as being to provoke reactions from the Cuban government which would justify “military intervention”.  Many of the suggested actions have a strong component of Psychological Operations (PSYOPS) designed to simultaneously engender domestic U.S. support for “military intervention” while portraying the Cuban government as a rogue, dangerous entity which will internationally serve to justify the U.S. military intervention.  The suggested actions include:

8. It is possible to create an incident which will demonstrate convincingly that a Cuban aircraft has attacked and shot down a chartered civil airliner en route from the United States to Jamaica, Guatemala, Panama or Venezuela. The destination would be chosen only to cause the flight plan route to cross Cuba. The passengers could be a group of college students off on a holiday or any grouping of persons with a common interest to support chartering a non-scheduled flight.

a. An aircraft at Eglin AFB would be painted and numbered as an exact duplicate for a civil registered aircraft belonging to a CIA proprietary organization in the Miami area. At a designated time the duplicate would be substituted for the actual civil aircraft and would be loaded with the selected passengers, all boarded under carefully prepared aliases. The actual registered aircraft would be converted to a drone.

b. Take off times of the drone aircraft and the actual aircraft will be scheduled to allow a rendezvous south of Florida. From the rendezvous point the passenger-carrying aircraft will descend to minimum altitude and go directly into an auxiliary field at Eglin AFB where arrangements will have been made to evacuate the passengers and return the aircraft to its original status. The drone aircraft meanwhile will continue to fly the filed flight plan. When over Cuba the drone will begin transmitting on the international distress frequency a “MAY DAY” message stating he is under attack by Cuban MIG aircraft. The transmission will be interrupted by destruction of the aircraft which will be triggered by radio signal. This will allow ICAO radio stations in the Western Hemisphere to tell the US what has happened to the aircraft instead of the US trying to “sell” the incident.5

7. Hijacking attempts against civil air and surface craft should appear to continue as harassing measures condoned by the government of Cuba.6

4. We could develop a Communist Cuban terror campaign in the Miami area, in other Florida cities and even in Washington.

The terror campaign could be pointed at refugees seeking haven in the United States. We could sink a boatload of Cubans en route to Florida (real or simulated). We could foster attempts on lives of Cuban refugees in the United States even to the extent of wounding in instances to be widely publicized. Exploding a few plastic bombs in carefully chosen spots, the arrest of Cuban agents and the release of prepared documents substantiating Cuban involvement, also would be helpful in projecting the idea of an irresponsible government.7

A “Remember the Maine” incident could be arranged in several forms:

a. We could blow up a US ship in Guantanamo Bay and blame Cuba.

b. We could blow up a drone (unmanned) vessel anywhere in the Cuban waters. We could arrange to cause such incident in the vicinity of Havana or Santiago as a spectacular result of Cuban attack from the air or sea, or both. The presence of Cuban planes or ships merely investigating the intent of the vessel could be fairly compelling evidence that the ship was taken under attack. The nearness to Havana or Santiago would add credibility especially to those people that might have heard the blast or have seen the fire. The US could follow up with an air/sea rescue operation covered by US fighters to “evacuate” remaining members of the non-existent crew. Casualty lists in US newspapers would cause a helpful wave of national indignation.8

5. Blow up ammunition inside the base; start fires.
6. Burn aircraft on air base (sabotage).
7. Lob mortar shells from outside of base into base. Some damage to installations.9

4. Start riots near the base main gate (friendly Cubans)10