The following is an example of a weekly bulletin released by the Orange County Intelligence Assessment Center to local businesses through its “Private Sector Terrorism Response Group” (PSTRG).  The PSTRG was created in “December 2001 to create a private sector partnership [that can] effectively address private sector safety, incident management, employee education and public health consequences of potential attacks on the critical infrastructure within Orange County. Two large groups involved with PSTRG are the Orange County Business Council, of which 80% of the major businesses in Orange County are members, and Technet, a consortium of 28 high tech firms.”  The bulletin includes excerpts of news articles related to terrorism, a list of upcoming events, including dirt bike events and rodeos, as well as a helpful list of upcoming television shows on the History Channel and other networks that relate in some manner to terrorism. 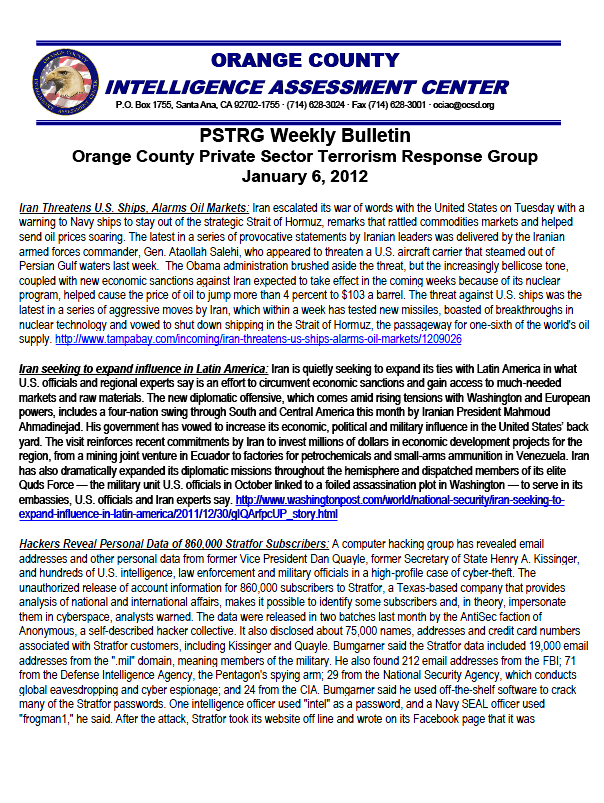 Iran Threatens U.S. Ships, Alarms Oil Markets: Iran escalated its war of words with the United States on Tuesday with a warning to Navy ships to stay out of the strategic Strait of Hormuz, remarks that rattled commodities markets and helped send oil prices soaring. The latest in a series of provocative statements by Iranian leaders was delivered by the Iranian armed forces commander, Gen. Ataollah Salehi, who appeared to threaten a U.S. aircraft carrier that steamed out of Persian Gulf waters last week. The Obama administration brushed aside the threat, but the increasingly bellicose tone, coupled with new economic sanctions against Iran expected to take effect in the coming weeks because of its nuclear program, helped cause the price of oil to jump more than 4 percent to $103 a barrel. The threat against U.S. ships was the latest in a series of aggressive moves by Iran, which within a week has tested new missiles, boasted of breakthroughs in nuclear technology and vowed to shut down shipping in the Strait of Hormuz, the passageway for one-sixth of the world’s oil supply.
http://www.tampabay.com/incoming/iran-threatens-us-ships-alarms-oil-markets/1209026

Iran seeking to expand influence in Latin America: Iran is quietly seeking to expand its ties with Latin America in what U.S. officials and regional experts say is an effort to circumvent economic sanctions and gain access to much-needed markets and raw materials. The new diplomatic offensive, which comes amid rising tensions with Washington and European powers, includes a four-nation swing through South and Central America this month by Iranian President Mahmoud Ahmadinejad. His government has vowed to increase its economic, political and military influence in the United States’ back yard. The visit reinforces recent commitments by Iran to invest millions of dollars in economic development projects for the region, from a mining joint venture in Ecuador to factories for petrochemicals and small-arms ammunition in Venezuela. Iran has also dramatically expanded its diplomatic missions throughout the hemisphere and dispatched members of its elite Quds Force — the military unit U.S. officials in October linked to a foiled assassination plot in Washington — to serve in its embassies, U.S. officials and Iran experts say.
http://www.washingtonpost.com/world/national-security/iran-seeking-to-expand-influence-in-latin-america/2011/12/30/gIQArfpcUP_story.html

Hackers Reveal Personal Data of 860,000 Stratfor Subscribers: A computer hacking group has revealed email addresses and other personal data from former Vice President Dan Quayle, former Secretary of State Henry A. Kissinger, and hundreds of U.S. intelligence, law enforcement and military officials in a high-profile case of cyber-theft. The unauthorized release of account information for 860,000 subscribers to Stratfor, a Texas-based company that provides analysis of national and international affairs, makes it possible to identify some subscribers and, in theory, impersonate them in cyberspace, analysts warned. The data were released in two batches last month by the AntiSec faction of Anonymous, a self-described hacker collective. It also disclosed about 75,000 names, addresses and credit card numbers associated with Stratfor customers, including Kissinger and Quayle. Bumgarner said the Stratfor data included 19,000 email addresses from the “.mil” domain, meaning members of the military. He also found 212 email addresses from the FBI; 71 from the Defense Intelligence Agency, the Pentagon’s spying arm; 29 from the National Security Agency, which conducts global eavesdropping and cyber espionage; and 24 from the CIA. Bumgarner said he used off-the-shelf software to crack many of the Stratfor passwords. One intelligence officer used “intel” as a password, and a Navy SEAL officer used “frogman1,” he said. After the attack, Stratfor took its website off line and wrote on its Facebook page that it was cooperating with law enforcement. AntiSec said it targeted the company in part because it had poor network security.
http://www.latimes.com/news/nationworld/nation/la-na-cyber-theft-20120104,0,90925.story