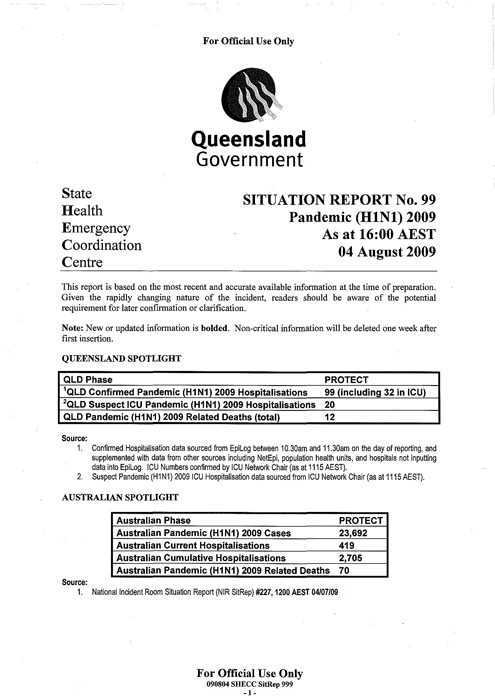 • [03 August 2009] Prince Charles Hospital reported that the facility had three Extra- Corporeal Membrane Oxygenation (ECMO) stations in operation, all three of which were in use by patients with confirmed Pandemic (H1Nl) 2009.

• [30 Jul 09] Townsville HSD reported a youth at Cleveland Detention Centre was displaying influenza like symptoms. The inmate was swabbed, isolated and commenced on Tamiflu, with ten further courses of Tamiflu supplied to the Centre’s nurse. Two further suspected cases have been swabbed, administered Tamiflu and isolated. On Tnesday, 04 Angnst 2009, Townsville HSD reported two positive cases of Pandemic (HlNl) 2009 at the facility.

• [31 Jul 2009] Longreach has now reported their second confirmed Pandemic (H1N1) 2009 case. The patients are one tourist and one local, and neither have required admission to hospital.

• [29 Jul 09] Cape York HSD is reporting the towns of Weipa and Cooktown moved from the CONTAIN phase to the PROTECT phase due to increased community transmission of the Pandemic (H1Nl) 2009 virus. Other outlying areas of the Cape York region (excepting Pormpuraaw) remain at the CONTAIN phase.

• [29 Jul 09] The Cape York HSD are reporting 82 confmned Pandemic CHlNI) 2009 cases across eight communities. To mitigate the impact of the virus on the communities, Queensland Health are undertaking media activities across the region, and letterbox drops in Weipa and Cooktown communities.

• [03 Aug 2009] Mt Isa HSD has reported that the Mt Isa Population Health Unit and the Mt Isa City Council are liaising and in the process of producing various media for the public concerning Pandemic CHINI) 2009 at the forthcoming Mt Isa Rodeo.

• [29 Jul 09] Cairns Base Hospital has established a triage area at the entrance of the Emergency Department as of Tuesday, 28 July 2009. The area is staffed from 0700 to 2300 hours and is intended to section off an area for those who present with Influenza-Like Illness from other ED patients.

• [03 August 09] A 25 year old Pacific Islander male with a significant medical died within a few hours of presentation at Gold Coast Hospital. He presented with a three day history of febrile ILl associated with increasing dyspnoea. His death has since been verified as Queensland’s eleventh Pandemic CHINI) 2009 related fatality.

• [02 Aug 09] Queensland has reported its tenth Pandemic CHlNl) 2009 related death in a Townsville hospital of a 54 year old woman. The patient had underlying medical conditions.

• [04 Aug 09] Mt Isa HSD reported that effective Saturday, 01 August 2009, Flu Clinics in Outpatient Departments were suspended. Presentations will be monitored through the Emergency Department and the clinic will re-open should nnmbers increase.

• [30 Jul 09] Darling Downs- West Moreton HSD reported that a flu clinic would open on Tuesday, 4 August 2009, in Toowoomba if the current level of emergency activity continues.

[04 Aug 09] The Solomon Islands have reported their first confirmed case of Pandemic (HINI) 2009. The person was a member of the Regional Assistance Mission that had flown to the Solomon Islands from Brisbane Thursday, 30 July 2009. The confirmed case and a further twelve colleagues that had travelled on the same flight have been quarantined with one displaying symptoms of ILl. [ABC Radio Australia News, 4/8/09]

[31 Ju12009] On Friday, 31 July 2009, the WHO issued its Pandemic (HINI) 2009 Briefing Note 5- reporting on research conducted in the USA and published Wednesday, 29 July 2009. The WHO
advised that media have drawn attention to the increased risk of severe or fatal illness in pregnant women when infected with the HINI pandemic virus. Several other countries experiencing
widespread transmission of the pandemic virus have similarly reported an increased risk in pregnant women, particularly during the second and third trimesters of pregnancy. An increased risk of foetal
death or spontaneous abortions in infected women has also been reported. [Pandemic (HINI) 2009 Briefmg Note 5, WHO, 31107/09]

[01 Aug 2009]. The New Zealand Capital & Coast District Health Board has reported that 100 out of 4,500 staff in the Wellington region had tested positive for Pandemic (HINI) 2009, about the same
number calling in sick as at this time last year. The hospital has given staff with symptoms the option of taking Tamiflu. [Dominion Post website 0 I Aug 2009]

[31 Ju12009] Media in New Zealand are reporting that the 39 year-old woman who died of pandemic (HIN1) 2009 in Wellington Hospital this week was a front-line health worker at Hutt Hospital. Her death, described as being from rare complications, is the 13th to be officially recorded in New Zealand. [Dominion Post 31107/2009] 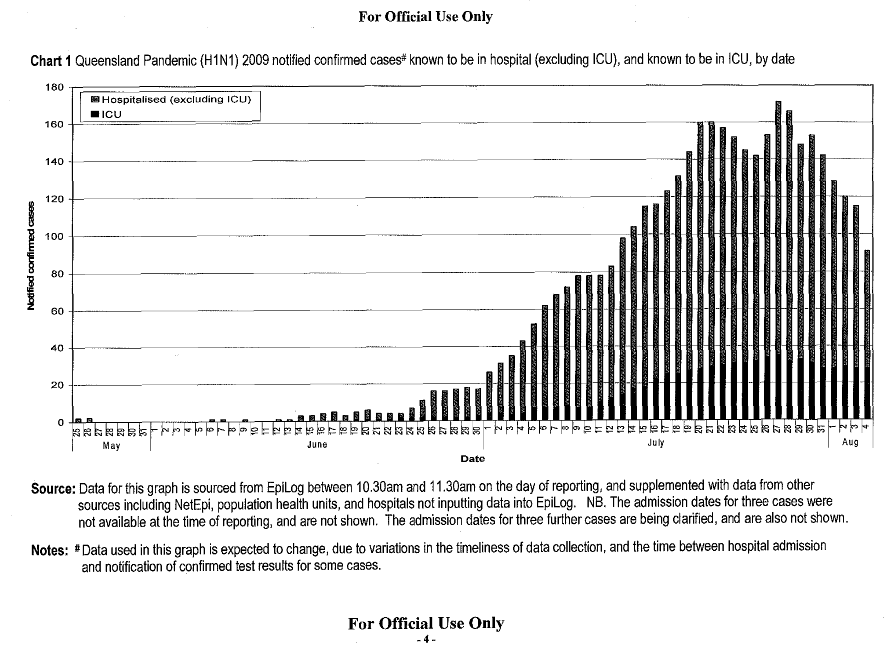