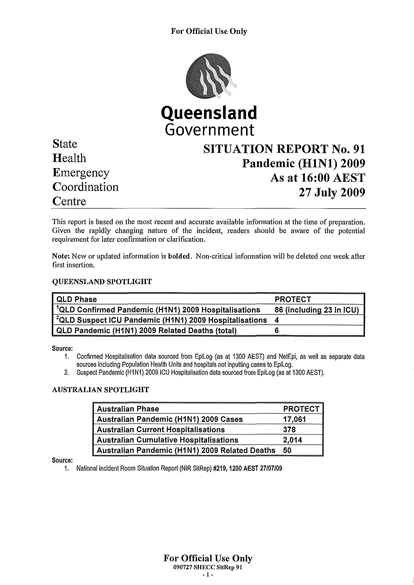 • [22 Jul 09] The strategy to remain in a CONTAIN AND PROTECT Phase for an extended period of time has allowed the Torres Strait and Northern Peninsula district to limit the spread of the Pandemic (HINI) 2009 virus, however, as community transmission is now apparent on a number of islands within the area, the district moved from the CONTAIN AND PROTECT Phase to PROTECT at close of business Wednesday, 22 July 2009.

• [22 Jul 09] The Australian Department of Foreign Affairs and Trade have advised the border between the Torres Strait and Papua New Guinea will remain closed pending a fmiher visit and review by Papua New Guinea government officials. The next review is expected to take place on Monday, 27 July 2009.

• [27 Jul 09] The Cape York HSD are reporting 68 confirmed Pandemic (HtNt) 2009 cases across eight commnnities. To mitigate the impact of the virus on the communities, Queensland Health are nndertaking media activities across the region, and letterbox drops in Weipa and Cooktown communities.

• [22 Jul 09] The discrete Indigenous community of Pormpuraaw in Cape York has moved to the PROTECT Phase. Due to an increase of confirmed Pandemic (H IN I) 2009 cases in the community, nursing and Indigenous Health staff are being re-deployed to Pormpuraaw from the wider district.

• [22 Jul 09] All other communities within the Cape York HSD remain in the CONTAIN Phase, with sentinel swabbing and ongoing surveillance.

• [23 Jul 09] Effective Thursday, 23 July 2009, Mount Isa, Cloncuny and Doomadgee moved from the CONTAIN phase to the PROTECT phase due to increased community transmission of the Pandemic (H I N I) 2009 virus. Other outlying areas of the Mount Isa region remain at the CONTAIN phase.

• [23 Jul 09] The first case of Pandemic (HINI) 2009 has been identified in Mornington Island. Contact tracing is being conducted.

• [26 Jul 09] Queensland has repOlied its sixth Pandemic (HINI) 2009 related death in a 33 year old Brisbane male who was in a vulnerable group and had multiple underlying medical conditions. The man was admitted to hospital on Friday, 17 July 2009, and after spending four days in Intensive Care, died away on Saturday, 25 July 2009.

• [24 July 09] On Friday, 24 July 2009, Queensland repOited its fifth Pandemic (HlNI) related death. A man in his 20s died in a Brisbane south-side hospital today. He was in a vulnerable group. No other details will be released.

• [22 Jul 09] A teenager with multiple underlying medical conditions died in Nambour Hospital. The patient tested positive to Pandemic (HINI) 2009 after being admitted on Sunday, 12 July 2009 with respiratory difficulties.

• [22 Jul 09] A 70 year old male with multiple co-morbidities who died, Wednesday, 22 July 2009. The patient had been admitted to Townsville Hospital as a cardiology inpatient in the Critical Care Unit and had tested positive to Pandemic (HINI) 2009.

[27 Jul 09] The number of Australian confirmed Pandemic (HINI) 2009 cases reported by the National Incident Room is 17,061. This is an increase of293 cases since the last SHECC SitRep.

[26 Jul 09) The New South Wales Department of Health released a statement on Friday, 24 July 2009 advising that as schools in the state were reopening on Monday, 27 July 2009, parents and schools should follow simple measures to reduce the transmission of Pandemic (HIN1) 2009 in the school community. The NSW Chief Health Officer stated that in the past two weeks they had seen a decrease in the number of children aged 5 – 16 years presenting to emergency depmtments with Influenza-Like Illness. School holidays slowed the spread of infection, however, it is inevitable that the case number will rise again in this age group with the return to school. [NSW Health Media Release, 24/07/09)

[26 Jul 09] The European Centre for Disease Prevention and Control (ECDC) stated in the Situation Report on Saturday, 24 July 2009. that Ministers from several Middle Eastern countries had agreed to
prevent the children, the elderly and people with chronic health conditions from attending the Hajj in November, 2009, due to the Pandemic (HIN1) 2009 situation. [ECDC SitRep, 24/07/09]

[26 Jul 09] The Public Health Agency of Canada has repOlted they will partner their National Microbiology LaboratOl), with Intensive Care units across the country in a study to determine how and why severe illness affects some people after they become infected with Pandemic (HIN1) 2009. It will examine risk factors for severe infection, and probe reasons why some people become severely ill very quickly, and also to determine how long a seriously ill person is infectious. The study aims to help physicians, intensivists and emergency care specialists prepare for the anticipated surge of Pandemic (HIN1) 2009 in the Northern Fall. [PHAC, 23/07/09]

• GP consultation rates have risen sharply over the last week in England.

• Under-5s and 5-14 year olds are the age groups predominately affected, with the over 655 continuing to show much lower rates.

• The majority of cases continue to be mild. The provisional number of deaths related to swine flu is 26.

[26 Jul 09] On Friday, 24 July 2009, the New Zealand Ministty of Health had confirmed 2,585 Pandemic (HINl) 2009 cases, and stated the level of illness would be much higher than the number of laboratory confirmed cases repOlted. Testing is now done only in the management of severe cases. Also, many people with Pandemic (H IN l) 2009 are able to look after themselves at home and do not need to see their GP. The total number of Pandemic (HINI) 2009 related deaths in the country remains at eleven. On Friday, 24 July 2009, they had 72 people in hospital, with 23 in Intensive Care. [NZ Government Media Release, 24/07/09]

[24 JULY 2009] WHO repOlts that he number of human cases of pandemic (HINI) 2009 is still increasing substantially in many countries, even in countries that have already been affected for some time. In most countries the majority of pandemic (HINI) 2009 cases are still occurring in younger people, with the median age repOlted to be 12 to 17 years (based on data from Canada, Chile, Japan, UK and the United States of America). Some reports suggest that persons requiring hospitalization and patients with fatal illness may be slightly older.

[24 July 09] The US CDC have repOlted on four children aged between 7 and 17 years who were hospitalised with neurologic complications associated with pandemic (HINl) 2009. All cases have since fully recovered. The CDC repOlt notes that the complications were less severe than those recently described in cases related to seasonal influenza [US CDC MMWR, 24 July 2009].

[23 Jul 09] Media are repOlting an additional two instances of the Pandemic (HINI) 2009 virus showing Tamiflu resistance. The first instance was in a 60 year old Canadian male who had been given the antiviral after a family member was confirmed to have Pandemic (HINI) 2009. Media reported there was no evidence the man transmitted the resistant strain to anyone else. The second case of resistance was identified in the city of Yamaguchi, Japan. This case had been given the antiviral as post-exposure prophylaxis. The person has since recovered, and there appears to have been no transmission. The virus was sensitive to Relenza. There have now been five cases of Tamiflu resistance repmted globally. [Canadian Press, 23/07/09] 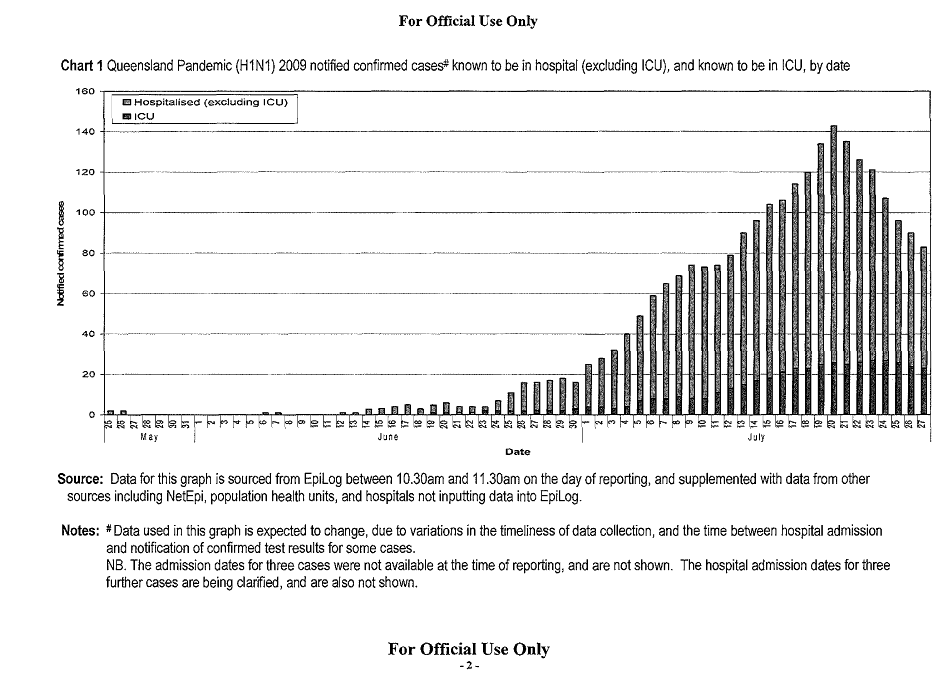