Rebuild Your Local Economy With the Drone Industry 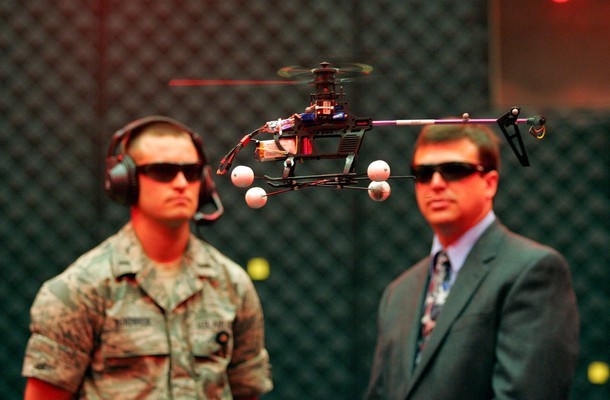 Is your state in need of a growth industry that can employ large numbers of people and contribute to the local economy?  You may want to consider expanding your state’s role in the drone industry.  It may sound like an unusual way to rebuild local economies, but that’s just what a number of states around the country have decided to do.  Ohio, in particular, has made attracting the drone industry a major component of its statewide economic strategy, hoping to encourage local economic growth and create jobs by making the state the premier location for drone testing and research in the U.S.  To further these efforts, the State of Ohio has worked with several business development groups to create the Ohio Unmanned Aircraft Systems (UAS) Initiative to promote the state’s prominent role in the drone industry.  The potential job growth presented by the Ohio UAS Initiative makes it a priority for the state, which has lost more than 369,097 manufacturing jobs in the last decade.

The Ohio UAS Initiative aims to make Ohio “the destination of choice for all UAS researchers, developers, manufacturers, suppliers, trainers and educators.”  At a roundtable conference held earlier this year, proponents of the initiative argued that Ohio is uniquely positioned to be the national leader for future development in the drone industry. A talking points card instructs proponents of the Ohio UAS Initiative that the state has “assets that support all facets of UAS development and operations” and wants to become the leading center of innovation and collaboration in the drone industry. According to the Ohio Aerospace & Business Aviation Advisory Council, aerospace and defense is one of Ohio’s top industries, employing more than 100,000 people in the state.  Unlike many of Ohio’s other industries, the market for both commercial and military drones, which already is valued at approximately $4.5 billion a year, is seen as rapidly expanding and set to double in value by 2019.  The rush to build Ohio’s image as a center of drone production and testing has even led a local community college to offer certificate programs in the technical maintenance and piloting of drones.  The college has already created the first non-military UAS simulation center for training pilots of unmanned aircraft and it has plans to make the first National Center for UAS Training and Certification. 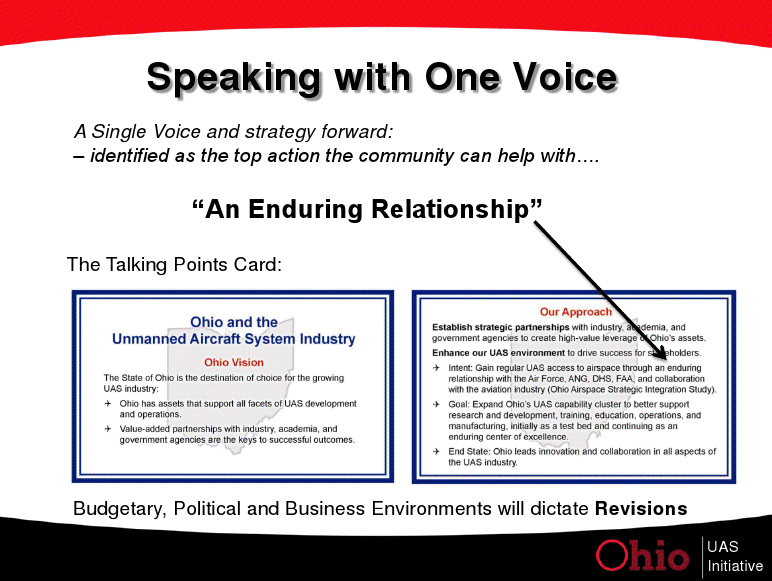 A presentation slide for the Ohio UAS Initiative describes talking points for proponents of the initiative to help emphasize Ohio's position in the drone industry.

A major partner in the Ohio UAS Initiative is the Air Force Research Laboratory (AFRL) which is headquartered at Wright-Patterson Air Force Base just outside of Dayton, Ohio.  The AFRL plays a leading role in the design of drone technology for the Air Force and sees the area as an ideal location for testing and development efforts aimed at integrating drones into the National Airspace System (NAS).  Since 2009, the AFRL has been working with the Federal Aviation Administration (FAA) on a Next Generation Air Traffic System capable of integrating drones safely and efficiently into the NAS.  Last March, several government agencies produced a UAS Research and Development Roadmap addressing long-term goals for incorporating drones into the NAS by funding research on improved sense and avoid capabilities and efforts to obtain a dedicated frequency range for ground control data links.  The problems of frequency allocation and mid-air collision are significant obstacles to the widespread use of drones within the domestic airspace and a primary goal of the Ohio UAS Initiative is to create an “enduring relationship” with the FAA for testing and development that addresses these challenges.  In fact, the prospect of long-term economic growth from the expanding drone industry is so appealing to Ohio that the state legislature recently passed a resolution affirming the state’s intent to to form a lasting partnership with the FAA for drone testing and research.  The text of the resolution states that in “the next 15 years, more than 23,000 jobs could be created in the United States as a result of integration of Unmanned Aerial Systems in the National Airspace System, according to the Association of Unmanned Vehicle Systems International (AUVSI).”

In order to clear the way for increased drone testing and research in Ohio, the Dayton Development Coalition and Science Applications International Corporation (SAIC), a major defense contractor with substantial operations in Dayton, are conducting a multi-year study led by “senior executives of military and civilian stakeholder organizations.”  The Ohio Airspace Strategic Integration Study (OASIS) will help to generate “short and long term safe, secure and efficient solutions for military UAS airspace requirements in collaboration with all stakeholders within the national airspace system.”

Many of the companies participating in efforts to increase Ohio’s involvement in the drone industry, including SAIC, are also members of the drone industry trade group AUVSI, which works to promote the interests of drone manufacturers around the world. A spokesman for the AUVSI recently told Salon that the organization is initiating a P.R. campaign to counter negative perceptions of drones, particularly on topics related to privacy and their use in targeted killings overseas.  The campaign will reportedly include advertising aimed at promoting positive applications of drone technology in disaster response and other humanitarian situations.  Presumably, the potential for economic growth and job creation in local economies will continue to remain one of the drone industry’s most attractive attributes as they seek to create a more positive public image.  As an increasingly large number of states around the U.S. face severe economic problems, you may soon see the drone industry coming to a city near you.