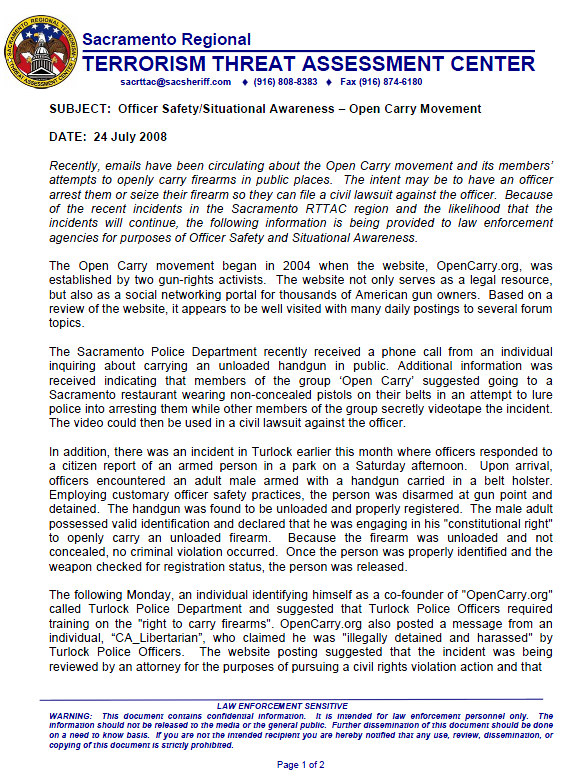 Recently, emails have been circulating about the Open Carry movement and its members’ attempts to openly carry firearms in public places. The intent may be to have an officer arrest them or seize their firearm so they can file a civil lawsuit against the officer. Because of the recent incidents in the Sacramento RTTAC region and the likelihood that the incidents will continue, the following information is being provided to law enforcement agencies for purposes of Officer Safety and Situational Awareness.

The Open Carry movement began in 2004 when the website, OpenCarry.org, was
established by two gun-rights activists. The website not only serves as a legal resource,
but also as a social networking portal for thousands of American gun owners. Based on a
review of the website, it appears to be well visited with many daily postings to several forum
topics.

The Sacramento Police Department recently received a phone call from an individual
inquiring about carrying an unloaded handgun in public. Additional information was
received indicating that members of the group ‘Open Carry’ suggested going to a
Sacramento restaurant wearing non-concealed pistols on their belts in an attempt to lure
police into arresting them while other members of the group secretly videotape the incident.
The video could then be used in a civil lawsuit against the officer.

In addition, there was an incident in Turlock earlier this month where officers responded to
a citizen report of an armed person in a park on a Saturday afternoon. Upon arrival,
officers encountered an adult male armed with a handgun carried in a belt holster.
Employing customary officer safety practices, the person was disarmed at gun point and
detained. The handgun was found to be unloaded and properly registered. The male adult
possessed valid identification and declared that he was engaging in his “constitutional right”
to openly carry an unloaded firearm. Because the firearm was unloaded and not
concealed, no criminal violation occurred. Once the person was properly identified and the
weapon checked for registration status, the person was released.

The following Monday, an individual identifying himself as a co-founder of “OpenCarry.org”
called Turlock Police Department and suggested that Turlock Police Officers required
training on the “right to carry firearms”. OpenCarry.org also posted a message from an
individual, “CA_Libertarian”, who claimed he was “illegally detained and harassed” by
Turlock Police Officers. The website posting suggested that the incident was being
reviewed by an attorney for the purposes of pursuing a civil rights violation action and that there was an audiotape recording of the entire incident. In addition, the individual
confronted and detained by officers was not a Turlock resident and his posting related his
experiences of openly carrying firearms throughout different communities.

Based on a review of their website, it appears that the Open Carry movement is spreading
to this region. The founders are based on the east coast and much of the activity has been
in that area, but recent activity in the central valley and some of the forum postings indicate
that law enforcement agencies in California may experience an increase in the number of
Open Carry encounters in their jurisdictions.

If you logon to their website www.opencarry.org and click on “Our Forum” at the top left,
then scroll down to “California”, you will see that there are 7 pages of postings, all with a
sizeable number of replies. Included in the postings are the Turlock P.D. incident and the
Sacramento P.D. incident (including the High Priority internal memo) as well as meetings
and “meet and greets” that have either taken place or are being planned throughout
California. All California law enforcement personnel should be aware of the following
firearms laws in case they are confronted with a subject openly carrying a firearm.

• PC 12025 (f), unloaded firearms carried openly in belt holsters are not concealed
within the meaning of section 12025.

• PC 12025 only applies to concealable firearms, which is defined in PC 12001(a) as a
pistol, revolver or firearm with a barrel less than 16 inches. There is nothing
prohibiting someone from carrying an unloaded, concealed rifle or shotgun on their
person or in their vehicle unless the barrel is less than 16 inches.

• PC 12031(g), A firearm shall be deemed to be loaded for the purposes of this
section when there is an unexpended cartridge or shell in, or attached in any manner
to, the firearm, including, but not limited to, in the firing chamber, magazine, or clip
thereof attached to the firearm. **Case law now states the ammunition must be in a
position from which is can be fired (People. v. Clark)

• PC 12031(e), in order to determine whether or not a firearm is loaded for the
purpose of enforcing this section, peace officers are authorized to examine any
firearm carried by anyone on his or her person or in a vehicle while in any public
place or on any public street in an incorporated city or prohibited area of an
unincorporated territory. Refusal to allow a peace officer to inspect a firearm
pursuant to this section constitutes probable cause for arrest for violation of this
section.