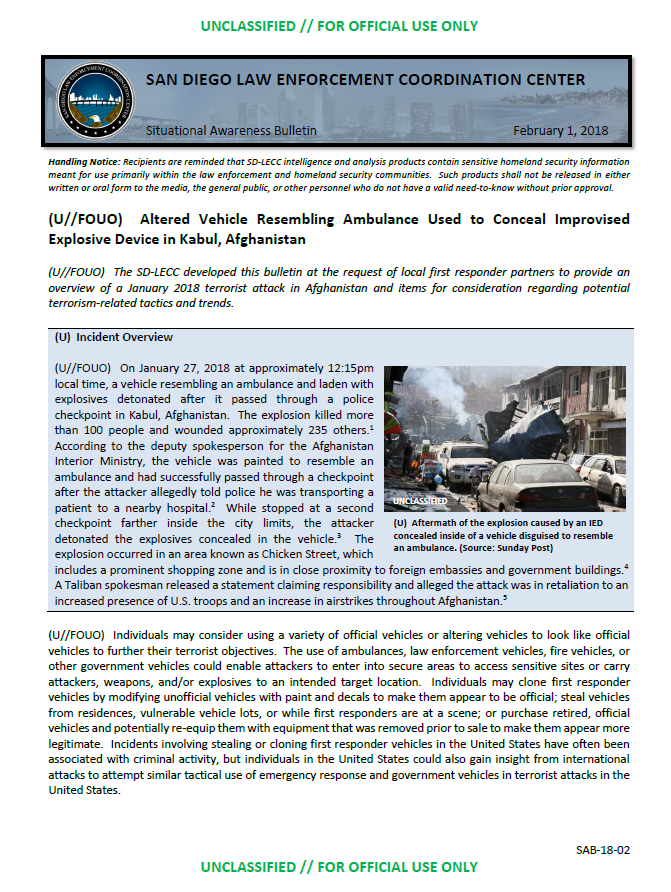 (U//FOUO) On January 27, 2018 at approximately 12:15pm local time, a vehicle resembling an ambulance and laden with explosives detonated after it passed through a police checkpoint in Kabul, Afghanistan. The explosion killed more than 100 people and wounded approximately 235 others. According to the deputy spokesperson for the Afghanistan Interior Ministry, the vehicle was painted to resemble an ambulance and had successfully passed through a checkpoint after the attacker allegedly told police he was transporting a patient to a nearby hospital. While stopped at a second checkpoint farther inside the city limits, the attacker detonated the explosives concealed in the vehicle. The explosion occurred in an area known as Chicken Street, which includes a prominent shopping zone and is in close proximity to foreign embassies and government buildings. A Taliban spokesman released a statement claiming responsibility and alleged the attack was in retaliation to an increased presence of U.S. troops and an increase in airstrikes throughout Afghanistan.

(U//FOUO) Individuals may consider using a variety of official vehicles or altering vehicles to look like official vehicles to further their terrorist objectives. The use of ambulances, law enforcement vehicles, fire vehicles, or other government vehicles could enable attackers to enter into secure areas to access sensitive sites or carry attackers, weapons, and/or explosives to an intended target location. Individuals may clone first responder vehicles by modifying unofficial vehicles with paint and decals to make them appear to be official; steal vehicles from residences, vulnerable vehicle lots, or while first responders are at a scene; or purchase retired, official vehicles and potentially re-equip them with equipment that was removed prior to sale to make them appear more legitimate. Incidents involving stealing or cloning first responder vehicles in the United States have often been associated with criminal activity, but individuals in the United States could also gain insight from international attacks to attempt similar tactical use of emergency response and government vehicles in terrorist attacks in the United States.