How to Stop Killing Afghan Civilians 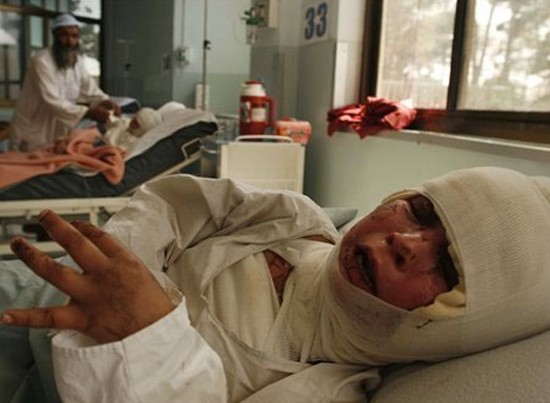 Nazanin, 6, an Afghan girl who was wounded in a coalition air strike in Bala Baluk, recovers in a hospital in Herat in May 2009.  The incident at Bala Baluk is cited in a recent U.S. Army handbook as a major factor in decisions to update coalition procedures to reduce further Afghan civilian casualties. Photo via AP.

The problem of civilian casualties in Afghanistan has presented substantial tactical difficulties for coalition forces according to a recent U.S. Army handbook.  Produced by the Center for Army Lessons Learned (CALL) and released to soldiers on a restricted basis in June, the handbook presents best practices for reducing civilian casualties (CIVCAS) and offers strategies for mitigating the negative effects of casualties among local populations.

The Afghanistan Civilian Casualty Prevention handbook emphasizes the tremendous impact that CIVCAS incidents have on the coalition’s population-centric counterinsurgency strategy.  The handbook states that the “impact of CIVCAS has increased to the point that single tactical actions can have strategic consequences and limit overall freedom of action” for the entire force.  Since 2005, minimizing CIVCAS incidents has been a priority for coalition forces due to the “increased transparency of war, where tactical actions can be recorded and transmitted worldwide in real time.”  A major turning point in efforts to reduce CIVCAS came in 2009 when U.S. Air Force fighter jets bombed a series of buildings in Bala Baluk holding mostly women, children and the elderly who had taken refuge following a fierce battle between coalition forces and Taliban fighters.  The incident resulted in anywhere from 86-145 casualties, depending on the source, and was widely reported as one of the worst CIVCAS incidents in the history of the war.  A video of the incident was reportedly leaked to WikiLeaks by Bradley Manning in January 2010.  The video, which was encrypted and hasn’t yet been publicly released, has been discussed at Manning’s Article 32 hearing.

The CALL handbook describes the reduction of CIVCAS incidents as a “strategic as well as a tactical issue” that can threaten “success in the counterinsurgency mission in Afghanistan.”  The reduction of casualties is thus a “win-win scenario” as it both reduces harm to civilians and maintains “mission effectiveness” by not harming relations with the local population.

Tactical Patience and Escalation of Force

One of the easiest methods for reducing CIVCAS incidents, according to the CALL handbook, is the employment of “tactical patience” when assessing a situation and determining whether the use of force is justified or necessary.  Often, the behavior of Afghan civilians can be viewed as unusual by those from other countries and “many Afghans have been shot because they were behaving in a way that was unexpected or misunderstood by coalition forces.”  Likewise, mundane actions by civilians can sometimes be misconstrued as indicating harmful intent.  This often leads to unnecessary use of force that can result in CIVCAS incidents.

Due to this potential for confusion, soldiers can only employ their rules of engagement properly if they are aware of the pattern of life (POL) for a given environment.  Knowing the POL and the typical behaviors of a local population helps soldiers to distinguish friend from foe by setting “expectations for the level of enemy and civilian activity in the expected target area.”  For example, the CALL handbook states that Afghans are known for driving erratically, partly due to culture and partly out of fear.  In both Iraq and Afghanistan, this led to a number of high-profile incidents where coalition forces opened fire on vehicles containing civilians.  This led some forces to develop “in-theater training packages to exercise discrimination in challenging and realistic situations to provide a baseline understanding of ‘normal’ for their specific operating environment.”  Part of this training involves the employment of “tactical alternatives” to the immediate escalation of force.

Several examples of situations where tactical patience and the employment of tactical alternatives could prevent CIVCAS are described in the handbook:

Another example commonly repeated throughout the handbook is the identification of farmers or people digging as either hostile or emplacing improvised explosive devices (IEDs):

The handbook makes clear that attempts to mitigate CIVCAS incidents by increasing soldiers’ awareness of alternatives to the use of force “was driven not by international law but by an operational imperative: minimizing CIVCAS was viewed as a critical element to the population-centric [counterinsurgency] campaign.”  Several CALL handbooks have previously addressed these issues, including the 2009 Escalation of Force: Afghanistan and 2011 Rules of Engagement Vignettes.  Each of the handbooks attempts to demonstrate tactical alternatives in various situations that soldiers might encounter and make it clear that simply because the use of force is legally justified, it is not always a smart strategic decision.

When CIVCAS incidents do occur, soldiers must be ready to perform “consequence management” that analyzes the reasons for the casualties, makes amends with local leaders as well as the families of those affected and works to counter any potential media fallout from the incident.  Soldiers must “always be prepared to conduct consequence management”  for ISAF-caused civilian harm as those “ineffective in addressing civilian harm in Afghanistan can turn a village against international forces, put troops at further risk of retaliation, and cause strategic fallout at the national and international levels.”

One “critical aspect” of consequence management, according to the CALL handbook, is the condolence payment. The handbook advises that “units need to exercise the complete process for these payments — from making the payment to how they will track how much they have paid and to whom.”  A condolence payment that is “accompanied by a sincere apology”  is a key element of managing the consequences of CIVCAS incidents.  The guidelines for condolence payments in Afghanistan are described in the Money as a Weapons System (MAAWS) Standard Operating Procedures.  These payments “can be paid to express sympathy” resulting from casualties caused by coalition forces or damage to civilian property.  Since 2005, the U.S. government has paid tens of millions of dollars in Iraq and Afghanistan to individual families and communities in the form of condolence payments.

Incidents that involve air-to-ground engagements are “on average . . . the most lethal type of civilian casualty (CIVCAS) incident” and thus tend to result in the greatest level of media coverage. The CALL handbook states that a “common enemy [tactic] is to call news ‘stringers’ within one to two hours of airstrikes and report CIVCAS, either reporting exaggerated numbers or reporting casualties when in fact there were none.”  The handbook recommends working with local leaders through a process of “key leader engagement” to counter enemy propaganda and cultivate “relationships with local journalists and opinion leaders and provide them updates regularly by cell phone or face-to-face meetings.”  If needed, the handbook states that recorded video from aerial platforms can be “declassified, if necessary, and shared with Afghan leaders in key leader engagements.”

Utilizing an “Afghan face on any messages going to the local populace” can also help consequence management efforts as “Afghans are more likely to believe another Afghan than they are a foreign force.”  Soldiers are instructed to “consider how they would react if their own families were in a similar situation” and remember that they are dealing with people “who have lost loved ones can experience extreme and intense emotions, such as grief and anger.”  The handbook recommends that soldiers be sensitive to those affected and “address the anger through an apology, explain what happened, and promise that the incident will be investigated so it can be learned from and not repeated in the future.”