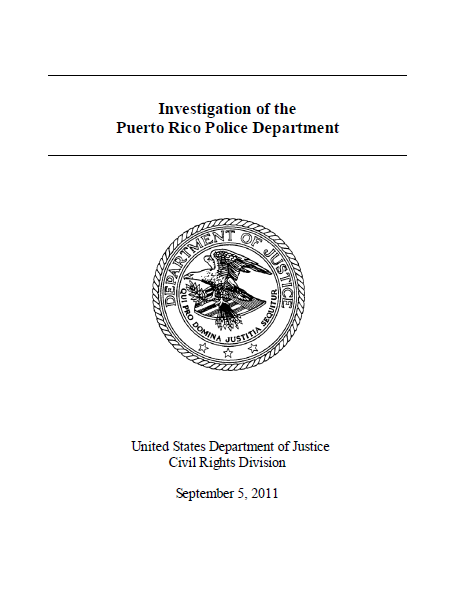 The Puerto Rico Police Department is Puerto Rico’s primary law enforcement agency. Its mission is critical: To protect and serve the residents of Puerto Rico by designing and implementing policies and practices that control crime, ensure respect for the Constitution and the rule of law, and enable the Department to enjoy the respect and confidence of the public.

Many hard working and dedicated PRPD officers serve the public with distinction under often challenging conditions. Unfortunately, PRPD is broken in a number of critical and fundamental respects that are clearly actionable under the Violent Crime Control and Law Enforcement Act of 1994, 42 U.S.C. § 14141 (“Section 14141”). Based on our extensive investigation, we find reasonable cause to believe that PRPD officers engage in a pattern and practice of:

In addition to these findings, our investigation uncovered other deficiencies of serious concern. In particular, there is troubling evidence that PRPD frequently fails to police sex crimes and incidents of domestic violence, and engages in discriminatory policing practices that target individuals of Dominican descent in violation of the Fourteenth Amendment, the Safe Streets Act, and Title VI. At this time, we do not make a formal finding of a pattern and practice violation in these areas, in part because PRPD does not adequately collect data to evaluate these issues. However, we are quite concerned that PRPD lacks basic systems of accountability to ensure that all individuals are treated equally by PRPD officers, regardless of race, ethnicity, national origin, or sex as required by federal law. Furthermore, our investigation raises serious concerns that PRPD policies and practices are woefully inadequate to prevent and address domestic violence committed by PRPD officers. We find that these deficiencies will lead to constitutional violations unless they are addressed. PRPD’s continued failure to keep necessary data in light of our findings and despite knowledge of these indicators of a very serious problem, may constitute a pattern and practice that violates federal law.