(U//FOUO) Jakarta Hotel Bombings: A Look at Insider Threats and the Targeting of Western Executives 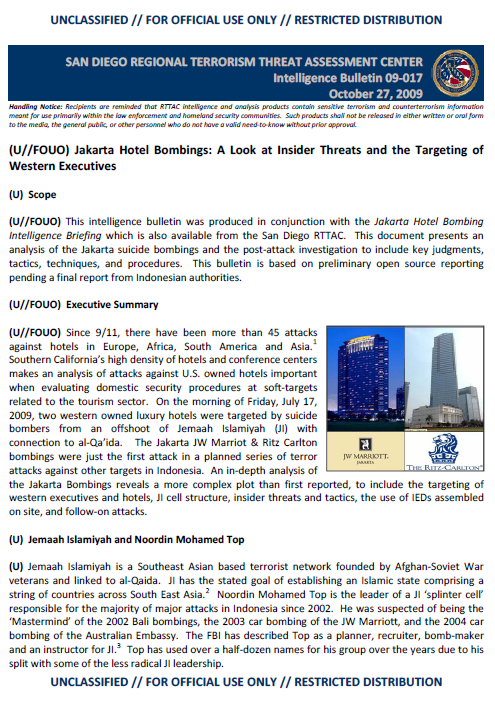 (U//FOUO) This intelligence bulletin was produced in conjunction with the Jakarta Hotel Bombing Intelligence Briefing which is also available from the San Diego RTTAC. This document presents an analysis of the Jakarta suicide bombings and the post‐attack investigation to include key judgments, tactics, techniques, and procedures. This bulletin is based on preliminary open source reporting pending a final report from Indonesian authorities.

(U//FOUO) Since 9/11, there have been more than 45 attacks against hotels in Europe, Africa, South America and Asia.1 Southern California’s high density of hotels and conference centers makes an analysis of attacks against U.S. owned hotels important when evaluating domestic security procedures at soft‐targets related to the tourism sector. On the morning of Friday, July 17, 2009, two western owned luxury hotels were targeted by suicide bombers from an offshoot of Jemaah Islamiyah (JI) with connection to al‐Qa’ida. The Jakarta JW Marriot & Ritz Carlton bombings were just the first attack in a planned series of terror attacks against other targets in Indonesia. An in‐depth analysis of the Jakarta Bombings reveals a more complex plot than first reported, to include the targeting of western executives and hotels, JI cell structure, insider threats and tactics, the use of IEDs assembled on site, and follow‐on attacks.

(U) Jemaah Islamiyah is a Southeast Asian based terrorist network founded by Afghan‐Soviet War veterans and linked to al‐Qaida. JI has the stated goal of establishing an Islamic state comprising a string of countries across South East Asia.2 Noordin Mohamed Top is the leader of a JI ‘splinter cell’ responsible for the majority of major attacks in Indonesia since 2002. He was suspected of being the ‘Mastermind’ of the 2002 Bali bombings, the 2003 car bombing of the JW Marriott, and the 2004 car bombing of the Australian Embassy. The FBI has described Top as a planner, recruiter, bomb‐maker and an instructor for JI. Top has used over a half‐dozen names for his group over the years due to his split with some of the less radical JI leadership.

(U) Ibrohim Muharram, a 37 year old father of four, had worked at the two hotels as a florist for two years prior to the suicide bombings. Ibrohim was key to the JI cells’ pre‐operational planning by providing access and intelligence. Ibrohim, who was recruited by JI in 2000, accompanied the two bombers, Dani Dwi Permana and Nana Ikhwan Maulana (18 & 28 years old respectively), on their dry run and final reconnaissance of the targeted hotels on July 8, 2009. The two suicide bombers visited the hotel no less than four times during the month prior to the attacks. Two days before the attack, on July 15, 2009, the suicide bombers checked into a deluxe room at the JW Marriott.

(U) Three individuals, including one Malaysian and one Saudi national, have been detained in connection with the funding of the suicide bombings carried out in Jakarta. Indonesian authorities believe the money was wired from Saudi Arabia to Thailand, where money was then couriered into Malaysia and Indonesia. The 2003 investigation of the car bombing of the same JW Marriott carried out by Noordin Mohamed Top’s group uncovered a similar funding pattern. In 2003, individuals in the Middle East transferred $30,000 USD to Pakistan, after which the money was couriered to Thailand, Malaysia, and then finally into Indonesia.

(U//FOUO) The terror cell smuggled five explosive devices into the JW Marriott hotel room through the hotel loading dock. The suicide bombers left one device on a timer in the hotel room, but this device failed to detonate. The explosive devices were constructed in backpacks, trolley bags, and a laptop case each lined with bolts to increase casualties. Each bag held approximately ten pounds of black powder per device in a plastic container. All five devices were constructed with homemade detonators, ‘push delay switches,’ and nine volt batteries as the power supply.

(U//FOUO) The four devices detonated by the suicide bombers (two per bomber) were powerful enough to damage multiple floors of the hotel, as well as adjacent structures. Indonesian authorities have described the explosive devices used by the Jakarta suicide bombers as “identical” to devices and explosive material previously used by JI. The unexploded IED left in the hotel room closely resembles the device used in the Bali attacks in 2005.

(U//FOUO) The two hotels have a combined staff of 1290 personnel and of those 254 are involved in loss prevention or security. The majority of the security personnel (173) were out‐sourced from Wira Sandi Group, a local security company. After the November 2008 Mumbai hotel attacks, Marriott International implemented new Standard Operation Procedures for dealing with a suspicious guest. This program called “See Something, Say Something!” was a series of posters hung in non‐public areas of the hotel chain to increase employee awareness.
Four executives were killed and four wounded in the attack.

(U//FOUO) The Targeting of Western Executives

(U//FOUO) The suicide bomber who detonated in the JW Marriott forced his way past hotel employees and into a private breakfast meeting of western executives and trade officials. A Marriott employee who survived the blast reported the bomber claimed to have something for his boss in the meeting as he forced his way into the private room.

(U//FOUO) The private meeting targeted by JI was made up of corporations involved in oil and natural gas exploration. The claim of responsibility which followed the attack spelled out the target as the “thieves and robbers of things of value to the Muslims of this country.” Al‐Qa’ida leadership has repeatedly called upon terror groups to target those believed to be stealing “Muslim natural resources.”

(U//FOUO) This is the first post‐9/11 case of a terrorist group specifically targeting a multi‐national group of western executives. The low casualty numbers and limited media coverage would suggest that terror groups will reevaluate the effectiveness of this type of target in the future. Terror plots often resurface in more deadly and effective incarnations. If a terror group chooses to target executives in the future, they will need to identify targets and techniques that will result in a high number of casualties and increased media coverage.

(U//FOUO) The Post Attack Investigation and a Second Insider

(U//FOUO) The exploitation of documents and computers recovered during a series of raids against the JI ‘splinter cell’ revealed a series of attacks to be carried out by the group during the following months. The targets included the Presidential residence, a national airline, the American Express and DBS Bank Buildings. The investigation also uncovered the previous employment of Ibrohim Muharram’s brother‐in‐law Muhammad Syahrir, described as a skilled bomb‐maker, at the Jakarta International Airport with a national airline. In a statement to the Indonesian Parliament, the Indonesian National Police Chief described Muhammad Syahrir’s infiltration of the airline as a means to carry out a “bigger attack” against Indonesia’s airline sector. Reporting from Indonesian authorities related to the “bigger attack’” varies from the detonation of explosive devices on aircraft in flight to crashing an airliner into a Jakarta high rise building.

(U//FOUO) The investigation also uncovered videos of the suicide bombers and the hotel insider Ibrohim discussing the planned attacks outside of the Ritz Carlton. Dani Dwi Permana, one of the two suicide bombers, expressed his commitment to the operation by stating the following: “This is not suicide. Suicide is for desperate people. I am not desperate. I am doing God’s orders.” The bombers also called for the destruction of Australia and the United States in the video. 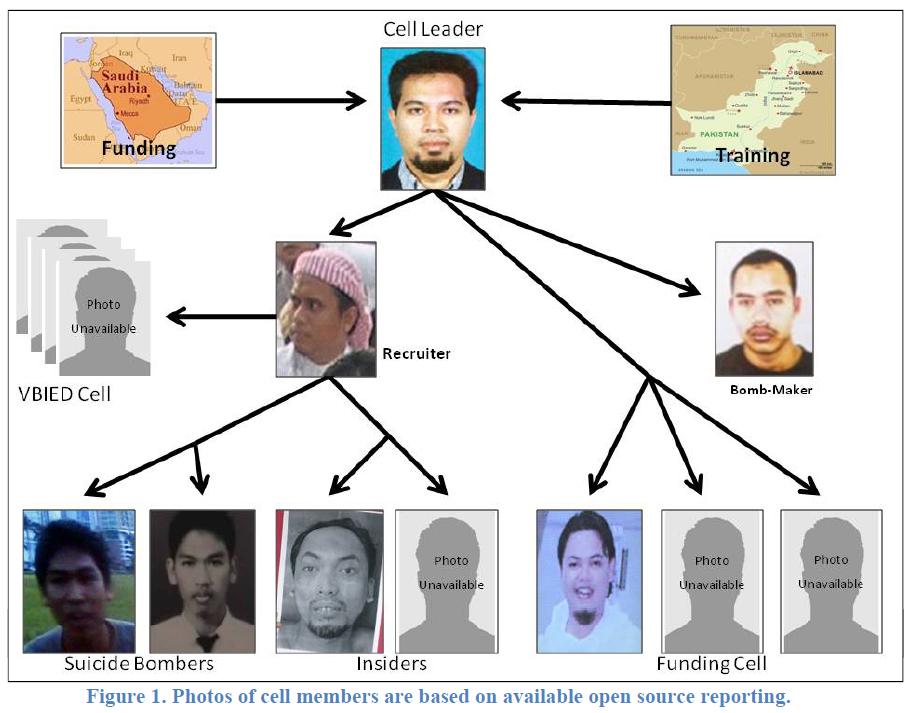